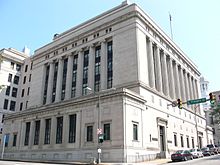 The Supreme Court building in Richmond.

The Supreme Court of Virginia is the highest court in the Commonwealth of Virginia and is made up of seven justices. It primarily hears appeals from the trial-level city and county Circuit Courts.

Although the Supreme Court of Virginia possesses both original and appellate jurisdiction, its primary function is to review decisions of lower courts, including the Court of Appeals, from which appeals have been allowed. Virginia does not allow an appeal to the Supreme Court as a matter of right except in cases involving the State Corporation Commission, attorney disciplinary actions including the disbarment of an attorney, and review of the death penalty.

The court's original jurisdiction is limited to cases of habeas corpus (ordering one holding custody to produce the detained person before the court for the purpose of determining whether such custody is proper), mandamus (ordering the holder of an office to perform his duty), prohibition (ordering an action stopped in a lower court), and writs of actual innocence pursuant to Virginia's Code § 19.2–327.2. It also has original jurisdiction for challenges to decisions of the State Corporation Commission pursuant to Article IX of the Constitution of Virginia [1]. The Supreme Court also has original jurisdiction in matters filed by the Judicial Inquiry and Review Commission relating to judicial censure, retirement, and removal of judges.

The Court of Appeals has authority to hear appeals as a matter of right from:

The Court of Appeals has authority to consider petitions for appeal from:

The jurisdiction of the GDC is generally limited to traffic cases and other misdemeanors, civil cases involving amounts of under $25,000.

The GDCs are not courts of record, meaning that they do not keep detailed records of their proceedings and their decisions provide no precedent to be cited in other proceedings. Proceedings before the GDC are less formal than those brought before higher courts in the state. They do not conduct jury trials; cases are heard and decided by the judge. In civil cases, they are only empowered to award legal damages, and generally cannot provide remedies in equity, such as injunctions or declaratory judgments.

The Juvenile and Domestic Relations District Court (J&DR court) is the low level court dealing with domestic matters, with each case being heard by a single judge.

It handles all cases involving juvenile crime, child abuse or child neglect, disputes involving custody and visitation, and other family-related matters, as well as cases in which a child or family member is an alleged victim (it can try misdemeanors, but only preliminary hearings in adult felonies). The court also has authority to allow minors, under certain circumstances, to seek abortions. It may also emancipate a child.

By statute, the Chief Justice is chosen by a majority vote of the seven justices of the Supreme Court. The Chief Judge of the Court of Appeals is elected by a vote of the eleven Court of Appeals judges for a term of four years. The state has 120 Circuit Courts divided among 31 judicial circuits. The clerk of the Circuit Court is a constitutional officer and chief administrator of the Circuit Court. There are 32 General District Court districts, each having at least one judge, and each having a clerk of the court and a courthouse. Each district has a chief general district court judge and a chief juvenile and domestic relations district court judge elected by peer vote for a two-year term.

The Committee on District Courts (CDC) recommends new judgeships, certifies the need to fill district court vacancies, authorizes the number of clerks, magistrates and personnel in each district, establishes guidelines and policies for court system personnel, and fixes salary classification schedules for district court personnel and magistrates. It is composed of the Majority Leader of the Senate, the Speaker of the House, the Chairmen of the Committees for Courts of Justice in the Senate and House of Delegates, two members of each of the Courts of Justice Committees appointed by the respective Chairman, one circuit court judge, two general district court judges, and two juvenile and domestic relations district court judges.

The Judicial Conference of Virginia and the Judicial Conference of Virginia for District Courts discuss and consider means and methods of improving the administration of justice in Virginia. The Judicial Council of Virginia is charged with the responsibility of making a continuous study of the organization, rules, and methods of procedure and practice of the judiciary. The council is composed of the Chief Justice as president, one Court of Appeals judge, six circuit court judges, one general district court judge, one juvenile and domestic relations district court judge, two attorneys qualified to practice in the Supreme Court of Virginia, and the Chairmen of the Committees for Courts of Justice in the Virginia Senate and House of Delegates.

The Office of the Executive Secretary (OES) of the Supreme Court provides administrative support for the courts and magistrate offices.

The eleven Court of Appeals judges are elected by a majority vote of each house of the General Assembly for eight-year terms with interim appointments made by the Governor.

The judges of the Circuit Courts are elected by a majority vote of each house of the General Assembly for eight-year terms with interim appointments made by the Governor.

The Judicial Inquiry and Review Commission investigates allegations of judicial misconduct or the serious mental or physical disability of a judge. The commission has jurisdiction to investigate the justices of the Supreme Court and all judges of the Commonwealth, as well as members of the State Corporation Commission, the Virginia Workers' Compensation Commission, special justices, substitute judges, and retired judges who have been recalled to service. The Commission may file a formal complaint with the Supreme Court against judges for violations of any canon of judicial ethics, misconduct in office, or failure to perform their judicial duties. The commission has seven members, elected by the General Assembly for four-year terms. Membership includes one circuit court judge, one general district court judge, one juvenile and domestic relations district court judge, two lawyers, and two members of the public who are not lawyers. Commission staff receive and investigate allegations of misconduct and present the findings to the commission.

The common law of Virginia permits private attorneys to participate with the government in the prosecution of criminal cases. [2]