The Judiciary of California is defined under the California Constitution, law, and regulations as part of the Government of California. The judiciary has a hierarchical structure with the Supreme Court at the apex, California courts of appeal as the primary appellate courts, and the California superior courts as the primary trial courts. Its administration is effected by the Judicial Council and its staff, as well as the relatively autonomous courts. California uses a modified Missouri Plan (merit plan) method of appointing judges, whereby judges are nominally elected at the superior court level (but in practice are first appointed by the governor) and appointed at higher levels, and are subject to retention elections.

The judicial system of California is the largest in the United States that is fully staffed by professional law-trained judges. [1] As of 2012, the state judiciary has more than 2,000 judicial officers that hear over 10 million cases each year (with the assistance of 21,000 staff members). [1] In comparison, the federal judicial system has only about 840 judges. Although New York and Texas each technically have more judicial officers than California, a large number of them are not attorneys and have no formal legal training. 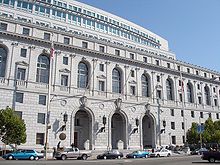 The judiciary has a hierarchical structure with the Supreme Court at the apex, courts of appeal as the primary appellate courts, and the superior courts as the primary trial courts. [2]

The Court has original jurisdiction in a variety of cases, including habeas corpus proceedings, and has the authority to review all the decisions of the California courts of appeal, as well as an automatic appeal for cases where the death penalty has been issued by the trial court. [3]

The Court deals with about 8,800 cases per year, although review is discretionary in most cases, and it dismisses the vast majority of petitions without comment. [4] It hears arguments and drafts full opinions for about 100 to 120 cases each year, of which about 20 are automatic death penalty appeals.[ citation needed]

The Supreme Court is headquartered in San Francisco, with branch offices in Los Angeles and Sacramento. [5] It hears oral arguments each year in all three locations.

Unlike the state supreme court, the courts of appeal have mandatory review jurisdiction under the informal legal tradition in common law countries that all litigants are entitled to at least one appeal. In practice, this works out to about 16,000 appeals per year, resulting in 12,000 opinions (not all appeals are pursued properly or are meritorious enough to justify an opinion).

Under the common law, judicial opinions themselves have legal effect through the rule of stare decisis. But because of their crushing caseloads (about 200 matters per justice per year), the courts of appeal are permitted to take the shortcut of selecting only the best opinions for publication. This way, they can draft opinions fast and quickly dispose of the vast majority of cases, without worrying that they are accidentally making bad law. About 7% of their opinions are ultimately selected for publication and become part of California law.

In California, the power of the intermediate courts of appeal over the superior courts is quite different from the power of the courts of appeals of the federal government over the federal district courts. The first Court of Appeal to rule on a new legal issue will bind all lower superior courts statewide. However, litigants in other appellate districts may still appeal a superior court's adverse ruling to their own Court of Appeal, which has the power to fashion a different rule. When such a conflict arises, all superior courts have the discretion to choose which rule they like until the California Supreme Court grants review and creates a single rule that binds all courts statewide. However, where a superior court lies within one of the appellate districts actually involved in such a conflict, it will usually follow the rule of its own Court of Appeal.[ citation needed]

The superior courts have appellate divisions (superior court judges sitting as appellate judges) which hear appeals from decisions of other superior court judges (or commissioners, or judges pro tem) who heard and decided relatively minor cases that previously would have been heard in inferior courts, such as infractions, misdemeanors, and "limited civil" actions (actions where the amount in controversy is below $25,000).

Court business is conducted using the California Court Case Management System [13] and other local court implementations. Pursuant to common law tradition, the courts of California have developed a large body of case law through the decisions of the Supreme Court and the courts of appeal, which are published by the California Reporter of Decisions in the California Reports and California Appellate Reports, respectively. The appellate divisions of the superior courts occasionally certify opinions for publication, which appear in the California Appellate Reports Supplement. There is also a separate reporter called the California Unreported Cases published independently starting in 1913 containing minor opinions that should have been published but simply were not, when the state supreme court was extremely overloaded with cases during its first half-century (resulting in the creation of the courts of appeal in 1904).

California uses a modified Missouri Plan (merit plan) method of appointing judges. [14] Judges are elected by the people, [15] but most of California's roughly 1,600 superior court judges are first appointed by the governor of California. [16] A person is eligible to be a judge only if the person has been a member of the California State Bar or served as a judge of a court of record in this State for 10 years immediately preceding selection. [17]

Supreme Court and Appeals Court judges appointed by the governor to fill a vacancy must be confirmed by the California Commission on Judicial Appointments, although counties may choose to use this system for superior court judges. [15] The California Commission on Judicial Nominees Evaluation (JNE) of the State Bar of California investigates the governor's candidates for judicial appointment. [18] [19] The California Commission on Judicial Appointments consists of the Chief Justice, Attorney General, and Senior Presiding Justice of the Court of Appeal of the affected district or of the entire state. [20] Superior court judges are either appointed by the governor to fill a vacancy after being reviewed by the JNE or elected by the county residents in nonpartisan elections. Judges of superior courts are elected within their counties for six years, judges of courts of appeal are elected within their districts for twelve years, and judges of the Supreme Court are elected at large for twelve years. [15] Judges are always subject to reelection and retention elections. [16] [21] Perhaps the most well known instance of a judge not being retained was Supreme Court Chief Justice Rose Bird and Associate Justices Cruz Reynoso and Joseph Grodin in the 1986 California general election.

There are a total of about 1,500 superior court judges, assisted by 380 commissioners and 35 referees.[ citation needed]

The Constitution guarantees the right to a jury trial as an inviolate right. [23] Jury service is an obligation of citizenship. [24]

Jurors are selected at random from the population of the area served by a court, [24] from a source or sources inclusive of a representative cross section of the population. [25] Sources may include the list of registered voters, California Department of Motor Vehicles' list of licensed drivers and identification cardholders resident within the area served by the court, customer mailing lists, telephone directories, utility company lists, and other lists. [25]

The California Constitution provides that the state's judicial power is vested in the courts, but it also permits some delegation of judicial authority. [27] [28] This authority to delegate subordinate judicial duties is distinct from the courts' authority to appoint temporary judges, which requires a stipulation by the parties. [28] Three types of SJOs have statutory authority in criminal cases: court commissioners, traffic trial commissioners, and traffic referees. [29] [30] There are small differences in the authority of these SJO types, but in almost all instances one type can be cross-assigned to exercise the authority of another type. [30] They are elected by the judges of the Court and given the power to hear and make decisions in certain kinds of legal matters, similar to the United States magistrate judge.

The State Bar of California is California's official bar association. It is responsible for managing the admission of lawyers to the practice of law, investigating complaints of professional misconduct, and prescribing appropriate discipline. It is directly responsible to the Supreme Court of California. All attorney admissions and disbarments are issued as recommendations of the State Bar, which are then routinely ratified by the Supreme Court. [34] [35] [36] California's bar is the largest in the U.S. with 200,000 members, of whom 150,000 are actively practicing.

The functions of the bailiff are usually carried out by the county sheriff under contract, but Shasta County, Trinity County and San Benito County still maintain a separate marshal.

Fresno County public defenders have protested excessive case loads, carrying about 1,000 felony cases a year giving them an average of only about two hours and five minutes per case. [39]

California formerly had " justice of the peace" courts staffed by lay judges, but gradually phased them out after a landmark 1974 decision in which the Supreme Court of California unanimously held that it was a violation of due process to allow a non-lawyer to preside over a criminal trial which could result in incarceration of the defendant. [40]

Before 1998, each county also had municipal or justice courts that heard some of the cases. In June, 1998, California passed Proposition 220, which allowed the judges in each county to determine if the county should have only one trial court. By 2001, all 58 counties had consolidated their courts into a single superior court.

The California courts of appeal were added to the judicial branch by a constitutional amendment in 1904.