Job for a Cowboy

Job for a Cowboy is an American death metal band from Glendale, Arizona. Formed in 2003, the band's debut album Genesis was released in 2007, peaking at No. 54 on the US Billboard 200 and selling 13,000 copies in its first week of release. The second album, 2009's Ruination, sold 10,600 copies in the United States in its first week to debut at position No. 42 on the Billboard 200 chart. The band comprises vocalist Jonny Davy, guitarists Tony Sannicandro and Al Glassman and bassist Nick Schendzielos. Davy is the only remaining founding member.

Job for a Cowboy was founded in Glendale, Arizona, during December 2003 [1] by vocalist Jonny Davy, guitarists Ravi Bhadriraju and Andrew Arcurio, bassist Chad Staples, and drummer Andy Rysdam when the band members were no older than 15 and 16. [2] In 2004, they created a MySpace profile, posted songs online, and immediately began to connect with several worldwide fans. [3] Later that year, Staples and Rysdam left Job for a Cowboy and were replaced by Brent Riggs and Elliott Sellers, respectively, as bassist and drummer. [2] Traffic to the band's MySpace profile increased exponentially in late 2005 when the band released their first EP, Doom. [3] The EP attracted the attention of Arizona independent label King of the Monsters, who distributed the disc after an initial self-released pressing by the band. [2] The EP release helped the band win the award for Best Metal Band at the Third Annual Arizona Ska Punk Awards Ceremony in Phoenix, Arizona. [4]

Job for a Cowboy extensively promoted their EP, including three performances on the Sounds of the Underground tour. [3] By the end of the year, the band obtained professional management and signed a deal with Metal Blade Records, [3] who reissued Doom with a bonus track. [2] During the same year, 2006, Arcurio left the band and Bobby Thompson joined the group. [2] While Job for a Cowboy was writing material for their first full-length album, Sellers announced that he was leaving the band to go back to school immediately after recording the album. [3] In search of a permanent drummer, the band then posted a bulletin on Blabbermouth.net, [5] which was seen by Jon "The Charn" Rice. He made a video of himself, posted it on YouTube, and sent the link to the band. [3] Soon after, Rice joined the band. [6] 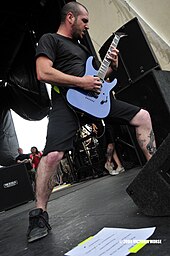 Guitarist Al Glassman, who was originally the guitarist for Despised Icon, joined Job for a Cowboy in late 2008.

In March 2007, Job for a Cowboy completed their debut full-length album, Genesis. [7] It was recorded at Blue Light Audio Media in Phoenix, Arizona, with producer Cory Spotts. It was mixed by Sabbat guitarist Andy Sneap. Released on May 15, the album peaked at No. 54 on the Billboard 200 and sold nearly 13,000 copies in its first week, which made Genesis the highest-charting heavy metal debut since Slipknot's 1999 debut album. [3] The album received generally positive reviews, with Kerrang! magazine saying, "an album that quite literally obliterates everyone else currently residing within the death and grind scenes" and "one of the year's most essential metal purchases." [8]

In June 2007, the band performed at the Download Festival in Donington Park, England. [9] The group also played at the Sounds of the Underground festival along with Amon Amarth, Chimaira, Gwar, and Shadows Fall. [9] In October, Job for a Cowboy co-headlined the 2007 Radio Rebellion Tour, teaming up with Behemoth, Gojira, and Beneath the Massacre. [10] The band featured on the 2008 Gigantour with headliners Megadeth, Children of Bodom, In Flames, and High on Fire. [11] In addition, they confirmed for a number of festivals during 2008, including Wacken Open Air in Germany [12] and a second appearance at England's Download Festival. [13] Job for a Cowboy embarked on a U.S. headlining tour in November and December 2008 with supporting acts Hate Eternal and All Shall Perish. [14] In 2008, Job for a Cowboy once again won the award for Best Metal Band at The Arizona Ska Punk Awards, and took home the award again the next year at the 2009 Awards Ceremony. [4]

In late 2008, guitarist Ravi Bhadriraju left Job for a Cowboy to return to school because he wanted to pursue a more rewarding career in the medical field. He was replaced with former Despised Icon guitarist Al Glassman. [15]

On May 1, 2009, the band announced that they had completed recording their second studio album, Ruination, at AudioHammer studios in Sanford, Florida, with producer Jason Suecof. [16] The album marks the debut of guitarist Al Glassman and drummer Jon "the Charn" Rice, who had actually been with the band since the tour for Genesis. [16] Ruination was then released on July 7, 2009, worldwide through Metal Blade Records. [17] The album sold around 10,600 copies in the United States in its first week of release to debut at position No. 42 on the Billboard 200 chart. [18] Job for a Cowboy participated in the second Mayhem Festival, playing on the Hot Topic stage along with bands such as Cannibal Corpse and Whitechapel.

At the beginning of 2011, the band started work on an EP [19] which was recorded in February at the Audiohammer Studios in Sanford, Florida, with producer Jason Suecof. [20] Just before the recording process began, bassist Brent Riggs and guitarist Bobby Thompson departed from the band and were replaced by Nick Schendzielos of Cephalic Carnage and Tony Sannicandro, respectively. On April 13, 2011, a video appeared on the internet of drummer Jon Rice performing a new song in the studio. [21] Job for a Cowboy issued their new EP on June 7, 2011, entitled Gloom, which was only made available for purchase through mail order and digital download. [22]

Job for a Cowboy entered Audio Hammer Studios in September 2011 to record their next effort. The group worked with the production team of Jason Suecof, Eyal Levi of Dååth, and Ronn Miller on the project. [23] 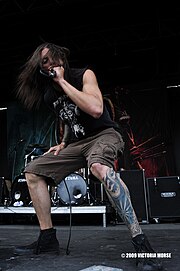 Vocalist Jonny Davy (pictured) is the only remaining original member of the band.

On February 21, 2012, Job for a Cowboy released their first single from their new album Demonocracy, titled "Nourishment Through Bloodshed." It was released via Metal Blade Records' YouTube channel. [24]

On March 20, Job for a Cowboy premiered the song "Black Discharge," [25] and, on April 2, the song "Imperium Wolves." [26] Demonocracy was released on April 10, 2012, and had first-week sales reaching 4,900, which charted at 87 on the Billboard 200. [27] That summer they were a part of the Summer Slaughter tour with acts such as Cannibal Corpse, Between the Buried and Me, and The Faceless.

On October 21, 2013, the band announced they were recording their fourth full-length album. The band's drummer, Jon "The Charn" Rice, announced eight days after the album announcement that he was departing the band. [28] It was announced on February 5, 2014, that he had joined hard rock band Scorpion Child.

On September 23, 2014, the band announced their upcoming album Sun Eater, which released on November 11 via Metal Blade. The band also released their first single from the album titled "Sun of Nihility." [29] The second single released off of Sun Eater was the song "Eating the Visions of God."

On January 22, 2016, it was announced that drummer Jon "The Charn" Rice had rejoined the band for a one-off show. Whether he has rejoined on a permanent basis has not been confirmed. [30]

During a 2016 Interview at NAMM Show, bassist Nick Schendzielos revealed that the band was writing new music and had four new songs at the time. He went on to say that they hope to release new music in late 2017 that would follow the musical direction of Sun Eater. [31]

In August 2019, it was published that Job for a Cowboy may be "plotting a legit comeback with new music (an EP) and possibly some shows" according to "sources close to the band." [32] In May 2020, the band alluded to a reunion on Twitter with a clip from the 1995 film Mortal Kombat. [33] [34] On May 28, 2020, Jason Suecof, who has produced, mixed and engineered on three of the band’s LPs and one EP, posted on social media “Jonny Davy just sang me the whole new album”. [35] In June 2020, Suecof confirmed that the band will be recording new music, although production had been interrupted by the coronavirus pandemic. [33] In September 2020, the band revealed that Navene Koperweis would be the session drummer on the band's upcoming album. [36]

Job for a Cowboy originally started as a deathcore group, but they changed their style to death metal with the release of their first full-length album Genesis. [37] [38] The band has also been described as technical death metal. [39] [40] Job for a Cowboy has been described by The New York Times as "an Arizona band with a guttural, brute-force sound descended (indirectly) from hardcore punk" [41] and "straightforwardly brutal act" by Rolling Stone magazine. [42]

On the band's fourth full-length Sun Eater, Job for a Cowboy started experimenting with a more progressive writing structure and style. The album, which was called "progressive death metal", was praised for its stylistic innovation in contrast to the band's previous albums. [43]