Jeffrey Marshall Foxworthy (born September 6, 1958) is an American stand-up comedian, actor, writer, producer, television personality, radio personality and author. He is a member of the Blue Collar Comedy Tour, a comedy troupe which also comprises Larry the Cable Guy, Bill Engvall, and Ron White. Known for his "You might be a redneck" one-liners, Foxworthy has released six major-label comedy albums. His first two albums were each certified 3× Platinum by the Recording Industry Association of America. Foxworthy has written several books based on his redneck jokes, as well as an autobiography entitled No Shirt, No Shoes... No Problem! [1]

Foxworthy has also made several ventures into television, starting in the mid-1990s with his own sitcom called The Jeff Foxworthy Show. He has also appeared alongside Engvall and Larry the Cable Guy in several Blue Collar television specials, most notably Blue Collar TV. Since 2007, he has been the host of the quiz show Are You Smarter Than a 5th Grader? on Fox (2007–09 and 2015) and in syndication (2009–11). Foxworthy hosted a nationally syndicated radio show called The Foxworthy Countdown from April 1999 to December 2009. For three seasons, he hosted GSN's The American Bible Challenge.

Foxworthy was born in Atlanta, Georgia, on September 6, 1958, the first child of Carole Linda (née Camp) and IBM executive Jimmy Abstance Foxworthy. His parents were both of English descent, [1] [2] [3] with his roots lying in the county of Essex. [1] His grandfather, James Marvin Camp, was a Hapeville firefighter for over three decades. [1]

According to Foxworthy, who grew up in the Southern Baptist tradition, he remembers accepting Jesus Christ when he was seven years old. When he told his mother that he wanted to go down to the local sanctuary to accept Christ as his Lord and Savior, his mother, who felt he was too young, told him to wait until he had a firmer understanding of the undertaking. Foxworthy argued with her until a preacher came to their home and vouched for Foxworthy, who went back to the church that night with his mother. Despite this, Foxworthy says that complying with the often-strict rules of the church were difficult for him, saying, "I love God, but I can't act and dress like that.”

Foxworthy graduated from Hapeville High School. He attended Georgia Institute of Technology in Atlanta, but left just before graduating. [4] He worked for five years in mainframe computer maintenance at IBM, where his father also worked. At the urging of IBM co-workers, Foxworthy entered and won the Great Southeastern Laugh-off at Atlanta's Punchline comedy club in 1984.

Totally Committed was released in May 1998. In conjunction with the album was a one-hour HBO stand-up special by the same name. The album reached "gold" status and received a 1999 Grammy Award nomination. [7] The video for the Totally Committed song featured frequent references to then- Atlanta Braves pitcher, Greg Maddux as well as an appearance at the very end by Maddux himself (along with teammate John Smoltz).

In 2001, Foxworthy received a nomination for Best Spoken Comedy Album at the 43rd Annual Grammys. [8]

In 1995, Foxworthy starred in The Jeff Foxworthy Show, a sitcom created out of his stand-up comedy persona. It aired on ABC, but was canceled after one season. NBC subsequently picked up the show, but it was again canceled after one season. Later, he remarked that the network did not understand how to properly market his humor; thinking his routine was "too Southern" for a national network ("Has anyone heard me talk?", he commented in one of his stand-up routines), they based the first season of his sitcom in Bloomington, Indiana. Later, the series aired on Nick at Nite and CMT in 2005 and 2006. He also appeared in Alan Jackson's video for " I Don't Even Know Your Name" in 1995.

In 1998, Foxworthy appeared on the mock talk show Space Ghost Coast to Coast, where he attempts to explain his famous “You might be a Redneck” joke to Space Ghost, yet fails entirely. Throughout the episode, Space Ghost, Zorak and Moltar are taking the Ghost Planet to the US, with plans to make it the 51st state. By the end of the episode Foxworthy is sent to “The Box”.

He hosted Are You Smarter than A 5th Grader? on Fox in prime time. He hosted the syndicated version of the series from September 21, 2009 until its cancellation on March 24, 2011. [10] It was announced that Foxworthy would return as host of Are You Smarter than a 5th Grader? [11] In addition, he is a host on The Bucks of Tecomate which airs on the NBC Sports Network with Alabama native David Morris.[ citation needed]

In 2011, Foxworthy appeared as a guest “Shark” for two episodes of ABC’s second season of Shark Tank. [13]

Since August 2012, Foxworthy has been the host and a producer of the GSN biblical-themed game show The American Bible Challenge, which has aired two seasons. [14] He is also the host of the food reality competition series The American Baking Competition, which aired its first season in summer 2013. [15]

Foxworthy has appeared as host and featured guest on several programs on the Outdoor Channel and Versus. [16] [17]

In February 2019, Foxworthy was announced as a judge for NBC's comedy competition series Bring the Funny. [18]

In 2020, a new episode of Ellen's Game of Games featured Jeff Foxworthy on a game of Stink Tank. 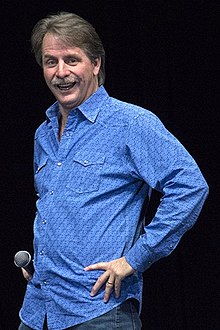 In the early 2000s, Foxworthy had a career resurgence as a result of the Blue Collar Comedy Tour, in which he and three other comedians ( Larry the Cable Guy, Ron White, and Bill Engvall), specializing in common-man comedy, toured the country and performed for record crowds. The tour lasted three full years, constantly being extended after an initial run of 20 shows.

In 2004, he launched a new television series called Blue Collar TV on The WB Television Network, Comedy Central, and Comedy Network (2007). He served as executive producer and starred alongside Blue Collar Comedy Tour-mates Larry the Cable Guy and Bill Engvall. (Ron White made occasional guest appearances.) On Larry the Cable Guy's website, he posted that the show was canceled on October 17, 2005, by WB. Reruns of Blue Collar TV continued until the network merged with UPN to form The CW. In 2006, Foxworthy resurrected the Blue Collar TV format on Country Music Television (CMT) with Foxworthy's Big Night Out. The show began airing in the summer and was canceled after one season.

Foxworthy has authored several books, including You Might Be a Redneck If... (1989), as well as his autobiography, No Shirt, No Shoes, No Problem! (1996). Artist Layron DeJarnette provided illustrations for the Redneck Dictionary books. R. David Boyd has been the exclusive illustrator for most of Foxworthy's books and album covers.

He also has released a cookbook entitled The Redneck Grill, co-authored with Newnan, Georgia, artist R. David Boyd, and "Redneck Extreme Mobile Home Makeover" (2005), a book with some of his redneck jokes.

In February 2008, Foxworthy released his first children's book Dirt On My Shirt. This was followed by Silly Street in 2009 and Hide!!! in 2010, both of which were illustrated by Steve Bjorkman.

In May 2008, Foxworthy released How to Really Stink at Golf, with co-author Brian Hartt and illustrations by Layron DeJarnette. In May 2009, he released How to Really Stink at Work, A Guide to Making Yourself Fire-Proof While Having the Most Fun Possible. This book was also co-authored with Hartt and illustrations by DeJarnette.

In April 1999, Foxworthy began The Foxworthy Countdown, a nationally syndicated, weekly radio show, which featured the top 30 country hits of the week, as reported by Mediabase. In 2001, he received a Country Music Association nomination for "Broadcast Personality of the Year." The program's last broadcast, the 2009 year-end countdown, aired the weekend of December 27, 2009. [19] In 2006, Sirius Satellite Radio launched the Blue Collar Comedy channel, which featured stand-up comedy centered around the Blue Collar group. In 2015, now under the SiriusXM banner, the station rebranded as Jeff & Larry's Comedy Roundup, which featured similar programming to the previous channel with an enhanced focus on Foxworthy and Larry the Cable Guy. [20]

In August 2011, Foxworthy launched Foxworthy Outdoors, a website carrying an assortment of Foxworthy-brand hunting and outdoors products. On the site, he also hosts a web series called Jeff Foxworthy: Inside & Out, featuring some of his friends as they document hunting trips, fishing outings, and land conservation on his Georgia farm. [21] [22] 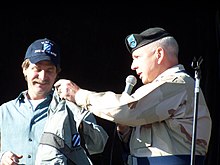 Foxworthy met his wife Pamela Gregg at the Punchline in Atlanta, Georgia, and they married on September 18, 1985. [23] They have two daughters, Jordan and Julianne. [24] [25] [26] He is a noted hunting enthusiast, beginning when he was a teen hunting on his father's farm property in central Georgia.[ citation needed]

Foxworthy emphasizes the Bible as a guide for his everyday life, including what to do with his income, which he explains is not his, but "belongs to God".[ citation needed] In a 2012 interview, Foxworthy revealed that "rather than going and sitting in a service for an hour every Sunday and that being extent of my faith, it's more important that I live it out. I lead a Bible study with homeless guys on Tuesday mornings ... I have done it for years." [27] The group started with 15 participants and subsequently grew to over 100 homeless men. According to Foxworthy, if addicts among the group successfully complete treatment, the organization will house them for a year and offer counseling and support in reuniting them with their estranged families. [27]

Foxworthy has released five comedy albums for Warner Bros. Records, as well as one for DreamWorks Records. One of his albums included the novelty Christmas song " Redneck 12 Days of Christmas", which reached No. 18 on the Hot Country Songs charts in late 1995 to early 1996.