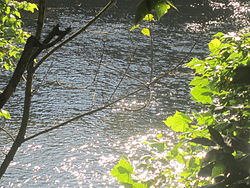 The James, hidden by trees, at Percival's Island Riverwalk in Lynchburg, Virginia

The James River is a river in the U.S. state of Virginia that begins in the Appalachian Mountains and flows 348 miles (560 km) [3] to Chesapeake Bay. The river length extends to 444 miles (715 km) if one includes the Jackson River, the longer of its two source tributaries. [3] It is the longest river in Virginia. Jamestown and Williamsburg, Virginia’s first colonial capitals, and Richmond, Virginia's current capital, lie on the James River.

The Native Americans who populated the area east of the Fall Line in the late 16th and early 17th centuries called the James River the Powhatan River, named for the chief of the Powhatan Confederacy which extended over most of the Tidewater region of Virginia. The English colonists named it "James" after King James I of England, [4] as they also constructed the first permanent English settlement in the Americas in 1607 at Jamestown along the banks of the James River about 35 miles (56 km) upstream from the Chesapeake Bay.

The navigable portion of the river was the major highway of the Colony of Virginia during its first 15 years, facilitating supply ships delivering supplies and more people from England. However, for the first five years, despite many hopes of gold and riches, these ships sent little of monetary value back to the sponsors. In 1612, businessman John Rolfe successfully cultivated a non-native strain of tobacco which proved popular in England. Soon, the river became the primary means of exporting the large hogsheads of this cash crop from an ever-growing number of plantations with wharfs along its banks. This development made the proprietary efforts of the Virginia Company of London successful financially, spurring even more development, investments and immigration. Below the falls at Richmond, many James River plantations had their own wharfs, and additional ports and/or early railheads were located at Warwick, Bermuda Hundred, City Point, Claremont, Scotland, and Smithfield, and, during the 17th century, the capital of the Colony at Jamestown.

Navigation of the James River played an important role in early Virginia commerce and the settlement of the interior, although growth of the colony was primarily in the Tidewater region during the first 75 years. The upper reaches of the river above the head of navigation at the fall line were explored by fur trading parties sent by Abraham Wood during the late 17th century.

Although ocean-going ships were unable to navigate beyond present-day Richmond, portage of products and navigation with smaller craft to transport crops other than tobacco was feasible. Produce from the Piedmont and Great Valley regions traveled down the river to seaports at Richmond and Manchester through such port towns as Lynchburg, Scottsville, Columbia and Buchanan.

As the James River passed through the Confederate capital Richmond, it was the scene of much action in the Civil War, notably in the Peninsula Campaign, the Seven Days Battles and the Siege of Petersburg.

The James River was considered a route for transport of produce from the Ohio Valley. The James River and Kanawha Canal was built for this purpose, to provide a navigable portion of the Kanawha River, a tributary of the Ohio River. For the most mountainous section between the two points, the James River and Kanawha Turnpike was built to provide a portage link for wagons and stagecoaches. However, before the canal could be fully completed, in the mid-19th century, railroads emerged as a more practical technology and eclipsed canals for economical transportation. The Chesapeake and Ohio Railway (C&O) was completed between Richmond and the Ohio River at the new city of Huntington, West Virginia by 1873, dooming the canal's economic prospects. In the 1880s, the Richmond and Alleghany Railroad was laid along the eastern portion of the canal's towpath, and became part of the C&O within 10 years. In modern times, this rail line is used primarily in transporting West Virginia coal to export coal piers at Newport News.

During the 1960s and 70s, mishandling and dumping of the insecticide Kepone resulted in the contamination of large stretches or the James River Estuary downstream of the Allied Signal Company and LifeSciences Product Company plants in Hopewell, Virginia. Due to the pollution risks, many businesses and restaurants along the river suffered economic losses. In 1975 Governor Mills Godwin Jr. shut down the James River to fishing for 100 miles, from Richmond to the Chesapeake Bay. This ban remained in effect for 13 years, until efforts to clean up the river began to show results. A decade of accumulated silt, lying above the contaminated riverbed, helped to reduce levels of the chemical. [5]

The James River drains a catchment comprising 10,432 square miles (27,020 km2). The watershed includes about 4% open water and an area with a population of 2.5 million people (2000). The James River forms near Iron Gate on the border between Alleghany and Botetourt counties, from the confluence of the Cowpasture and Jackson rivers in the Appalachian Mountains. It flows into the Chesapeake Bay at Hampton Roads. Tidal waters extend west to Richmond, the capital of Virginia, at the river's fall line (the head of navigation). Larger tributaries draining to the tidal portion include the Appomattox River, Chickahominy River, Warwick River, Pagan River, and the Nansemond River.

At its mouth near Newport News Point, the Elizabeth River and the Nansemond River join the James River to form the harbor area known as Hampton Roads. Between the tip of the Virginia Peninsula near Old Point Comfort and the Willoughby Spit area of Norfolk in South Hampton Roads, a channel leads from Hampton Roads into the southern portion of the Chesapeake Bay and out to the Atlantic Ocean a few miles further east. Many boats pass through this river to import and export Virginia products.

The James River contains many parks and other recreational attractions. Canoeing, fishing, kayaking, hiking, and swimming are some of the activities that people enjoy along the river during the summer. From the river's start in the Blue Ridge mountains to Richmond, numerous rapids and pools offer fishing and whitewater rafting. The most intense whitewater stretch is a 2-mile (3 km) segment that ends in downtown Richmond where the river goes over the fall line. This is the only place in the country where extensive class III (class IV with above average river levels) whitewater conditions exist within sight of skyscrapers. Below the fall line east of Richmond, the river is better suited for water skiing and other large boat recreation. Here the river is known for its blue catfish, reaching average sizes of 20 to 30 pounds (9.1 to 13.6 kg), with frequent catches exceeding 50 pounds (23 kg). In the Chesapeake watershed, the James River is the last confirmed holdout for the nearly extirpated Atlantic sturgeon. In May 2007 a survey identified 175 sturgeon remaining in the entire river, with 15 specimens exceeding 5 feet (1.5 m). [6]

Due to its potential for generating mechanical power for rotating machinery such as grist mills, hydroelectric power, and as a water route for trade, many dams have been built across the James River since the time of European settlement of the region. While most of these dams have been removed or failed, several dams still exist along the upper course of the river. From the head of the river downstream to Richmond are found the following dams as identified by the current US Army Corps of Engineers National Inventory of Dams: [7]

While not identified in the National Inventory of Dams, a very low head weir structure is found below Bosher Dam in Richmond on either side of Williams Island. Known as the "Z-Dam" for its zigzag course on the south side of the island, the current structure was built in 1932 and serves to direct water into Richmond's water treatment facility on the north bank. The less than 5 feet tall dam does not serve any power or navigation purpose. [8] [9]

ACL Railroad crossing at the falls in Richmond.

In the Hampton Roads area, the river is as much as 5 miles (8.0 km) wide at points. Due to ocean-going shipping upriver as far as the Port of Richmond, a combination of ferryboats, high bridges and bridge-tunnels are used for highway traffic. Crossings east to west include:

The SR 895 high-level crossing is the last bridge east of the Deepwater Port of Richmond and head of ocean-going navigation at the fall line of the James River. West of this point, potential flooding is more of an engineering concern than clearance for watercraft.

The following is a list of extant highway bridges across the James River with one or both ends within the City of Richmond.

The following is a partial, incomplete list of extant highway bridges across the James River west of Richmond.

The Monitor-Merrimac Memorial Bridge-Tunnel prohibits bicycles, but bicyclists may take the Jamestown Ferry. [10] After a fatal accident on the Boulevard Bridge[ citation needed], the City of Richmond requires bicycles to travel on the sidewalk for the length of the bridge. 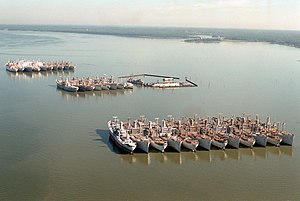 Part of the James River Fleet

The fleet is managed by the U.S. Department of Transportation's Maritime Administration (MARAD). It is a different entity from the United States Navy reserve fleets, which consist largely of warships.

A song was recorded by country and Western music singer Lefty Frizzell about the river, called "James River," released on the Saginaw, Michigan album.

A song recorded by Waylon Jennings titled "The Ghost of General Lee" mentions "the James River water [running] a bloody red" following a battle between the Union and Confederate armies.

Avail, a music group from Richmond, recorded Over the James, a 1998 hardcore punk LP record released by Lookout Records (and re-released in 2006 by Jade Tree Records [12]) named in honor of the river, containing the song "Scuffle Town" whose lyrics also reference the river.

The river is referenced in the Wrinkle Neck Mules song "Banks of the James."

Prior to settling on the title Black Messiah, American soul singer D'Angelo was set on titling his third studio album James River.

In her song " When the Master Calls the Roll," from her 2014 album "The River & the Thread," American singer/songwriter Roseanne Cash refers to a planned wedding, sometime around the start of the Civil War, "down by the King James River" in Virginia.

Cracker's "James River" is on their 1998 album Gentlemen's Blues.