James Edward Oglethorpe (22 December 1696 [1] – 30 June 1785) was a British soldier, Member of Parliament, and philanthropist, as well as the founder of the colony of Georgia. As a social reformer, he hoped to resettle Britain's worthy poor in the New World, initially focusing on those in debtors' prisons. [2]

James Oglethorpe was born in Surrey, the son of Sir Theophilus Oglethorpe (1650–1702) of Westbrook Place, Godalming, and his wife Eleanor Lady Oglethorpe (1662–1732). He entered Corpus Christi College, Oxford, in 1714, but in the same year left to join the army of Prince Eugene of Savoy. Through the recommendation of John Churchill, 1st Duke of Marlborough he became aide-de-camp to the prince, and during the Austro-Turkish War of 1716–18 he served with distinction in the campaign against the Turks.

After his return to England, he was elected Member of Parliament for Haslemere in 1722. He became a leading humanitarian, and in 1728 he advocated reform of the terrible conditions experienced by sailors in the British Royal Navy by publishing an anonymous pamphlet, 'The Sailors Advocate.' [3] [4]

In 1728, three years before conceiving the Georgia colony, Oglethorpe chaired a Parliamentary committee on prison reform. The committee documented horrendous abuses in three debtors' prisons. As a result of the committee's actions, many debtors were released from prison with no means of support. Oglethorpe viewed this as part of the larger problem of urbanisation, which was depleting the countryside of productive people and depositing them in cities, particularly London, where they often became impoverished or resorted to criminal activity. To address this problem, Oglethorpe and a group of associates, many of whom served on the prison committee, petitioned in 1730 to form the Trustees for the Establishment of the Colony of Georgia in America. The petition was finally approved in 1732, and the first ship, led by Oglethorpe, departed for the New World in November. [5]

Oglethorpe and the Trustees formulated a contractual, multi-tiered plan for the settlement of Georgia (see the Oglethorpe Plan). The plan envisioned a system of "agrarian equality", designed to support and perpetuate an economy based on family farming, and prevent social disintegration associated with unregulated urbanisation. Land ownership was limited to fifty acres, a grant that included a town lot, a garden plot near town, and a forty-five-acre farm. Self-supporting colonists were able to obtain larger grants, but such grants were structured in fifty-acre increments tied to the number of indentured servants supported by the grantee. Servants would receive a land grant of their own upon completing their term of service. No one was permitted to acquire additional land through purchase or inheritance. [6]

With Oglethorpe on that ship were cotton seeds provided by the Chelsea Medicinal Garden in London. Originally established by the Apothecaries' Company in 1673 for the cultivation and study of medicinal plants (many hospitals are nearby, including the Royal Hospital), the Garden's mission soon expanded to collect and study plants, shrubs, and trees from all over the world. The cotton seeds given to Oglethorpe (and his colony's success in growing cotton) were instrumental in establishing the cotton industry in the U.S. South. [7] As discussed below, the plan for the colony was originally anti-slavery, emphasizing small family-owned farms. But economic pressures eventually led to the lifting of the ban on slavery, as described below—and slavery was indispensable to the rise of large cotton-growing plantations throughout the Deep South.

Oglethorpe and the Indians, frieze in the United States Capitol Rotunda. Photo courtesy of the Architect of the Capitol

Oglethorpe and the first colonists arrived at South Carolina on the ship Anne in late 1732, and settled near the present site of Savannah, Georgia on 1 February 1733. He negotiated with the Yamacraw tribe for land (Oglethorpe became great friends with Chief Tomochichi, who was the chief of the Creek Indian village of Yamacraw), and built a series of defensive forts, most notably Fort Frederica, of which substantial remains can still be visited. He then returned to England and arranged to have slavery banned in Georgia after being emotionally moved by an intercepted letter from Ayuba Suleiman Diallo, a slave in Maryland. [8] (For more on the story of Oglethorpe's involvement, see Ayuba Suleiman Diallo's Wikipedia page.) Oglethorpe and his fellow trustees were granted a royal charter for the Province of Georgia between the Savannah and Altamaha rivers on 9 June 1732. [9]

Georgia was a key contested area, lying in between the English Carolinas and Spanish Florida. It was Oglethorpe's idea that British debtors should be released from prison and sent to Georgia. Although it is often repeated that this would theoretically rid Britain of its so-called undesirable elements, in fact it was Britain's "worthy poor" whom Oglethorpe wanted in Georgia. Ultimately, few debtors ended up in Georgia. The colonists included many Scots whose pioneering skills greatly assisted the colony, and many of Georgia's new settlers consisted of poor English tradesmen and artisans and religious refugees from Switzerland, France and Germany, as well as a number of Jewish refugees. There were also 150 Salzburger Protestants who had been expelled by edict from the Archbishopric of Salzburg in present-day Austria (see Religious conflict in Salzburg), and established the settlement of Ebenezer near Savannah. The colony's charter provided for acceptance of all religions except Roman Catholicism. The ban on Roman Catholic settlers was based on the colony's proximity to the hostile settlements in Spanish Florida.[ citation needed]

On 21 February 1734, Oglethorpe established the first Masonic Lodge within the British Colony of Georgia. [10] Now known as Solomon's Lodge No. 1, F. & A. M. it is the "Oldest Continuously Operating English Constituted Lodge of Freemasons in the Western Hemisphere". For a period in 1736, Oglethorpe's secretary was Charles Wesley, later well known as a hymnwriter of Methodism. [11]

Owing to the colony's primary role as a military buffer between English and Spanish-held territories, the original model for the colonisation of Georgia excluded the use of slave labour, fearing that runaway slaves could internally weaken the colony and assist the enemy at St. Augustine, Florida. But, instead of slaves defecting southwards to the Spanish, runaways from the Carolinas found refuge in Georgia, thus irritating its northern neighbour. [12] The banning of slavery also reduced the work force, and this was felt to be a constraint on Georgia's early economic growth. Many settlers thus began to oppose Oglethorpe, regarding him as a misguided and "perpetual dictator". Many new settlers soon set their eyes on South Carolina as a less restrictive and, they hoped, a more profitable place to settle. In 1743, after Oglethorpe had left the colony, the ban on slavery was lifted. Various forces united including the English who always urged it and as a result large numbers of slaves were soon imported. [13]

In 1734 Oglethorpe visited Britain aboard HMS Aldborough, taking with him a delegation of Creek Indians, [14] who met George II and his family at Kensington Palace. Oglethorpe was widely acclaimed in London, although his expansionism was not welcomed in all quarters. The Duke of Newcastle, who directed British foreign policy, had tried to restrain James Oglethorpe's efforts in the colony for fear of offending the Spanish, whom Newcastle wished unsuccessfully to court as an ally. Newcastle eventually relented, and became a supporter of the colony admitting "it will now be pretty difficult to give up Georgia". [15] The colony's existence was one of several disputes which worsened Anglo-Spanish relations in the late 1730s. [16] 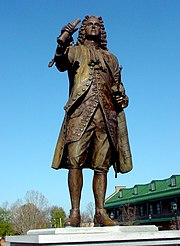 Statue of James Oglethorpe at the Augusta Common, an open space he personally designed when co-founding the city in 1735. [17]

In early 1740, during the War of Jenkins' Ear, fought between British Georgia and Spanish Florida as part of a larger conflict, the War of Austrian Succession, Oglethorpe was responsible for a number of successful raids on Spanish forts, [18] as well as the unsuccessful Siege of St. Augustine in 1740. Oglethorpe showed poor military leadership but he received little help from South Carolina or from his Indian allies, from the Ordnance Board, or from the Royal Navy, despite his best efforts to gain their support. [19]

Among Oglethorpe's most valuable Indian allies in this siege were the Creeks, influenced by Mary Musgrove. [20] Her Indian name was Coosaponakeesa (lovely fawn), and she was married to John Musgrove, a trader. Following the failed attempt to strike against Florida, Oglethorpe commanded British forces during the Spanish invasion of Georgia, defeating them at the Battle of Bloody Marsh [21] and forcing them to withdraw. [22]

After his exploits in Georgia, Oglethorpe returned to London in 1743 and rose steadily through the ranks of the British Army. He would never return to Georgia. [23] There is some evidence that he returned to Europe under a pseudonym, with the assistance of Field Marshal Keith.

On the death of his brother Theophilus Oglethorpe, Jr. in about 1737, he inherited the title of Baron Oglethorpe of Oglethorpe in the Jacobite Peerage. [24]

These were the days of the "Young Pretender" and incursions by the Jacobite troops from Scotland into the North of England. Oglethorpe had been busy forming a unit of Rangers which were to be shipped out to defend Georgia from future Spanish attacks. He immediately put his troops at the disposal of the government forces, under the command of the Duke of Cumberland, who were attempting to suppress the rebellion. Oglethorpe and his troops joined with Cumberland at Preston and attempted to harry the retreating Jacobite army as they tried to escape back to Scotland. He fought a skirmish at Shap Fell in Westmorland, but he was forced to break off the engagement by the intense weather and take shelter for the night. Overnight the Jacobites managed to withdraw and escape over the fell. Because of this Oglethorpe was court-martialled on the accusation of not pursuing the invaders more aggressively. He was acquitted, attained the rank of General, but never again given a command. [25]

Although a strong supporter of the British war effort in the Seven Years War, Oglethorpe took no active role in the conflict.

In 1785, Oglethorpe visited John Adams (the first US minister plenipotentiary to the Court of St. James's, i.e., the first US ambassador to Britain) shortly after the latter arrived in London. [26] The meeting included an expression by Oglethorpe of his sadness at the ill-will that had existed between the countries.

Oglethorpe died at Cranham in 1785, and was buried at the centre of All Saints' parish church, which immediately adjoins Cranham Hall (rebuilt c. 1790 but sketched prior by John Pridden in 1789). Elizabeth survived him a few years and was subsequently buried at his side. The site was lost until re-discovered by Thornwell Jacobs in 1922.

Oglethorpe County and Oglethorpe University in Atlanta, as well as the town of Oglethorpe, Georgia, are all named in his honour. [27] Also, The James Oglethorpe Primary School in Cranham is named after him.

All Saints' was rebuilt c.1871. However, the new church stands on the same foundations as the old one, and Oglethorpe's poetic marble memorial is on the south wall of the chancel, as before. In the 1930s, the president of Oglethorpe University Thornwell Jacobs excavated the Oglethorpe family vault in the centre of the chancel at All Saints', although permission to translate the General's relics to a purpose-built shrine at Oglethorpe University (Atlanta) had been refused by the Archdeacon.

There is a bronze statue in Chippewa Square, Savannah, Georgia, created by sculptor Daniel Chester French and unveiled in 1910. Oglethorpe faces south, toward Georgia's one-time enemy in Spanish Florida, and his sword is drawn.

Oglethorpian anniversaries have since led to the donation of the altar rail at All Saints' by a ladies charity in Georgia. In 1996, then Georgia Governor Zell Miller attended Oglethorpe tercentenary festivities in Godalming and at Corpus Christi College, Oxford. [28]