Born in Berkshire, England [2] [3] he is the eldest son of Victor Rothschild, 3rd Baron Rothschild by his first wife Barbara Judith Rothschild (née Hutchinson). His father was born into a Jewish family, while his mother converted to Orthodox Judaism when they married. [4] Rothschild was educated at Eton College and then at Christ Church, Oxford, where he gained a First in history, tutored by Hugh Trevor-Roper. [5]

From 1963 Rothschild worked at the family bank N M Rothschild & Sons in London, before resigning in 1980 due to a family dispute. The chairmanship of the bank had passed from his father, who had chosen to follow a scientific career and had lost control of the majority voting shares, to his cousin Sir Evelyn Robert de Rothschild, and Jacob felt that his aspirations would be thwarted. He sold his minority stake in the bank, but took independent control of Rothschild Investment Trust (now RIT Capital Partners plc), an investment trust listed on the London Stock Exchange. [5]

After resigning from the bank in 1980, Jacob Rothschild went on to found J. Rothschild Assurance Group (now St. James's Place plc) with Sir Mark Weinberg in 1991. [6] In 1989, he joined forces with Sir James Goldsmith and Kerry Packer, in an unsuccessful bid for British American Tobacco.

From November 2003 until his retirement in 2008, he was Deputy Chairman of BSkyB Television [9] and until 2008 he was a Director of RHJ International. [10] He has also been a Member of the Council for the Duchy of Cornwall for the Prince of Wales [11] and a member of the International Advisory Board of The Blackstone Group. [12]

He was appointed Knight Commander of the Royal Victorian Order (KCVO) in the 2020 New Year Honours for services to the Duchy of Cornwall. [13]

In 2003 Rothschild came under scrutiny when Russian oil industrialist Mikhail Khodorkovsky's shares in YUKOS passed to him under a deal they concluded prior to Khodorkovsky's arrest. [14] [15]

In November 2010, an undisclosed entity affiliated with Rothschild purchased a 5.0% equity interest in Genie Energy, a subsidiary of IDT Corporation, for $10.0 million. [16] In 2013, Genie Energy was granted exclusive oil and gas exploration rights to a 153-square mile area in the southern part of the Golan Heights. [17] 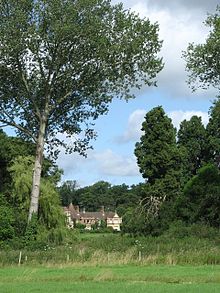 From his headquarters in St James's Place in London, Jacob Rothschild has cultivated clients, business associates and friends who have extended his interests beyond the normal scope of a banker. He maintains personal and business links with Henry Kissinger. [18]

His country estate has been a venue for visiting heads of state including Presidents Ronald Reagan and Bill Clinton. Margaret Thatcher received French President François Mitterrand there at a summit in 1990. He hosted the European Economic Round Table conference in 2002, attended by James Wolfensohn, former president of the World Bank, Nicky Oppenheimer, Warren Buffett and Arnold Schwarzenegger. [19]

In 1961, Rothschild married Serena Mary Dunn, a granddaughter of the Canadian financier Sir James Dunn, and they have four children. Lady Rothschild died in 2019.

He commissioned the 2015 RIBA Award winner Flint House [21] on the Waddesdon Manor estate in Buckinghamshire, UK. Rothschild donated the property to the Rothschild Foundation which manages the rest of the estate for the National Trust.

In the past, he has also been a Trustee of the State Hermitage Museum of St Petersburg (retired 2008); [22] a Trustee of the Qatar Museums Authority (retired 2010); [23] Chairman of the Pritzker Prize for Architecture (2002–2004); [24] Chairman of both the Gilbert Collection Trust and the Hermitage Development Trust, Somerset House; [22] a Trustee and Honorary Fellow of the Courtauld Institute, Somerset House; [25] and a Fellow, Benefactor, and member of the Visitors' Committees of the Ashmolean Museum Oxford (retired 2008). [26] In 2014, he received the J. Paul Getty Medal "for extraordinary achievement in the fields of museology, art historical research, philanthropy, conservation and conservation science". [27] 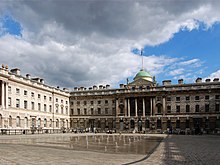 He was especially active in the project to restore Somerset House in London, for which he helped secure the Gilbert Collection and ensured the long-term future of the Courtauld Institute of Art. As a private project, he carried out the restoration of Spencer House, one of the finest surviving 18th century London townhouses, adjacent to his own offices. [28]

Furthermore, he has served as a Member of the Arts & Humanities Research Board, set up by the British Government, is an honorary fellow of the British Academy and a Trustee of the Prince of Wales’ Prince’s Charities Foundation. [38]