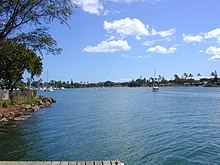 Puʻuloa Lagoon in the center of Iroquois Point Housing

Iroquois Point is a census-designated place (CDP) in Honolulu County, Hawaii, United States, on the island of Oahu near Pearl Harbor. The population was 3,374 at the 2010 census. [1] "Iroquois Point" refers to the geographic land area that is occupied by the Kapilina Beach Homes (known as "Waterfront at Pu'uloa" until 2015 and "Iroquois Point Island Club" prior to 2008), a firing range, a Navy Exchange shoppette and gas station, and Iroquois Point Elementary School. Once primarily used as a military housing community, it is now privately operated.

There were 675 households, out of which 83.6% had children under the age of 18 living with them, 95.0% were married couples living together, 1.9% had a female householder with no husband present, and 2.2% were non-families. 1.9% of all households were made up of individuals, and 0.0% had someone living alone who was 65 years of age or older. The average household size was 3.65 and the average family size was 3.68.

The name of Iroquois Point was derived from the name USS Iroquois which was held by two U.S. Navy ships. Both ships had history that related to that spot at the entrance to Pearl Harbor. USS Iroquois, a steam sloop of war commissioned in 1850, was outfitted as a hospital ship to provide care to U.S. sailors aboard vessels anchored in Honolulu Harbor, and it is believed that the ship was anchored near the present Iroquois Point site. The second USS Iroquois, a commercial steam tug commissioned in 1898, was assigned to Commander F. Merry as part of his operations at Naval Station Honolulu. [4]

Iroquois Point also had an annex to the Bishop point Section Station and Net Depot [7] across the harbor channel. The annex had a barracks, officer's quarters and 600' of pier.

Starting in the summer of 2003 this U.S. Navy property was leased to Hunt Building Co. and Fluor Federal Services LLC—a joint venture now operating as Ford Island Properties—in exchange for in-kind construction and infrastructure repairs on Ford Island. This unprecedented arrangement was made possible through special legislation passed by Congress in 1999. The Navy gave the developers a 65-year lease of Iroquois Point/Puʻuloa, a 34-acre (14 ha) parcel on Ford Island, and the 6.6-acre (2.7 ha) Hālawa Landing—all underutilized Navy properties. The developers also were allowed to purchase 695 acres (2.81 km2) of housing at Kalaeloa after three years and given outright ownership of the 515-acre (2.08 km2) former Waikele Naval Magazine (Gordon, 2005).

Built in the 1960s, the homes on the north side of Puʻuloa Lagoon were empty when renovations began in August 2003, with more than 100 tradesmen working on a daily basis, moving block by block through the housing development. Something less than half of the 1,463 homes were upgraded with an initial investment of about $20 million. Beyond that, several million dollars is to be invested for amenities, such as a community center (Gordon, 2005). Iroquois Point housing lies directly under the glideslope of runway 8L of Honolulu International Airport. Neighborhood residents are often witness to large commercial and military jets that land at the airport flying low over the area.