Interstate 580 (I-580) is a 35.187-mile (56.628 km) Interstate Highway in Western Nevada. It runs concurrently with U.S. Route 395 (US 395) from an intersection with US 50 near the southern boundary of Carson City to the Reno Spaghetti Bowl interchange with I-80 in Reno. The freeway provides a high-speed direct route between Lake Tahoe and Carson City to Reno and I-80.

Construction on a freeway between Carson City and Reno was planned since 1956, but construction did not occur until 1964. The freeway opened in sections, with the final section opening on August 2, 2017. The I-580 designation was approved on October 27, 1978, but the freeway was not signed as such until the portion between Reno and Carson City was completed following the opening of the Galena Creek Bridge in late August 2012. 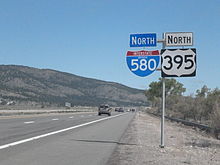 I-580 runs from an intersection with US 50 in Carson City to an interchange with I-80 near downtown Reno. The only portion remaining to be constructed is the interchange at the freeway's southern terminus. Within Reno, the freeway is designated as the Martin Luther King, Jr., Freeway. Within Carson City, the freeway is designated the Carson City Deputy Sheriff Carl Howell Memorial Freeway, in honor of a sheriff's officer who was shot to death while attempting to rescue a victim of domestic violence from her house. [2] [3]

The freeway begins at the junction of US 395 with the Lake Tahoe leg of US 50 and follows the eastern edge of Eagle Valley, where most of the population of Carson City resides. The highway loosely follows the former alignments of Edmonds Drive and Lompa Lane along the eastern half of the city, which were relocated or truncated to make room for the freeway.

After rejoining the original alignment of US 395 at the Carson Tahoe Regional Medical Center, the highway crests Lakeview Hill to enter the Washoe Valley. The portion of I-580/US 395 and US 395 Alternate through Washoe Valley are prone to high crosswinds and, as such, the highways are frequently closed to high-profile vehicles. During prohibited times, trucks are rerouted to Eastlake Boulevard and US 395 Alternate (US 395 Alt.), which is the old route of US 395. The high wind area ends near the Bowers Mansion interchange near the northern end of the Washoe Valley.

Unlike the old US 395 which ran along the valley floor of Pleasant Valley, I-580 is routed in the mountains overlooking the valley. While traversing Pleasant Valley, the highway crosses the Galena Creek Bridge, the largest cathedral arch bridge in the world. Upon the descent from these mountains the highway cuts through the center of one of the largest geothermal power plants in the United States, Ormat Industries' Nevada Power station, just before entering Reno.

View from U.S. Route 50 eastbound towards southern end of I-580 at intersection with U.S. Route 395.

At the extreme southern edge of Reno, the highway has a junction with the Mount Rose Highway ( SR 431) and Geiger Grade ( SR 341), which connect the freeway with North Lake Tahoe and Virginia City, respectively. Upon entering Reno, the freeway proceeds in a generally northern direction, crossing Virginia Street, the old routing of US 395, several times. Along the way the freeway passes to the side of The Summit mall, Meadowood Mall and Reno–Tahoe International Airport. The elevated freeway also passes over a bus garage used by RTC Washoe, the local bus agency. [4] The I-580 designation ends at the Reno Spaghetti Bowl where the highway crosses I-80; however, the freeway continues on only as US 395, heading towards the north valley neighborhoods of Sun Valley, Lemon Valley, Stead, Cold Springs Valley and Bordertown (which are all entirely part of the City of Reno) before eventually crossing the California state line.

Old US 395 running through Pleasant Valley, as seen from Geiger Grade ( SR 341), with the I-580 extension under construction in the mountains above

Development of the I-580/US 395 freeway has been in planning since 1956, but significant construction did not occur until 1964. [5] The freeway would be opened gradually over time, and would initially be constructed in two main separate sections before 2012.

The first segment of freeway constructed along I-580 was the Washoe Valley segment, which was constructed between 1964 and 1970 between present-day Bowers Mansion Road/Carson–Reno Highway (exit 50, now exit 16) near Washoe City, south through Washoe Valley to just north of North Carson Street (exit 43, now exit 8) in Carson City.

Northbound I-580 and US 395, approaching the Neil Road and Meadowood Mall Way interchange (exit 62, now exit 30)

In 2012, the section between Mount Rose Highway (exit 56, now exit 24) and Bowers Mansion Road/Carson–Reno Highway (exit 50, now exit 16) south of Reno opened following the opening of the Galena Creek Bridge to traffic in late August 2012, connecting the two main segments together. After the completion of this section, the freeway south of I-80 (US 395 southbound exit 68 and I-580 northbound exit 36) was signed as I-580, officially connecting Carson City to the Interstate Highway System. This left four other state capitals still not served by the Interstate Highway System: Dover, Delaware; Juneau, Alaska; Pierre, South Dakota; and Jefferson City, Missouri. [7]

The I-580 designation was first approved by the American Association of State Highway and Transportation Officials (AASHTO) on October 27, 1978; at the time, this route extended from I-80 to US 395 (South Virginia Street, at exit 63, now exit 31). [8] [9] AASHTO approved the remainder of planned I-580, to the southern terminus at US 50, US 395 and US 395 Bus. south of Carson City, at its December 7, 1984, meeting. [10] Despite the route number being approved and being shown on some maps in the 1980s, I-580 was not signed along the Interstate until the freeway gap between Mount Rose Highway and Bowers Mansion Road was completed in 2012.

In October 2019, NDOT began replacing US 395 exit numbers with I-580 exit numbers per federal requirements on the Manual on Uniform Traffic Control Devices. [11]

Old exits on I-580 were numbered according to US 395 mileposts.