From Wikipedia, the free encyclopedia
Genus of plants

Indigofera is a large genus of over 750 species [2] of flowering plants belonging to the pea family Fabaceae. They are widely distributed throughout the tropical and subtropical regions of the world. [2]

Species of Indigofera are mostly shrubs, though some are small trees or herbaceous perennials or annuals. Most have pinnate leaves. Racemes of flowers grow in the leaf axils, in hues of red, but there are a few white- and yellow-flowered species. The fruit is a legume pod of varying size and shape. [2]

Indigofera is a varied genus that has shown unique characteristics making it an interesting candidate as a potential perennial crop.[ clarification needed] Specifically, there is diverse variation among species with a number of unique characteristics. Some examples of this diversity include differences in pericarp thickness, fruit type, and flowering morphology. The unique characteristics it has displayed include potential for mixed smallholder systems with at least one other species and a resilience that allows for constant nitrogen update despite varying conditions.

One example of its unique flowering morphology is an open carpel not often seen elsewhere. In addition, it appears that the organ primordial[ clarification needed] is often formed at deeper layers than other eudicots. [3] This variety could have significant implications on its role in an actual perennial polyculture. For example, different flowering morphologies could be artificially selected for in varying directions in order to better fit in different environmental conditions and with different populations of other plants.

The types of fruit produced by different species of Indigofera can also be divided into broad categories that again show great variation. The three basic types of fruit categories can be separated by their curvature including straight, slightly curved, and falcate (sickle-shaped). In addition, several of the species including Indigofera microcarpa, Indigofera suffruticosa, and Indigofera enneaphylla have shown delayed dehiscence (maturing) of fruits [4] This variation could again allow for artificial selection of the most abundant and nutritious fruit types and shapes.

Another way to categorize Indigofera is by its pericarp thickness. The pericarp (the tissue from the ovary that surrounds the seeds) can be categorized as type I, type II, and type III with type I having the thinnest pericarp and fewest layers of schlerenchymatous (stiff) tissue and type III having the thickest pericarp and most schlerenchymatous layers. Despite the previous examples of delayed dehiscence, most fruits of this genus show normal explosive dehiscence to disperse seeds. [5] Similar to fruit shape, the variation in fruit sizes allows for the thickest and most bountiful fruits to be selected.

Several species, especially Indigofera tinctoria and Indigofera suffruticosa, are used to produce the dye indigo. Scraps of Indigo-dyed fabric likely dyed with plants from the genus Indigofera discovered at Huaca Prieta predate Egyptian indigo-dyed fabrics by more than 1,500 years. [6] Colonial planters in the Caribbean grew indigo and transplanted its cultivation when they settled in the colony of South Carolina and North Carolina where people of the Tuscarora confederacy adopted the dyeing process for head wraps and clothing. Exports of the crop did not expand until the mid-to late 18th century. When Eliza Lucas Pinckney and enslaved Africans successfully cultivated new strains near Charleston it became the second most important cash crop in the colony (after rice) before the American Revolution. It comprised more than one-third of all exports in value.

The chemical aniline, from which many important dyes are derived, was first synthesized from Indigofera suffruticosa ( syn. Indigofera anil, whence the name aniline).

In Indonesia, the Sundanese use Indigofera tinctoria (known locally as tarum or nila) as dye for batik. Marco Polo was the first to report on the preparation of indigo in India. Indigo was quite often used in European easel painting[ clarification needed] during the Middle Ages. [7] [8]

Indigofera suffruticosa and Indigofera aspalthoides have also been used as anti-inflammatories. [11] [12] [13] A patent was granted for use of Indigofera arrecta extract to relieve ulcer pain. [14]

The Maasai people of Kenya use parts of Indigofera brevicalyx and Indigofera swaziensis as toothbrushes. [15] 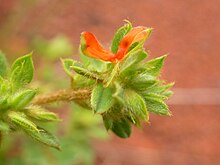 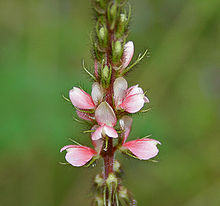 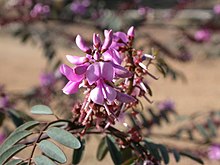 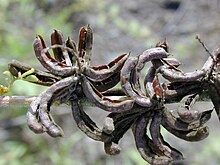 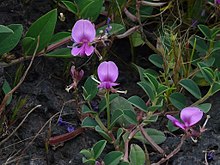 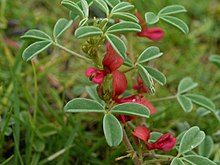 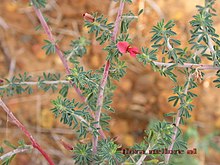 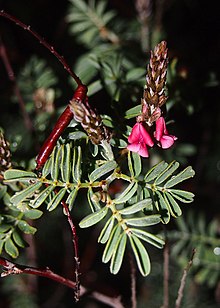 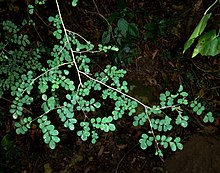 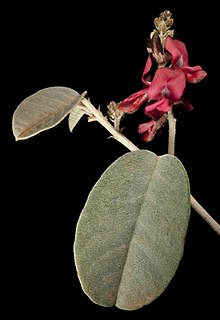 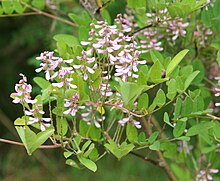 The status of the following species is unresolved: [18] [19] 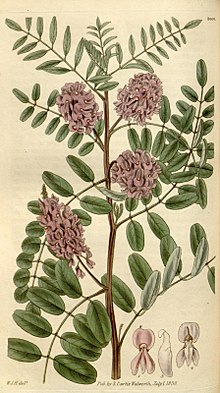 Indigofera species are used as food plants by the larvae of some Lepidoptera species, including the turnip moth (Agrotis segetum).