"Indian Reserve" is a historical term for the largely uncolonized area in North America acquired by Great Britain from France through the Treaty of Paris (1763) at the end of the Seven Years' War (known as the French and Indian War in the North American theatre), and set aside in the Royal Proclamation of 1763 [1] for use by Native Americans, who already inhabited it. [2] The British government had contemplated establishing an Indian barrier state in the portion of the reserve west of the Appalachian Mountains, and bounded by the Ohio and Mississippi rivers and the Great Lakes. British officials aspired to establish such a state even after the region was assigned to the United States in the Treaty of Paris (1783) ending the American Revolutionary War, but abandoned their efforts in 1814 after losing military control of the region during the War of 1812. [3]

In present-day United States, it consisted of all the territory north of Florida and New Orleans that was east of the Mississippi River and west of the Eastern Continental Divide in the Appalachian Mountains that formerly comprised the eastern half of Louisiana (New France). In modern Canada, it consisted of all the land immediately north of the Great Lakes but south of Rupert's Land belonging to the Hudson's Bay Company, as well as a buffer between the Province of Canada and Rupert's Land stretching from Lake Nipissing to Newfoundland.

The Royal Proclamation of 1763 organized on paper much of the new territorial gains in three colonies in North America— East Florida, West Florida, and Quebec. The rest of the expanded British territory was left to Native Americans. The delineation of the Eastern Divide, following the Allegheny Ridge of the Appalachians, confirmed the limit to British settlement established at the 1758 Treaty of Easton, before Pontiac's War. Additionally, all European settlers in the territory (who were mostly French) were supposed to leave the territory or get official permission to stay. Many of the settlers moved to New Orleans and the French land on the west side of the Mississippi (particularly St. Louis), which in turn had been ceded secretly to Spain to become Louisiana (New Spain). However, many of the settlers remained and the British did not actively attempt to evict them.[ citation needed]

In 1768, lands west of the Alleghenies and south of the Ohio were ceded to the colonies by the Cherokee at the Treaty of Hard Labour and by the Six Nations at the Treaty of Fort Stanwix. However, several other aboriginal nations, particularly Shawnee and Mingo, continued to inhabit and claim their lands that had been sold to the British by other tribes. This conflict led to Dunmore's War in 1774, ended by the Treaty of Camp Charlotte where these nations agreed to accept the Ohio River as the new boundary.

Restrictions on settlement were to become a flash point in the American Revolutionary War, following the Henderson Purchase of much of Kentucky from the Cherokee in 1775. The renegade Cherokee chief Dragging Canoe did not agree to the sale, nor did the Royal Government in London, which forbade settlement in this region. As an act of revolution in defiance of the crown, white pioneer settlers began pouring into Kentucky in 1776, opposed by Dragging Canoe in the Cherokee–American wars, which continued until 1794.

Push to settle the territory 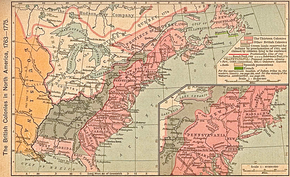 The British colonies in North America from 1763 to 1775, at the outbreak of the American Revolutionary War, including the locations of the proposed colonies of Charlotiana, Transylvania, and Vandalia

In the area of the Indian Reserve in what is now the United States, after coming under firm control of the new country, was gradually settled by European Americans and divided into territories and states, starting with the Northwest Territory. Most (but not all) Indians in the area of the former Reserve were relocated further west under policies of Indian Removal. After the Louisiana Purchase, the Indian Intercourse Act of 1834 created an Indian Territory west of the Mississippi River as a destination, until it too was divided into territories and states for European American settlement, leaving only modern Indian Reservations inside the boundaries of U.S. states.