Humboldt Park, one of 77 designated community areas, is on the West Side of Chicago, Illinois. [2] The Humboldt Park neighborhood is known for its dynamic social and ethnic demographic change over the years. The Puerto Rican community has identified strongly with the area since the 1970s; Humboldt Park is also the name of a 207-acre (0.8 km²) park adjacent to the community area.

The official community boundaries established by the City of Chicago include Bloomingdale Ave to the north, the Union Pacific railroad tracks to the south, the train tracks running between Kostner and Cicero to the west, and Humboldt Park proper to the east (to the East side of California Ave).

East Humboldt Park is bordered by Sacramento Boulevard, Western Avenue, North Avenue and Division Street. Though it is considered a part of the Humboldt Park neighborhood, it is officially a part of the West Town community area. The area has been known for its working and lower middle class Puerto Rican community from the 1970s to the 2000s, though now the area has seen a large influx of white middle to upper middle class residents due to the process of gentrification, though parts of the neighborhood is still impoverished and still is known for high crime and gang activity. The area once had the largest middle class Puerto Rican community in the Midwest. [3] The area is home to many social service institutions, bars, restaurants, cafes and shops as well as two sixty-foot Puerto Rican flags on a stretch of Division Street designated Paseo Boricua. Mayor Rahm Emanuel's sweeping school closings closed Von Humboldt Elementary, De Duprey Elementary, and Lafayette Elementary, leaving no neighborhood elementary schools in the area. [4]

K-Town is a nickname for an area in Humboldt Park, North Lawndale, and West Garfield Park [note 1] between Pulaski Road and Cicero Avenue in which the names of many north-south avenues begin with the letter K (Keystone, Karlov, Kedvale, Keeler, Kenneth, Kilbourn, Kildare, Kolin, Kolmar, Komensky, Kostner, Kilpatrick, Kenton, Knox, and Keating). The pattern is a historical relic of a 1913 street-naming proposal, by which streets were to be systematically named according to their distance from the Illinois-Indiana border; K, the eleventh letter, was to be assigned to streets within the eleventh mile, counting west from the state line. The eleventh mile is the easternmost area in which the plan was widely implemented, as many neighborhoods to the east were already developed and had street names in place. The portion of K-Town bounded by W. Kinzie St, W. Cermak Rd, S. Kostner Ave, and S. Pulaski Rd was listed as a historic district on the National Register of Historic Places on September 9, 2010. 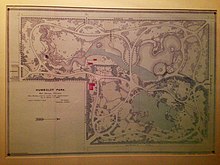 The park was named for Alexander von Humboldt (1769–1859), a German naturalist and geographer famed for his five-volume work Cosmos: Draft of a Physical Description of the World. [7] His single visit to the United States did not include Chicago. Humboldt Park is part of Chicago's Boulevard Park System, which flanks the Loop with large parks linked with boulevards. The park is lined with graystone houses and is now enjoying a non-restrictive landmark status on Kedzie Ave. The park itself has 3 major historical public buildings, including the Boat House (designed by Schmidt, Garden and Martin), the Field House (which received a 1.5 million [8] dollar renovation grant, being implemented in 2013) and the Historic Stables (described more below). 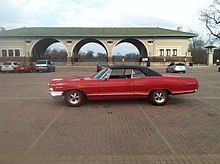 Chicago annexed most of the neighborhood in 1869, the year the park was laid out. [7] Because the area lay just beyond the city's fire code jurisdiction, as set out after the 1871 fire, this made low cost construction possible.

The neighborhood has been a center for many ethnic groups since Chicago's inception: [9]

Our Lady of the Angels School fire

Our Lady of the Angels School Fire occurred at the Our Lady of Angels School on December 1, 1958 on 909 North Avers Avenue in the Humboldt Park area. The school, which was operated by the Roman Catholic Archdiocese of Chicago, lost 92 students and three nuns in five classrooms on the second floor.

In the 1970s, Humboldt Park became more dangerous with high levels of gang activity, crime, and violence. The neighborhood was economically depressed, with housing values below the citywide average, until the recent upswing. Overcrowding remains a serious problem, as does gang activity and violent crime. Gentrification, beginning in the late 1990s, along with changing police tactics, and cultural, political and social organizations, have changed the demographics, politics, economy and rates of the area. Research indicates that as communities experience gentrification, new and more affluent residents push out legacy residents through higher property taxes, and interpersonal divestment in contributing to the culture of the neighborhood. [10] Additionally, new and more affluent residents in Humboldt Park prioritize community concerns, though the previous poorer and non-white residents are often criminalized by these new residents who increasingly use law enforcement agencies. [11] [12] 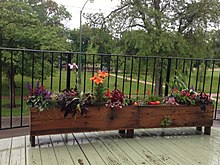 As of February 2013, the 26th Ward of the City of Chicago (which encompasses the majority of Humboldt Park) had a population of 28.0% Puerto Ricans. [15] East of Humboldt Park, which is West Town part of the First Ward, is now 45.12% white due to the larger amount of gentrification factors on the east side of the park. [16] Regardless of multiple dimensions of change in the community, Puerto Rican people are no longer in the majority in this community. Increasing property taxes [17] during the past two decades have forced out the Latino and Eastern European residents that live east of the park and this shift can be easily seen moving westward towards Kedzie Avenue past Humboldt Park and the reduced coverage and visibility of the Puerto Rican Day Parade. Consistent price increases in neighboring have out-priced gentrifiers in surrounding neighborhoods, sending them to Humboldt Park, displacing residents whom they had already displaced in the previous neighborhoods. [18] 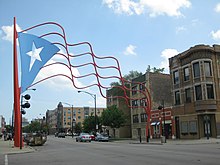 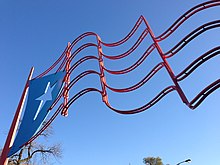 One of the two metal Puerto Rican flags at Humboldt Park

As early as the 1950s, Puerto Ricans settled in Humboldt Park. Many came directly from Puerto Rico as migration was averaging over ten thousand Puerto Ricans per year in the 1950s and 1960s, throughout the United States. Others were forced out by urban renewal from the first Puerto Rican neighborhoods of La Madison near the Eisenhower and University of Illinois campus and from Old Town and Lincoln Park, then called La Clark. The infamous Division Street Riots resulted in the start of organizations for Puerto Rican rights in 1966. Organizations like the L.A.D.O.(Latin American Defense Organization), S.A.C.C. ( Spanish Action Committee of Chicago) and the Caballeros de San Juan and Damas de Maria, helped to slow down the riot caused by a police shooting of an unarmed youth.[ citation needed] Another smaller riot took place in Lincoln Park in 1967. The Young Lords, under the leadership of Jose Cha Cha Jimenez worked with gangs like the Latin Kings, the Spanish Cobras, the Latin Disciples and the above-mentioned community organizations to build unity and to redirect youth energies toward education and empowerment strategies. To the Young Lords it was one community and they organized several solidarity marches from Lincoln Park to Humboldt Park and to City Hall; demanding social services, an end to police brutality and an end to neighborhood displacement. The last point refers especially to the Puerto Rican community's (socio-economic-culturally forced) migration West in the City from Lincoln Park. [13]

In 1995 city officials and Puerto Rican-American activists in a symbolic gesture to recognize the neighborhood and the Puerto Rican residents' roots, christened a stretch of Division Street " Paseo Boricua". Two metal 59 feet (18 m)-tall Puerto Rican flags, each weighing 45 tons, arch over the street at each end of the strip. There is a proud historical and ongoing imprint of Puerto Rican identity in Humboldt Park.

Fiestas Puertorriqueñas and The People's Parade on Division Street 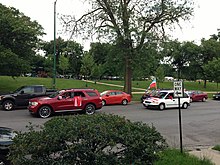 Every summer, there is the tradition of Fiestas Puertorriquenas in Humboldt Park (the park itself, as well as the neighborhood). The parade, named The People's Parade, takes place along Division Street between Western Avenue and California Avenue. The park is transformed into a party, replete with top live performers of salsa, merengue, bomba, plena, reggaeton (and its relative, hip-hop espanol) and other Puerto Rican and related Afro-Caribbean music (e.g. Dominican-based Bachata; Cuban Son, Son-Montuno, Rumba). There is a carnival with amusement rides and Puerto Rican food: arroz con gandules, pollo guisado, pinchos, mofongo, and alcapurrias (just to name a few of the foods). Vendor booths purvey the food as well as deejays playing traditional and new Chicago house music with Spanish vocals and soulful (often orchestral Latin-jazz laden) Afro-Caribbean syncopated rhythms. [19]

In 2015, after some members of the community protested the presence of Riot Fest as a sign of gentrification in the neighborhood (along with the prolonged closure of the park for cleanup and repair after the 2014 event), [21] Alderman Roberto Maldonado vocally opposed allowing the event to continue using Humboldt Park. [22] [23] The festival ultimately relocated to North Lawndale's Douglas Park, which initially prompted some protest as well, although most concerns about the festival have subsided in recent years. [24] [25]

The Greater Humboldt Park Community of Wellness is a coalition of neighborhood organizations that all focus on improving the quality of health and awareness of health in the following areas: asthma, active lifestyles, behavioral health, diabetes, health careers, HIV/AIDS, oral health, and school health. The coalition works within the Humboldt Park community area as well as the West Town community area, and mainly focuses on the health needs of Puerto Rican, Mexican, and Black residents within the neighborhood to support low-income residents who may not have access to health services. VIDA/SIDA, a project of the Puerto Rican Cultural Center, has a major presence in the community, educating the neighborhood on sexual health and LGBTQ issues, especially within the Latino/a community.

Founded in 2007 to organize those who live East of the Park and participate in the Chicago Police Department's CAPS Beat 1423 initiatives. The foundational intents are three-fold:

Originally completed in 1895 by Chicago architects Frommann and Jebsen, the Humboldt Park Stable and Receptory is listed on the National Register of Historic Places and is a Chicago Landmark. The building's design highlights the Germanic character of the neighborhood in the 1890s and is a fanciful creation of various roofs, finials, brick, and half-timbering. The Institute of Puerto Rican Arts and Culture has a 15 year lease that began in May 2006 and expires in 2021. [26] It is dedicated to the history of Puerto Rican culture and the Puerto Rican diaspora. Funding from an ISTEA grant allowed the Chicago Park District to fully restore the building. [27] About $3.4 million was spent to renovate the exterior of the building ($1 Million came from City of Chicago Tax Increment Finance (TIF) [28] and another $3.2 (State of Illinois Grant) [28] million for the interior. The stables were once in use by a special Chicago Parks Police Force and is located at 3015 W. Division St. The turret on the Southeast corner of the building was part of the office of Jens Jensen, a landscape architect who left his mark on the impressive design of the park's natural hardscape and water features. [29]

Cultural references to the community

Humboldt Park figures prominently in the literary works that chronicled Chicago's blue collar life in the 1950s and 1960s.

Humboldt Park has also been featured in film and television.

Currently East Humboldt Park has no public school buildings. In 2012 CPS decided to close three K-8 schools: Duprey, Lafayette, Ryerson, and Von Humboldt. At the time Duprey had 100 students and it was considered to be the least-used school building in CPS. [36] At the time 30% of the Lafayette students were special education students who lived in various parts of Chicago. Lafayette-zoned persons were rezoned to Chopin School. [37] Laura S. Ward Elementary School moved into the former Ryerson building. Ryerson merged with Ward, which was previously in Garfield Park. [38]

Notable people who lived in or are connected with Humboldt Park