The Hughes Aircraft Company was a major American aerospace and defense contractor founded in 1932 by Howard Hughes in Glendale, California [1] as a division of Hughes Tool Company. The company was known for producing, among other products, the Hughes H-4 Hercules Spruce Goose aircraft, the atmospheric entry probe carried by the Galileo spacecraft, and the AIM-4 Falcon guided missile. [2] [3]

Hughes Aircraft was acquired by General Motors from the Howard Hughes Medical Institute in 1985 and was put under the umbrella of Hughes Electronics, now known as DirecTV, until GM sold its assets to Raytheon in 1997. [4] [5]

Hughes logo, adopted after the death of its founder 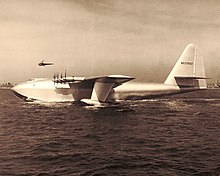 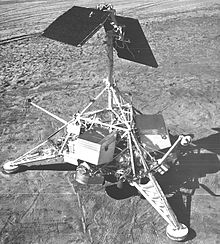 Hughes developed the AIM-120 AMRAAM, one of the world's most advanced air-to-air missiles.

During World War II the company designed and built several prototype aircraft at Hughes Airport. These included the famous Hughes H-4 Hercules, better known by the public's nickname for it, the Spruce Goose, the H-1 racer, D-2, and the XF-11. [6] However the plant's hangars at Hughes Airport, location of present-day Playa Vista in the Westside of Los Angeles, California, were primarily used as a branch plant for the construction of other companies' designs. At the start of the war Hughes Aircraft had only four full-time employees—by the end the number was 80,000. [7] [8] During the war, the company was awarded contracts to build B-25 struts, centrifugal cannons, and machine gun feed chutes. [9]

Hughes Aircraft was one of many aerospace and defense companies which flourished in Southern California during and after World War II and was at one time the largest employer in the area.

Yet, employment had dropped to 800 by 1947. By the summer of 1947 certain politicians had become concerned about Hughes' alleged mismanagement of the Spruce Goose and the XF-11 photo reconnaissance plane project. They formed a special committee to investigate Hughes which culminated in a much-followed Senate investigation, one of the first to be televised to the public. Despite a highly critical committee report, Hughes was cleared. [9]:198–207,259

In 1948 Hughes created a new division of the company, the Aerospace Group. Two Hughes engineers, Simon Ramo and Dean Wooldridge, had new ideas on the packaging of electronics to make complete fire control systems. Their MA-1 system combined signals from the aircraft's radar with a digital computer to automatically guide the interceptor aircraft into the proper position for firing missiles. At the same time other teams were working with the newly formed US Air Force on air-to-air missiles, delivering the AIM-4 Falcon, then known as the F-98. The MA-1/Falcon package, with several upgrades, was the primary interceptor weapon system of the USAF for many years, lasting into the 1980s. Ramo and Wooldridge, having failed to reach an agreement with Howard Hughes regarding management problems, resigned in September 1953 and founded the Ramo-Wooldridge Corporation, later to join Thompson Products to form the Thompson-Ramo-Wooldridge based in Canoga Park, with Hughes leasing space for nuclear research programs (present day West Hills (Canoga Park). [10] The company became TRW in 1965, another aerospace company and a major competitor to Hughes Aircraft.

In 1951 Hughes Aircraft Co. built a missile plant in Tucson, Arizona. The construction of this plant, wrote David Leighton, in the Arizona Daily Star newspaper, was due to "Howard Hughes’ long-held fear that his plant in Culver City, California, was vulnerable to enemy attack because it was on the Pacific Coast." By the end of that year, the U.S. Air Force had purchased the property but allowed the company to continue to run day to day operations of the site. This Tucson plant is still in operation under the ownership of Raytheon Co. [11]

Under Hyland's guidance, the Aerospace Group continued to diversify and become massively profitable, and became a primary focus of the company. The company developed radar systems, electro-optical systems, the first working laser, aircraft computer systems, missile systems, ion-propulsion engines (for space travel), and many other advanced technologies. The 'Electronic Properties Information Center' (EPIC) of the United States was hosted at the Hughes Culver City library in the 1970s. EPIC published the multi-volume Handbook of Electronic Materials as public documents. [13]

Nobel Laureates Richard Feynman and Murray Gell-Mann had Hughes connections: Feynman would hold weekly seminars at Hughes Research Laboratories; Gell-Mann shared an office with Malcolm Currie, later a chairman of the board and chief executive officer at Hughes Aircraft. Greg Jarvis and Ronald McNair, two of the astronauts on the last flight of the Space Shuttle Challenger, were Hughes alumni.

Hughes Aircraft Ground Systems Group was located in Fullerton, California. The facility was 3 million square feet and included manufacturing, laboratories, offices, and a Munson road test course. It designed developed and produced the Air Defense Systems that replaced the Semi Automatic Defense Ground Environment (SAGE) in the United States with the Joint Surveillance System (JSS) AN/FYQ-93 including NORAD with Joint Tactical Information Distribution System (JTIDS) and provided defense systems and air traffic control systems around the world. These systems are massive and at its peak Ground Systems Group employed 15,000 people and generated revenue in excess of $1 billion per year.

Hughes Space and Communications Group and the Hughes Space Systems Division built the world's first geosynchronous communications satellite, Syncom, in 1963 and followed by the first geosynchronous weather satellite, ATS-1, in 1966. Later that year their Surveyor 1 made the first soft landing on the Moon as part of the lead-up to the moon landings in Project Apollo. Hughes also built Pioneer Venus in 1978, which performed the first extensive radar mapping of Venus, and the Galileo probe that flew to Jupiter in the 1990s. [7] The company built nearly 40 percent of commercial satellites in service worldwide in 2000. [15]

In 1947, Howard Hughes redirected Hughes Aircraft's efforts from airplanes to helicopters. The effort began in earnest in 1948, when helicopter manufacturer Kellett Aircraft Co. sold its latest design to Hughes for production. The XH-17 "Sky Crane" first flew in October 1952, but was commercially unsuccessful. In 1955, Howard Hughes split the helicopter production unit from the Hughes Aircraft Company, and reconstituted it with Hughes Tool Company, calling it Hughes Tool Company's Aircraft Division. The Aircraft Division had a focus on the production of light helicopters, mainly the Hughes 269/ 300 and the OH-6 Cayuse/ Hughes 500.

Hughes left no will and following his death in 1976 there were numerous claims to his estate. A Hughes executive and a Hughes lawyer claimed they had the right to set up an "executive committee" to take over the running of the HHMI and its Hughes Aircraft subsidiary. The Attorney General of Delaware Richard R. Wier [16] challenged this and filed suit in 1978. Charles M. Oberly continued the action when he became attorney general in 1983. Oberly stated he wished to see an independent board of trustees to ensure both that the institute fulfilled its charitable mission and that it did not continue to operate as a tax shelter. [17]

In January 1984 Judge Grover C. Brown ruled that the Chancery Court should appoint the trustees because Hughes had not left a succession plan. Brown asked for both the executive committee and the attorney general's office to submit a list of recommendations that he could approve. Brown approved a list in April 1984. [17] In January 1985 the new board of trustees of the HHMI announced they would sell Hughes Aircraft either by private sale or public stock offering. [18]

On June 5, 1985 General Motors was announced as the winner of a secretive five-month sealed-bid auction. Other bidders included Ford Motor Company and Boeing. [19] The purchase was completed on December 20, 1985, for an estimated $5.2 billion, $2.7 billion in cash and the rest in 50 million shares of GM Class H stock. [20]

In 1997 GM transferred Delco Electronics to its Delphi Automotive Systems business. Later that year the assets of Hughes Aircraft were sold to Raytheon for $9.5 billion. [24] The remaining companies remained under the Hughes Electronics name and within GM.

The wide range of science and technology developed by Hughes Aircraft never included medical applications because the company was owned by the Howard Hughes Medical Institute (HHMI). This restriction was imposed to avoid even the appearance of a conflict of interest. [26]

However the money provided to HHMI by Hughes Aircraft led to major improvements to the medical field from genetics, cancer research, to producing doctors who provide care to millions of people.

The city of Fullerton, California named Hughes Drive after the site that the company formerly occupied before 1997. After Hughes closed, the city developed Amerige Heights, a residential community.

Hughes logo, adopted during the period (1997-2000) between the sales of portions of the company to Raytheon and Boeing. Each subsidiary of Hughes Space and Communications Company placed their name at the bottom of the logo.