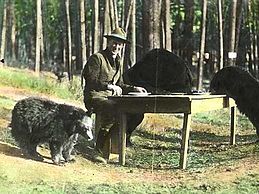 Horace Albright was born in 1890 in Bishop, California, the son of George Albright, a miner. He graduated from the University of California, Berkeley in 1912, and earned a law degree from Georgetown University. Albright married his college classmate Grace Noble and they had two children.

After graduation, he worked for the Department of the Interior in Washington, D.C. Albright became a legal assistant to Stephen Mather when Mather became Assistant Secretary in charge of National Parks, and later assisted Mather when the National Park Service (NPS) was established in 1916. As legal assistant he helped acquire land for several new national parks in the east. When Mather became ill, Albright managed the NPS as acting director. He later served as superintendent of Yellowstone National Park and, for a short time, Yosemite National Park. On October 18, 1922, he was elected Associate Member of the Boone and Crockett Club, a wildlife conservation organization founded by Theodore Roosevelt and George Bird Grinnell, in 1887.

On January 12, 1929, Albright succeeded Mather as the second director of the NPS and held the post until August 9, 1933. In 1933 Albright resigned to work for the U.S. Potash Corporation and U.S. Borax and Chemical Corporation, serving variously as director, vice president, and general manager. During this time they lived in New Rochelle, New York. In 1937, his portrait was painted by artist Herbert A. Collins. [1]

The nation's highest civilian award, the Presidential Medal of Freedom, was awarded to Albright by President Jimmy Carter on the 64th anniversary of the National Park Service. President Carter announced the award in August 1980, and the medal was presented on December 8 by Assistant Secretary of the Interior Robert L. Herbst, in a ceremony at Van Nuys, California.