Honolulu Harbor, also called Kulolia and Ke Awa O Kou, is the principal seaport of Honolulu and the State of Hawaiʻi in the United States. From the harbor, the City & County of Honolulu was developed and urbanized, in an outward fashion, over the course of the modern history of the island of Oahu. It includes Matson, Inc. harbors on Sand Island.

Archaeological surveys show that the area around Honolulu Harbor was bustling with human activity prior to 1100. The first European vessel to enter Honolulu Harbor was a long-boat from the British merchant ship King George. The boat rowed into the harbor on December 12, 1786, commanded by a Mr. Hayward and piloted by Towanooha, servant of a friendly Hawaiian priest. In 1794, Butterworth, a British ship commanded by Captain William Brown, entered the harbor by "warping" in. The crew dubbed it "Brown's Harbor" to their captain's dismay. Captain Brown insisted that the harbor be called "Fair Haven", which is synonymous with the Hawaiian name Honolulu. 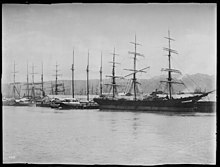 In 1850, Kamehameha III declared Honolulu to be the official capital of the Kingdom of Hawaiʻi. With the proclamation came a series of investments to further develop the harbor to accommodate more vessels. Honolulu Harbor quickly became the chief port of call for the trans-Pacific sandalwood, fur and whaling industries. Foreign vessels that docked at Honolulu Harbor poured vast amounts of wealth into the kingdom's coffers and provided for the well-being of native Hawaiians. The British subsequently built a fort to protect the entrance to the harbor.

The harbor was dredged to allow the easy passage of trans-Pacific deepwater sailing vessels. The sediment was dumped in tidelands and marshes, forming new land. [1] As the downtown waterfront was developed and the many high-rises along the waterfront were constructed, early artifacts such as poi pounders, fishing lures and even human remains were unearthed along the current waterfront and along the docks near the Aloha Tower adjacent to Alakea Street and Nimitz Highway.

Honolulu Harbor is administered by the Hawaiʻi Department of Transportation Harbors Division. Honolulu Harbor handles over 11 million tons of cargo annually. The services that the harbor provides are crucial as Hawaiʻi imports over eighty percent of its required goods. 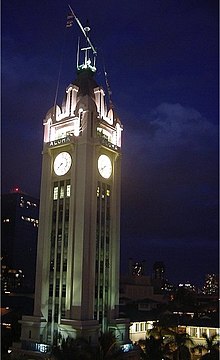 Aloha Tower has been greeting vessels to port at Honolulu Harbor since September 11, 1926.

In 1982, the Hawaiʻi Maritime Center was opened near the Aloha Tower in an old royal pier to present the history of Honolulu Harbor and the relative industries it served. Falls of Clyde, a historic merchant ship, is docked at the royal pier. In 2002, the Hawaiʻi Maritime Center became an incorporated institution of the Bishop Museum. In 1994, the Aloha Tower Marketplace opened.