Homestead is a city within Miami-Dade County in the U.S. state of Florida, between Biscayne National Park to the east and Everglades National Park to the west. Homestead is primarily a Miami suburb and a major agricultural area. It is a principal city of the Miami metropolitan area, which was home to an estimated 6,012,331 people at the 2015 census.

Homestead was incorporated in 1913 and is the second oldest city in Miami-Dade County next to the city of Miami. It is located approximately 35 miles (56 km) southwest of Miami, and 25 miles (40 km) northwest of Key Largo. The name originates from when the Florida East Coast Railway extension to Key West was being built. The rail line was passing through an area opened up for homesteading, and as the construction camp at the end of the line did not have a particular name, construction materials and supplies for the workers were consigned to "Homestead Country", shortened to "Homestead" by the engineers who mapped the area. [5] The population was 60,512 at the 2010 census. Homestead and neighboring South Miami-Dade County communities bore the brunt of Category 5 Hurricane Andrew on August 24, 1992.

The city of Homestead is located near the southern terminus of the Homestead Extension of Florida's Turnpike where it ends at its junction with U.S. 1. Homestead is immediately north and east of Florida City, and these two cities comprise the greater Homestead-Florida City area. Some of the notable unincorporated communities in the area are Redland, Leisure City, Naranja, and Princeton.

Homestead is a small-sized city. At its greatest north-south points – along SW 137th Avenue (Speedway Boulevard) – its city limits extend only 4 miles (6 km) – from SW 288th Street (Biscayne Drive) at the north end to (theoretical) SW 352nd Street at the south end. At its greatest east-west points – along SW 328th Street (North Canal Drive / Lucy Street) – its city limits extend 6 miles (10 km) – from (theoretical) SW 132nd Avenue at the east end to SW 192nd Avenue at the west end. U.S. 1 – known as Homestead Boulevard within the city limits – extends through a rather narrow northeast / southwest corridor of the city from SW 304th Street (Kings Highway) at the north end to SW 328th Street (Lucy Street) at the south end. It is at this point at the south end that Homestead and Florida City share a common border. (North of the north end at SW 304th Street is known as Unincorporated Miami-Dade County, but it is locally known as the community of Leisure City).[ citation needed]

The original Homestead Air Force Base was once located several miles to the northeast of Homestead, but due to annexation of formerly unincorporated land immediately to the east and northeast of the original city limits during the late-1990s the city and the far southwestern perimeter of the (now) Homestead Air Reserve Base share a common border for a small portion along SW 137th Avenue (Speedway Boulevard).

A noteworthy tourist attraction within Leisure City is Coral Castle, built by a jilted lover, Edward Leedskalnin, over the course of 28 years from 1923 to 1951. [7] The Fruit and Spice Park is also of interest.[ citation needed]

Homestead experiences a tropical savanna climate ( Köppen climate classification Aw) that borders on a tropical monsoon climate (Am). Summers are hot and humid and high temperatures average between 88° and 92 °F (31° to 33 °C). Winters are warm and dry. The all-time record high temperature is 100 °F (38 °C), on 21 July 1942. Lows in summer average between 70° and 75 °F (21° to 24 °C), with low temperatures in all times of year averaging 5–15 degrees cooler than coastal Miami, mainly because of its inland and rural location. In winter, the area sees cold fronts bring cold weather for short periods from November to March. The lowest temperature ever recorded is 26 °F (-3 °C), on 13 December 1934, which was recorded at Homestead Air Force Base, some 10 miles east of the town. High temperatures in winter average between 68° and 80 °F (18° to 26 °C), and lows average between 57° and 64 °F (8° to 14 °C). [8] Summer is the season when most of the rain occurs. Homestead has a wet season lasting from mid-May to early October. The dry season sees little if any rain, with most of it coming with the passing of cold fronts. Snow flurries were reported to have been observed in the air at Homestead Air Force Base, on January 20, 1977, and marked the farthest south that snow flurries have ever been reported in the lower 48 United States.

In August 1992, the Category 5 hurricane Andrew devastated the town, as well as nearby Homestead Air Force Base. Hurricane Katrina caused flooding in Homestead in August 2005. [10] The following October, Hurricane Wilma damaged light poles, grandstands, garages, and sections of catch fence at the Homestead–Miami Speedway, a motor racetrack built in the years following Hurricane Andrew. [11] After Hurricane Wilma, a Homestead man was killed in a tractor accident while clearing debris. [12]

When Hurricane Irma struck Florida in September 2017, parts of Homestead lost electric power. South Dade Center, a low-income housing project for farmworkers, was flooded with rainwater. Residents were without electricity and waste collection for about a week without relief. [13]

"Inside Homestead TV" is a television program where viewers can find out about all the happenings in Homestead. Each month, a news show is released offering Homestead residents updates on local events as well as other developments throughout the region. Also, the program has in-depth interviews with the local Mayor & Council and City Staff, special events coverage, and how-to videos.

On October 11, 1957, a plane carrying a nuclear bomb crashed on takeoff at Homestead Air Reserve Base. [24]

The principal roadways linking Homestead with the rest of Miami-Dade County are US 1, the Florida Turnpike and State Road 997. The Florida Turnpike has three exits (6, 5 and 2) as it runs south through eastern Homestead before eventually terminating at US 1 in Florida City. US 1 (Homestead Blvd.) runs northeast-to-southwest roughly through the middle of the city, and is the only way to continue to the Florida Keys. State Road 997 (Krome Ave.) runs north-south through the western end of Homestead and through the historic downtown district.

The City of Homestead operates two local circulator Homestead Trolley lines. This free service operates daily and transits principal residential, business and commercial areas, as well as the historic downtown district and Miami-Dade College's Homestead Campus. The Trolley connects with Metrobus at the Busway and other Metrobus stops throughout the city. [25]

Starting in 2014 the Homestead Trolley began seasonal service to Everglades National Park and Biscayne National Park. The free Homestead National Parks Trolley is offered by the City of Homestead in partnership with the National Park Service. Operating on weekends between January and April, the service is the only public transportation option available to these two parks. [26] [27] [28] [29]

Most major national car and truck rental companies have rental locations in Homestead or its immediate surroundings. 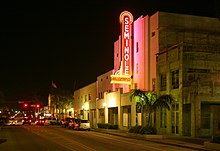 Homestead is within the Miami-Dade County Public Schools district.

Homestead and the region are zoned to the following elementary, middle and K-8 center schools:

Homestead is zoned to South Dade Educational Center.[ which?]

The Roman Catholic Archdiocese of Miami previously operated Sacred Heart School in Homestead. [32] It closed in 2009. [33]