The Hilton Hawaiian Village Waikiki Beach Resort is a resort hotel on Waikiki Beach in Honolulu, Hawaii. The resort first opened in 1955, [1] and since has grown to become the largest in the Hilton chain of hotels, and one of largest hotels in the world.

Located on the Hawaiian island of O'ahu, the John Ena Estate was originally built on the site of the former village of Kalia, which was the childhood home of Duke Kahanamoku. It consisted of a private estate with an owners' residence, tenant houses and a salt flat. The portion of the estate nearest the ocean beach was developed around 1900 as a small hotel named the Old Waikiki, then redeveloped in 1928 as the Niumalu Hotel. [2]

The Hawaiian Village Hotel was conceived, constructed and first administered by Henry J. Kaiser, the industrialist who built the Hoover Dam and Grand Coulee Dam and founded the Kaiser Permanente health system. In 1954, Kaiser and developer Fritz B. Burns bought the 16 acres (6.5 ha) Kalia estate of John Ena and combined it with the Niumalu Hotel to construct the Hawaiian Village, converting the flat to a lagoon. They built thatched-roof cottages with 70 guest rooms, The Tapa Room, gardens and three swimming pools and the hotel opened on September 15, 1955. [3] On May 1, 1956, Western Hotels assumed management of the Hawaiian Village Hotel. [4] In 1957, the modern Ocean Tower and the famous Geodesic Dome were added. Conrad Hilton bought half of the resort from Henry J. Kaiser in 1961. Hilton Hotels & Resorts assumed management on February 1, 1961, renaming the resort the Hilton Hawaiian Village. [5] Elvis Presley stayed at the hotel soon after while filming Blue Hawaii. In 1968, the resort's iconic Rainbow Tower opened, with the world's largest and tallest ceramic tile mosaic on its facade, an image of a rainbow measuring 26 feet wide and 286 feet tall, which required over 16,000 individual tiles. The Tapa Tower was added in 1982, and the original Ocean Tower was gutted and rebuilt in 1987, with the addition of two floors, at which point it was renamed the Ali'i Tower. The 25-story Kalia Tower was added in 2001.

In 2006, Hilton Hotels received $25 million in settlement of its lawsuit over toxic mold growth in the Hilton Hawaiian Village's Kalia Tower. [6]

Today, the Hilton Hawaiian Village Hotel sits on over 22 acres (8.9 ha) of beachfront property, near the Ala Moana Center. It features the largest swimming pool in Waikiki, over twenty-two restaurants, exotic wildlife, and botanical gardens, Duke's Lagoon and historical exhibits on loan from the Bishop Museum. 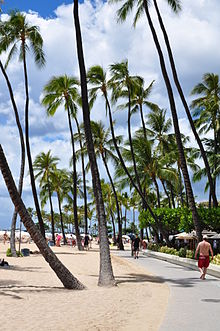 The main concept of the Hawaiian Village was to provide a complete Hawaiian experience for guests without leaving the resort, meaning guests could potentially stay at the resort the whole duration of their stay and be equipped with restaurants, shops, and more.

In building the Hawaiian Village Hotel, Kaiser developed the "village plan" for his resort. In the village plan, various sections of the development were designed in specific types of motifs indicative of the culture of the hotel's surroundings. The various villages in the present-day Hilton Hawaiian Village Beach Resort and Spa surround centerpiece towers: Diamond Head Tower, Ali'i Tower, Tapa Tower, Rainbow Tower, Lagoon Tower, Kalia Tower Grand Waikikian, and Grand Islander. The newest tower is the Grand Islander, which was opened to the public March 1, 2017.

Kaiser's village plan is now used in various layouts of hotels and resorts throughout the world.

The Village Hotel includes a small pond filled with several types of turtles ( box and soft-shelled). Other animals that live on the grounds include several types of ducks, lesser flamingos, sacred ibis, black-crowned night herons, koi fish, chameleons, macaws, and parakeets. As of June 2014, Hilton Hawaiian Village relocated their 3 remaining South African black-footed penguins to the Maryland Zoo in Baltimore.

The Village was the site one of the earlier geodesic domes constructed in the United States.

Wanting an auditorium at the Honolulu village, Henry Kaiser acquired the license to produce geodesic domes following the design work of Buckminster Fuller. An aluminium-skinned dome with a 145 ft (44 m)-wide span was manufactured at the company's plant in Oakland, California and shipped to Hawaii in 1957. When Kaiser understood that the materials had arrived in Hawaii, he flew from San Francisco to follow the construction — only to discover the building was already complete, having been constructed in only 22 hours.

Many records of the golden age of Exotica, notably most of Arthur Lyman's albums, were recorded at the dome, renowned for its acoustics and natural reverberation. It was demolished in 1999 to make room for the Kalia Tower.