From Wikipedia, the free encyclopedia
(Redirected from Highest-income counties in the United States)
Wikipedia list article 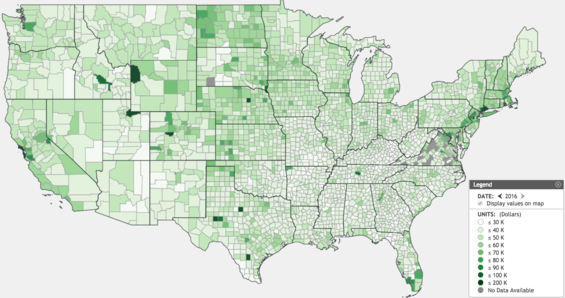 Per capita income by county

Before the American Civil War, the wealthiest counties were primarily located in Louisiana and Mississippi. [1]

Presented below are the 25 highest-income counties (with populations of 65,000 or greater) in the United States by median household income according to the 2016 American Community Survey [4] prepared by the US Census Bureau. Five of the counties are located in Virginia, five in Maryland, four in California, three in New Jersey, two in New York, and one each in: Colorado, Georgia, Massachusetts, Ohio, Tennessee, and Texas. (Disclaimer: This only includes counties that participated in this single survey)

The rankings are based on the median annual household income estimates from 2005 to 2009 in each county in the nation, provided by the United States Census Bureau's American Community Survey, in 2009 inflation-adjusted dollars. [8] Since cities in Virginia are independent of surrounding counties they are included in the Census Bureau's ranking.

[9] This data is average 2006–2008 from the American Community Survey of the United States Bureau of the Census. Number of counties by state in following lists: Virginia 6 plus 2 independent cities, Maryland 4, New Jersey 3, New York 3, California 2, Colorado 1, Georgia 1, Pennsylvania 1, Tennessee 1, Utah 1.

Number of counties by state in the top 20: Virginia 5 plus 1 independent city, California 3, Maryland 3, New Jersey 3, New York 2, Colorado 1, Georgia 1, Tennessee 1. Forty-two states do not have any counties in the top 20. 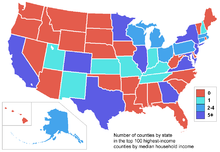 Number of counties by state in the top 100 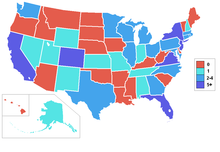 Number of counties ranked in the top 100 nationally, by state

Highest-income counties and places by state

For more detailed lists of rankings of counties and places in the individual states, see the following pages: