Henry Woodfin Grady (May 24, 1850 – December 23, 1889) was an American journalist and orator who helped reintegrate the states of the Confederacy into the Union after the American Civil War. Grady encouraged the industrialization of the South. He has been accused of preaching white supremacy [2], though Atlanta journalists including Norman Shavin and Bruce Galphin in their history of the city, Atlanta: Triumph of a People, never describe him that way. Rather, Shavin and Galphin wrote: "He was a civic promoter, a political strategist and an eloquent platform speaker who brilliantly captivated Northerners and Southerners alike as he envisioned a great future for his region while loving the memory of the old South." Atlanta journalist Frederick Allen, in his book Atlanta Rising, described Grady as a visionary. Comments definitively labeling Grady a racist led to desecration in June 2020 of the family grave site in Atlanta. [3] Grady was the father-in-law of Federal Reserve Chairman Eugene Robert Black and grandfather of banker and World Bank President Eugene R. Black Sr.

As a teenager, Henry Grady experienced fierce Civil War fighting in his home state of Georgia and his father William was killed by a Union soldier. After his father's death, he was raised by his mother Anne in Athens, Georgia. He was educated in the classical tradition of a southern gentleman of the time at the University of Georgia ( Bachelor of Arts in 1868). In 1867, he became a member of the Phi Kappa Literary Society, and later attended the University of Virginia to study law, but became especially interested in the Greek and Anglo-Saxon languages, history, and literature, which led to a career in journalism.

Grady was a lifelong devoted member of the Chi Phi Fraternity. He was a charter member of the Eta Chapter of Chi Phi at the University of Georgia. In 1882 he was elected as the first Grand Alpha (National President) from the south after the union of the Northern and Southern Orders of Chi Phi in 1871

Upon graduation, he held a series of brief journalistic jobs with the Rome Courier, the Atlanta Herald, and the New York Herald. After working in New York City, Grady returned to the South as a reporter-editor for the Atlanta Constitution.

In 1880, with $20,000 borrowed from Cyrus West Field, Grady bought a one-fourth interest in the paper and began a nine-year career as one of Georgia's most celebrated journalist-publishers. On the business end, he quickly built the newspaper into the state's most influential, with a national circulation of 120,000.

In the tumultuous decades following Reconstruction, when hatreds lingered and many whites worked to re-establish white supremacy, Grady popularized an antithesis between the "old South" which "rested everything on slavery and agriculture, unconscious that these could neither give nor maintain healthy growth," and a " new south" – "thrilling with the consciousness of growing power and prosperity:"

The new South presents a perfect democracy...; a social system compact and closely knitted, less splendid on the surface, but stronger at the core; a hundred farms for every plantation, fifty homes for every palace; and a diversified industry that meets the complex needs of this complex age [4]

as he said in an 1886 speech in New York. His audience included J. P. Morgan and H. M. Flagler at Delmonico's Restaurant, at a meeting of the New England Society of New York.

From 1882 to 1886, along with Nathaniel E. Harris, Grady promoted the founding in Atlanta of the Georgia Institute of Technology (Georgia Tech), a state vocational education school intended to train workers for new industries.

Orator and spokesman for the "New South" 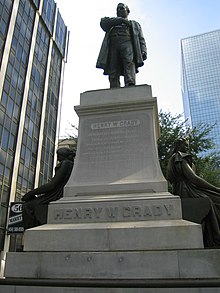 Grady was also praised for his great passion for political oratory (he supported Prohibition and a Georgia veterans' home for disabled or elderly Confederate soldiers), commitment to the new peace, and well-known sense of humor.

That sense of humor and quick wit got Grady through more than one difficult situation. Once at a banquet of northern elites, he was waxing eloquent about the brilliant prospects for northern investments in a New South determined to rise from the ashes of defeat. Grady spotted General William T. Sherman in the audience, the celebrated Yankee soldier who was credited with defeating and burning much of Georgia, and particularly Atlanta, on his infamous march to the sea. Without missing a beat, Grady acknowledged the general by noting that the people of Georgia thought Sherman an able military man, "but a mite careless about fire."

In another speech, Grady wanted to gently chastise his Southern audience for what he believed to be Georgia's economic shortcomings. Rather than pounding them with statistics, he entertained them with stories that made the points. He said:

I attended a funeral once in Picken's county in my State. This funeral was peculiarly sad. It was a poor "one gallus" fellow, whose breeches struck him under the armpits and hit him at the other end about the knee—he didn't believe in decollete clothes. They buried him in the midst of a marble quarry: they cut through solid marble to make his grave, yet a little tombstone they put above him was from Vermont. They buried him in the heart of a pine forest, and yet the pine coffin was imported from Cincinnati. They buried him within touch of an iron mine, and yet the nails in his coffin and the iron in the shovel that dug his grave were imported from Pittsburg. They buried him by the side of the best sheep-grazing country on the earth, and yet the wool in the coffin bands and the coffin bands themselves were brought from the North. The South didn't furnish a thing on earth for that funeral but the corpse and the hole in the ground. There they put him away and the clods rattled down on his coffin, and they buried him in a New York coat and a Boston pair of shoes and a pair of breeches from Chicago and a shirt from Cincinnati, leaving him nothing to carry into the next world with him to remind him of the country in which he lived, and for which he fought for four years, but the chill of blood in his veins and the marrow in his bones.

The Georgia Historical Quarterly brought that story full circle, noting Grady's response to the eventual growth of quarries in Pickens County. He boasted that the grave he had so often referenced in his speeches lay less than 100 yards from one of the quarries. Grady believed, according to the Georgia Historical Quarterly, that he had lived long enough to see his vision of an industrially independent New South come true.

Grady's prestige reached such a height that he became the only non-member ever to adjourn the Georgia Legislature. It occurred on the election of Grover Cleveland to the presidency. News of the close contest arrived at 11 a.m. during the Legislature's session. In his exuberance, Grady rushed to the Capitol with the announcement. He brushed past the doorkeeper and into the chamber shouting in senatorial tones, "Mr. Speaker, a message from the American people." Sensing the purpose of the intrusion, the Speaker offered Grady a place by his side. However, Grady strode up the aisle to the Speaker's desk, grabbed the Speaker's gavel, and cried out, "In the name of the American people, I declare this House adjourned in honor of the election of the first Democratic President in twenty-five years."

Grady's conception of the New South was based on the social supremacy of whites over blacks, according to some but certainly not all. Grady stated in 1888: "the supremacy of the white race of the South must be maintained forever, and the domination of the negro race resisted at all points and at all hazards, because the white race is the superior race... [This declaration] shall run forever with the blood that feeds Anglo-Saxon hearts". [5]

On the other hand, one can find plenty of Henry Grady quotes that paint a different picture. In December 1886, he opened his famous New South speech by repeating the words of Georgia Senator Benjamin H. Hill: "There was a South of slavery and secession -- that South is dead. There is a South of Union and freedom -- that South, thank God, is living, breathing, growing every hour."

University of Massachusetts Amherst Journalism Professor Kathy Roberts Forde, sees it this way: "Grady may have united Southern and Northern whites, but he did not unite the country. Rather, he excluded black Americans from the union of North and South and the national democratic project that union represented." [6]

On December 12, 1889, he delivered a speech in Boston at Faneuil Hall, on "The Race Problem in the South". Grady was already ill, and the weather was terrible. His health worsened to the point that he barely made it back to Georgia. By the time he made it to the depot at Atlanta, he was too exhausted to appreciate the reception prepared for him and had to be shielded from the crowd and escorted home by his physician.

By December 23, he was diagnosed with pneumonia and died that day. He was buried on Christmas Day 1889, first in a friend's crypt at Oakland Cemetery because of family finances. His body was re-interred at Westview Cemetery when it opened soon afterward.

Grady County in Georgia and Oklahoma were named in his honor, [7] as was Grady, Alabama. [8] Places in Atlanta named for him include Grady Memorial Hospital, Henry W. Grady High School, the now-demolished Henry Grady Hotel, and the Henry W. Grady College of Journalism and Mass Communication at the University of Georgia. The city erected a statue in his honor in 1891, which still stands today on Marietta Street in the heart of downtown Atlanta. [9] Other places include Henry Woodfin Grady Elementary School in Tampa, FL and Henry W. Grady Middle School in Houston, TX.

In 1931 Grady was the first person inducted into the Georgia Newspaper Hall of Fame, memorialized via a bust by artist Steffen Thomas. [10] During World War II the Liberty ship SS Henry W. Grady was built in Brunswick, Georgia and named in his honor. [11]