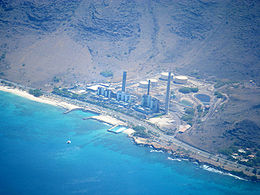 HECO, HELCO, and MECO employ more than 2,000 people. Approximately 20,000 Hawaii residents are shareholders of HECO’s parent company, Hawaiian Electric Industries. [2] The company is headquartered in Honolulu. Net income was 219 million dollars on sales of 2.874B for 2019. [3]

The island of Kauai is the only Hawaiian island not supplied by HEI. Instead, the consumer-owned Kauai Island Utility Cooperative manages that island's electricity.

Hawaiian Electric Company (often abbreviated HECO, pronounced HEE-coh) incorporated on October 13, 1891. [4] Within about 16 years the utility had 2,500 customers on Oahu. By 1914 HECO had started rural service to the windward side of the island and was marketing electric products like refrigerators and flat irons. In 1937 HECO broke ground on its second power plant, and transmission lines soon crisscrossed Oahu. [5]

Hawaii became a state in 1959, and by then Oahu was entirely electrified. HECO opened a 116 MW plant in downtown Honolulu in 1954. The state's first reheat steam turbine generator went on line at Kahe on the west coast of Oahu. Today, Kahe is the state's largest plant with a total generating capacity of 650 MW.

HECO purchased Maui Electric Company (abbreviated MECO and pronounced MEE-coh) in 1968. In 1970, HECO acquired the Hawaii Island's Hilo Electric Light Company (later renamed Hawai'i Electric Light Company, abbreviated HELCO and pronounced HEL-coh). In 1988 MECO acquired the Lanai City power plant on the island of Lana'i, and in 1989, Molokai Electric Company on the island of Moloka'i. Hawaiian Electric Industries, Inc. (HEI) was created as a holding company for these various utilities in 1983. [1] In 2013, HECO began working with Siemens to develop a self-healing grid in eastern Oahu and Waikiki to ensure a reliable electrical supply. [6]

On December 4, 2014, NextEra Energy tendered an offer to purchase HEI for $4.3 billion. The sale required approval by the Hawaii Public Utilities Commission. [7] On July 18, 2016, it was announced that the merger was cancelled after the Public Utilities Commission disapproved the deal. [8] The merger included plans to convert HEI's oil-fired generating plants to run on natural gas, which were to use liquified natural gas imported from a British Columbia plant of FortisBC. The upgrades were cancelled as they were dependent upon approval of the merger. [9]

On December 24, 2019, HECO announced that it would begin operating under a single name with its subsidiaries MECO and HELCO -- Hawaiian Electric. [10]

Through a cooperative effort with HECO, High Technology Development Corporation (HTDC), an agency of the State of Hawai’i, initiated the Hawai’i Electric Vehicle Demonstration Project (HEVDP) consortium to develop an electric vehicle industry in Hawai’i. [17] The islands had about 5,000 rechargeable vehicles as of 2017. [12]

In 2015, the Hawaii State Legislature amended the State's Renewable Portfolio Standards to establish the nation's first goal of 100% renewable energy: [18]

Hawaiian Electric has indicated in its Power Supply Improvement Plan that it will achieve these goals ahead of schedule, [19] including achieving 100% renewable electricity for the island of Moloka'i by 2020. [20] From 2021, HEI transitioned away from cost of service to Performance Based Regulation. [21] [22]