From Wikipedia, the free encyclopedia
A mostly undersea mountain range in the Pacific Ocean that reaches above sea level in Hawaii.

The Hawaiian–Emperor seamount chain is a mostly undersea mountain range in the Pacific Ocean that reaches above sea level in Hawaii. It is composed of the Hawaiian ridge, consisting of the islands of the Hawaiian chain northwest to Kure Atoll, and the Emperor Seamounts: together they form a vast underwater mountain region of islands and intervening seamounts, atolls, shallows, banks and reefs along a line trending southeast to northwest beneath the northern Pacific Ocean. The seamount chain, containing over 80 identified undersea volcanoes, stretches about 6,200 kilometres (3,900 mi) from the Aleutian Trench in the far northwest Pacific to the Loʻihi seamount, the youngest volcano in the chain, which lies about 35 kilometres (22 mi) southeast of the Island of Hawaiʻi.

The chain can be divided into three subsections. The first, the Hawaiian archipelago (also known as the Windward isles), consists of the islands comprising the U.S. state of Hawaii. As it is the closest to the hotspot, this volcanically active region is the youngest part of the chain, with ages ranging from 400,000 years [1] to 5.1 million years. [2] The island of Hawaiʻi is composed of five volcanoes, of which three ( Kilauea, Mauna Loa, and Hualalai) are still active. Haleakalā on the island of Maui is dormant. Lōʻihi Seamount continues to grow offshore of Hawaiʻi island, and is the only known volcano in the chain in the submarine pre-shield stage. [3]

The second part of the chain is composed of the Northwestern Hawaiian Islands, collectively referred to as the Leeward isles, the constituents of which are between 7.2 and 27.7 million years in age. [2] Erosion has long since overtaken volcanic activity at these islands, and most of them are atolls, atoll islands, and extinct islands. They contain many of the most northerly atolls in the world; Kure Atoll, in this group, is the northernmost atoll on Earth. [4] On June 15, 2006, U.S. President George W. Bush issued a proclamation creating Papahānaumokuākea Marine National Monument under the Antiquities Act of 1906. The national monument, meant to protect the biodiversity of the Hawaiian isles, [n 1] encompasses all of the northern isles, and is one of the largest such protected areas in the world. The proclamation limits tourism to the area, and called for a phase-out of fishing by 2011. [5]

The oldest and most heavily eroded part of the chain are the Emperor seamounts, which are 39 [6] to 85 million years in age. [7] The Emperor and Hawaiian chains form an angle of about 120°. This bend was long attributed to a relatively sudden change of 60° in the direction of plate motion, but research conducted in 2003 suggests that it was the movement of the hotspot itself that caused the bend. [8] The issue is still currently under academic debate. [9] All of the volcanoes in this part of the chain have long since subsided below sea level, becoming seamounts and guyots (see also the seamount and guyot stages of Hawaiian volcanism). Many of the volcanoes are named after former emperors of Japan. The seamount chain extends to the West Pacific, and terminates at the Kuril–Kamchatka Trench, a subduction zone at the border of Russia. [10] 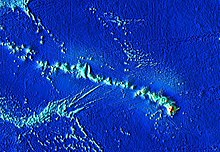 The oldest age for the Emperor Seamounts is 81 million years, and comes from Detroit Seamount. However, Meiji Guyot, located to the north of Detroit Seamount, is likely somewhat older.

In 1963, geologist John Tuzo Wilson hypothesized the origins of the Hawaiian–Emperor seamount chain, explaining that they were created by a hotspot of volcanic activity that was essentially stationary as the Pacific tectonic plate drifted in a northwesterly direction, leaving a trail of increasingly eroded volcanic islands and seamounts in its wake. An otherwise inexplicable kink in the chain marks a shift in the movement of the Pacific plate some 47 million years ago, from a northward to a more northwesterly direction, and the kink has been presented in geology texts as an example of how a tectonic plate can shift direction comparatively suddenly. A look at the USGS map on the origin of the Hawaiian Islands [11] clearly shows this "spearpoint".

In a more recent study, Sharp and Clague (2006) interpret the bend as starting at about 50 million years ago. They also conclude that the bend formed from a "traditional" cause—a change in the direction of motion of the Pacific plate.

However, recent research shows that the hotspot itself may have moved with time. Some evidence comes from analysis of the orientation of the ancient magnetic field preserved by magnetite in ancient lava flows sampled at four seamounts (Tarduno et al., 2003): this evidence from paleomagnetism shows a more complex history than the commonly accepted view of a stationary hotspot. If the hotspot had remained above a fixed mantle plume during the past 80 million years, the latitude as recorded by the orientation of the ancient magnetic field preserved by magnetite (paleolatitude) should be constant for each sample; this should also signify original cooling at the same latitude as the current location of the Hawaiian hotspot. Instead of remaining constant, the paleolatitudes of the Emperor Seamounts show a change from north to south, with decreasing age. The paleomagnetic data from the seamounts of the Emperor chain suggest motion of the Hawaiian hotspot in Earth's mantle. Tarduno et al. (2009) have summarized evidence that the bend in the seamount chain may be caused by circulation patterns in the flowing solid mantle (mantle "wind") rather than a change in plate motion.

The chain has been produced by the movement of the ocean crust over the Hawaiʻi hotspot, an upwelling of hot rock from the Earth's mantle. As the oceanic crust moves the volcanoes farther away from their source of magma, their eruptions become less frequent and less powerful until they eventually cease to erupt altogether. At that point erosion of the volcano and subsidence of the seafloor cause the volcano to gradually diminish. As the volcano sinks and erodes, it first becomes an atoll island and then an atoll. Further subsidence causes the volcano to sink below the sea surface, becoming a seamount and/or a guyot. [3]