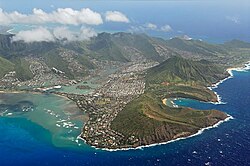 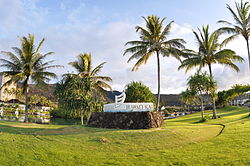 Maunalua (Hawaii Kai) is a largely residential area located in the City & County of Honolulu, in the East Honolulu CDP on the island of Oʻahu. Maunalua, (Hawaii Kai) is the largest of several communities at the eastern end of the island. The area was largely developed by Henry J. Kaiser around the ancient Maunalua fishpond and wetlands area known as Kuapā (meaning "fishpond wall"). The Hawaiʻi Kai or Koko Marina was dredged from Kuapā Pond starting around 1959. Dredging not only transformed the shallow coastal inlet and wetlands into a marine embayment, but was accompanied by considerable filling and clearing of the pond margins. In 1961, Kaiser-Aetna entered into a lease agreement with the land owner, the Bernice Pauahi Bishop Estate, to develop the 521 acre (2.11 km2) fishpond into residential tracts with a marina and channels separated by fingers of land and islands upon which house lots and commercial properties would be laid out and developed. [1] Nearly all of the low-lying lands surrounding the marina have since been developed, and neighborhoods now extend back into the several valleys and up the separating ridges.

Immediately west of Maunalua (Hawaii Kai) along Kalanianaʻole Highway (State Rte. 72) is the East Honolulu neighborhood of Kuliʻouʻou. Eastward from Hawaiʻi Kai (Maunalua) on the same highway is the Koko Head area, an area now mostly included within Koko Head Park. South of Hawaii Kai is Maunalua Bay, and north are the Koʻolau mountains. Eventually the road crosses over to the windward side near Makapuʻu Point.

Kalama Valley is a community within the town of Maunalua, more commonly known as Hawaiʻi Kai located on the eastern coast of the island of Oʻahu. It features a shopping center, a public park and basketball facilities, and predominantly single-family, relatively high-priced housing, due to its location in Maunalua (Hawaiʻi Kai). There are a variety of attractions in the vicinity of Kalama Valley, including Hawaii Kai Golf Course, Awawamalu ( Sandy Beach), Makapuʻu Lighthouse and beach, Koko Crater Botanical Garden, the "From Here to Eternity" cove, and Hanauma Bay.

"Kamehame Ridge" is a ridge located in the middle of Kalama and Kamilo Iki Valley. Kamehame Ridge was developed during the 1990s. [2] Now there are multi-million dollars homes and real estate stretching from the bottom to the top of the Ridge. [3] It is most famous for its popular hike, known locally as “Dead Man’s Catwalk”. [4]