Harris Corporation was an American technology company, defense contractor, and information technology services provider that produced wireless equipment, tactical radios, electronic systems, night vision equipment and both terrestrial and spaceborne antennas for use in the government, defense and commercial sectors. They specialized in surveillance solutions, [2] microwave weaponry, [3] and electronic warfare. [4] In 2019, it merged with L3 Technologies to form L3Harris Technologies.

Headquartered in Melbourne, Florida, the company had approximately $7 billion of annual revenue. It was the largest private-sector employer in Brevard County, Florida (approximately 6,000). [5] The company was the parent of Intersil (Harris Semiconductor).

In 2016, Harris was named one of the top hundred federal contractors by Defense News. [6] In January 2015, Wired Magazine ranked Harris Corporation—tied with U.S. Marshals Service—as the number two threat to privacy and communications on the Internet. [7] 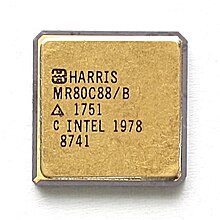 The "Harris Automatic Press Company" was founded by Alfred S. Harris in Niles, Ohio, in 1895. The company spent the next 60 years developing lithographic processes and printing presses before acquiring typesetting company Intertype Corporation.

In 1957, Harris acquired Gates Radio, a producer of broadcast transmitters and associated electronics gear, but kept the Gates brand name alive by putting the Gates sticker on the back of numerous transmitters that were labeled Harris on the front panels.

The same year, they acquired Intertype Corporation, a type foundry based in Brooklyn, New York. [8]

In 1967, they merged with Radiation, Inc. of Melbourne, Florida, a developer of antenna, integrated circuit and modem technology used in the space race. The company headquarters was moved from Cleveland to Melbourne in 1978.[ citation needed]

In 1979, Harris formed a semiconductor joint venture Matra Harris Semiconductors (MHS), from which Harris withdrew in 1989. After further changes MHS was taken over by Atmel. [9]

In 1996, Harris Corporation formed a joint venture with Shenzhen Telecom Company to produce and sell Harris' digital microwave radios and integrate them with other systems.[ citation needed][ clarification needed]

In 1999, Harris spun off their remaining semiconductor business as an independent company, under the Intersil name.

Harris Corporation developed a Hand Held Computer for use during the address canvassing portion of the 2010 United States Census. [11] Secured access via a fingerprint swipe guaranteed that only the verified user had access to the unit. A GPS capacity was integral to the daily address management and the transfer of information that was gathered. Of major importance was the security and integrity of the personal and private information of the populace.

In January 2011, Harris re-opened its Calgary, Alberta avionics operation, Harris Canada Inc.. The expanded facility's operations include among others the support of the work to be completed under the company's six-year, $273 million (CAD) services contract with the Government of Canada for the CF-18 Avionics Optimized Weapon System Support (OWSS) program. [12]

In December 2012, Harris Corporation sold its broadcast equipment operations to the Gores Group which operated as Harris Broadcast [13] and is now GatesAir. Harris received $225M for the transaction, exactly half of what it paid seven years earlier for Leitch Technology, its final acquisition for the Broadcast division. [14]

On May 29, 2015, the purchase of competitor Exelis Inc. was finalized, almost doubling the size of the original company. [15]

In January 2017, Harris sold off its government IT services division to Veritas Capital for $690 million. [17]

In October 2018 Harris announced an all-stock "merger of equals" with New York-based L3 Technologies, to be closed (subject to approvals) in mid-2019. The new company, tentatively called L3 Harris Technologies, Inc., will be based in Melbourne, Florida, where Harris is currently headquartered. [18]

Harris Corporation produced multiple cell-site simulator products, such as the StingRay and Hailstorm phone trackers (see table below); These masquerade as legitimate cellphone towers duping mobile devices to connect to them instead of real cellular networks, so all wireless voice and data traffic originating in a given area are intercepted by the systems, enabling Stingray operators to conduct mass surveillance and triangulate the position of mobile devices. [25] [26]

Originally developed for the U.S. Navy and later used in the global " war on terror" outside the US, they've increasingly been used by US police agencies. [27] More than six U.S. federal agencies use these platforms, including the FBI, Drug Enforcement Administration and Immigration and Customs Enforcement. The American Civil Liberties Union (ACLU) says at least 53 law enforcement agencies in 21 states, use this or similar devices. [28]

These platforms are controversial [29] [30] as they surveil communications of all mobile devices in their vicinity, including those of individuals not suspected of any crimes. [31] [32] Harris have been criticized by civil rights advocates for requiring local municipalities, police and state governments to enter into non-disclosure agreements (NDA) [33] and to conceal usage of these platforms from citizens and the courts. [34] [35] Such NDA may violate public record and open access laws. The ACLU, Electronic Privacy Information Center (EPIC), Electronic Frontier Foundation (EFF) filed two successful civil lawsuits over denied Freedom of Information Act (FOIA) requests and violations of the public records laws of Florida. [36] [37] [38]

In September 2014, as a result of successful litigation, ACLU received documents and emails between Harris Corporation and the Federal Communications Commission relating to FCC approval of Harris' surveillance systems. [39] ACLU then sent a letter to FCC stating, in their view, Harris misled FCC Office of Engineering and Technology staff during the regulatory review process by falsely claiming the systems were only used in emergency situations and not criminal investigations. [40]

In 2006, Harris employees directly conducted wireless surveillance using StingRay units on behalf of the Palm Bay Police Department—where Harris has a campus [41]—in response to a bomb threat against a middle school. The search was conducted without a warrant or judicial oversight. [42] [43] [44] [45]

In 2015, Santa Clara County withdrew from contract negotiations with Harris for StingRay units, noting the reason was the onerous restrictions imposed by Harris on what could be released under public records requests. [46]