From Wikipedia, the free encyclopedia
2,500 acres at confluence of Virginia, West Virginia and Maryland (US) managed by the National Park Service

Harpers Ferry National Historical Park is located at the confluence of the Potomac and Shenandoah rivers in and around Harpers Ferry, West Virginia. The park includes land in the Shenandoah Valley in Jefferson County, West Virginia; Washington County, Maryland and Loudoun County, Virginia. The park is managed by the National Park Service, an agency of the U.S. Department of the Interior. Originally designated Harpers Ferry National Monument in 1944, the park was declared a National Historical Park by the U.S. Congress in 1963. The park includes the historic town of Harpers Ferry, notable as a center of 19th-century industry and as the scene of John Brown's failed abolitionist uprising. Consisting of almost 4,000 acres (16 km2), it includes the site of which Thomas Jefferson once wrote, "The passage of the Potomac through the Blue Ridge is perhaps one of the most stupendous scenes in Nature" after visiting the area in 1783. [3] Due to a mixture of historical events and ample recreational opportunities, all within 50 miles (80 km) of Washington, D.C., the park was listed on the National Register of Historic Places on October 15, 1966. The Park's Superintendent is presently Tyrone Brandyburg. [4]

The park was originally planned as a memorial to John Brown, responsible for what is by far the most famous incident in Harpers Ferry's history, his 1859 raid and capture of the federal armory. NPS officials in the 1930s focused on John Brown's raid and the Civil War to justify acquiring parts of Harpers Ferry for a historical and military park. Like the figure of John Brown himself, this proved enormously controversial, with opposition from the United Daughters of the Confederacy and the Sons of Confederate Veterans. [5]:86 Today (2018) there is no mention of John Brown on the Park's home page ( http://www.nps.gov/hafe), although the raid is covered in the history section of the website.

Native American history in the region dates back to at least 8,000 years ago. The Tuscarora people were the last of the native peoples known to inhabit the area in large numbers, essentially vanishing in the early 18th century. One of these European immigrants, Robert Harper, obtained a patent for the land from the Virginia legislature in 1751. Note that prior to 1863, West Virginia was still a part of Virginia. The town was originally known as Shenandoah Falls at Mr. Harper's Ferry (1763) due to the ferry business Robert Harper managed and operated.

Today, the original house built by Robert Harper is the oldest remaining structure in the lower part of the park. George Washington visited the area during his trip to the rivers' confluence in 1785, searching for a waterway to ship goods westward. Later, Washington began the construction of the federal Harpers Ferry Armory on the site, utilizing waterpower from the rivers for manufacturing purposes.

Meriwether Lewis, under government contract, procured most of the weaponry and associated hardware that would be needed for the Lewis and Clark Expedition at the armory in Harpers Ferry. Blacksmiths also built a collapsible iron boat frame for the expedition. Between the years 1820 to 1840, John H. Hall worked to perfect the manufacturing of interchangeable parts at the armory.[ citation needed] Utilizing precision molds and jigs, this was one of the birthplaces of precision manufacturing so that armaments and related mechanical equipment could be standardized and parts would be interchangeable. Subsequently, the development of the modern bullet to replace the round lead slug was achieved by James H. Burton and this improvement was adopted by the U.S. Army in 1855. Employing at times up to 400 workers, the armory produced over half a million muskets and rifles between 1801 and 1860.

Abolitionist John Brown led an armed group in the capture of the armory in 1859. Brown had hoped he would be able to arm the slaves and lead them against U.S. forces in a rebellion to overthrow slavery. After his capture in the armory by a group of Marines (led by U.S. Army Colonel Robert E. Lee), Brown was hanged, predicting in his last words that civil war was looming on the horizon, a prediction that came true less than two years later. The most important building remaining from John Brown's raid is the firehouse, now called John Brown's Fort, where he resisted the Marines.

The American Civil War (1861–1865) found Harpers Ferry right on the boundary between the Union and Confederate forces. The strategic position along this border and the valuable manufacturing base was a coveted strategic goal for both sides, but particularly the South due to its lack of manufacturing centers. Consequently, the town exchanged hands no less than eight times during the course of the war. Union forces abandoned the town immediately after the state of Virginia seceded from the Union, burning the armory and seizing 15,000 rifles. Colonel Thomas J. Jackson, who would later become known as "Stonewall", secured the region for the Confederates a week later and shipped most of the manufacturing implements south. Jackson spent the next two months preparing his troops and building fortifications, but was ordered to withdraw south and east to assist P.G.T. Beauregard at the First Battle of Bull Run. Union troops returned in force, occupying the town and began to rebuild parts of the armory. Stonewall Jackson, now a major general, returned in September 1862 under orders from Robert E. Lee to retake the arsenal and then to join Lee's army north in Maryland. Jackson's assault on the Federal forces there, during the Battle of Harpers Ferry led to the capitulation of 12,500 Union troops, which was the largest number of Union prisoners taken at one time during the war. The town exchanged hands several more times over the next two years.

Storer College was built in Harpers Ferry as one of the first integrated schools in the U.S. [6] Frederick Douglass served as a trustee of the college, and delivered a memorable oration on the subject of John Brown there in 1881. Subsequent rulings known as Jim Crow Laws led other African American leaders such as Dr. W. E. B. Du Bois to hold the second Niagara Movement (an early form of the NAACP) conference at the school in 1906 to discuss ways to peacefully combat legalized discrimination and segregation. After the end of school segregation in 1954, Storer College closed the following year. What remains of the Storer College campus is now administered by the National Park Service, as part of Harpers Ferry National Historical Park, Harpers Ferry Center, and the Stephen T. Mather Training Center. [7]

Several historical museums now occupy restored 19th century buildings in the Lower Town Historic District of Harpers Ferry. Nearly half a million people visit the park each year. [8] (In comparison, 15 million people visit Washington, DC, each year. [9]) North of the park and across the Potomac from Harpers Ferry is the Chesapeake and Ohio Canal National Historical Park. The canal, which operated from 1828 to 1924, provided a vital waterway link with areas up and downstream prior to and during the early years after the arrival of the railroad. Today, the canal towpath and park, which provide access to the Maryland Heights section of the Harpers Ferry N.H.P., can be accessed by foot from Harpers Ferry via a footbridge constructed by the National Park Service alongside tracks on the railroad bridge over the Potomac, or via car by traveling east from Harpers Ferry on U.S. Route 340 to access points near Sandy Hook, Maryland. Aside from the extensive historical interests of the park, recreational opportunities include fishing, boating, and whitewater rafting as well as hiking, with the Appalachian Trail passing right through the park. The park adjoins the Harpers Ferry Historic District, as well as two other National Register of Historic Places locations: St. Peter's Roman Catholic Church and the B & O Railroad Potomac River Crossing.

On June 6, 2016, the Harpers Ferry National Historical Park was featured on the third 2016 release of the America the Beautiful Quarters series. In the middle of the quarter is a depiction of John Brown's Fort, while the outside has the year (2016), location (Harpers Ferry), and the state (West Virginia). This specific coin is the 33rd park quarter to be released in the America the Beautiful Park Quarter series.

The Civil War Trust (a division of the American Battlefield Trust) and its partners have acquired and preserved 542 acres (2.19 km2) of the battlefield in nine acquisitions. [10] Most of that land has been sold or conveyed to the National Park Service and incorporated into the park. 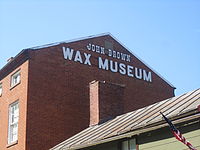 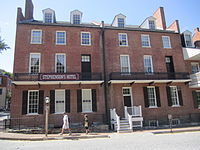 The Lower Town points of interest are clustered where the Shenandoah River meets the Potomac River, and run along Shenandoah Street, Potomac Street and High Street.