From Wikipedia, the free encyclopedia
Species of bird
This article is about the species of wild sea duck. For the domestic duck breed, see Welsh harlequin.

A pair of males flanked by a pair of females

Adult breeding males have a colorful and complex plumage pattern. The head and neck are dark slate blue with a large white crescent marking in front of the eye, a small round dot behind the eye, and a larger oval spot down the side of the neck. A black crown stripe runs over the top of the head, with chestnut patches on either side. A black-bordered white collar separates the head from the breast. The body is largely a lighter slate blue with chestnut sides. A black-bordered white bar divides the breast vertically from the sides. The tail is black, long and pointed. The speculum is metallic blue. The inner secondary feathers are white and form white markings over the back when folded. The bill is blue-grey and the eye is reddish. Adult females are less colourful, with brownish-grey plumage with three white patches on the head: a round spot behind the eye, a larger patch from the eye to the bill and a small spot above the eye. [3] 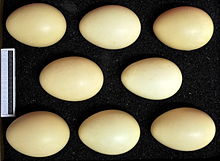 Their breeding habitat is cold fast moving streams in north-western and north-eastern North America, Greenland, Iceland and eastern Russia. The nest is usually located in a well-concealed location on the ground near a stream. They are usually found near pounding surf and white water. They are short distance migrants and most winter near rocky shorelines on the Atlantic and Pacific coasts. They are very rare migrants to western Europe.

The eastern North American population is declining and is considered endangered. Possible causes include loss of habitat due to hydroelectric projects and loss of life due to oil spills near coastal areas.

These birds feed by swimming under water or diving. They also dabble. They eat molluscs, crustaceans and insects. Harlequins have smooth, densely packed feathers that trap a lot of air within them. This is vital for insulating such small bodies against the chilly waters they ply. It also makes them exceptionally buoyant, making them bounce like corks after dives.

Harlequin ducks adhere to a monogamous mating system, during their winter mating season with form multi-year pair bonds, though the males rarely participate in paternal care. Young ducks begin courtship in their first winter, females will find success by the second year, yet the males will rarely form a persistent bond before their fourth winter. Harlequin males will have an alternate plumage during this winter mating season.

Both female and male harlequins exercise mate-choice preference and pair-bond defense, to demonstrate fidelity to their partner. Either partner is able to divorce the pair-bond to pursue a higher-quality option, however this behavior is uncommon. [5]

Today, this is the only species of its genus. Two prehistoric harlequin ducks were described from fossils, although both were initially placed in a distinct genus: Histrionicus shotwelli is known from Middle to Late Miocene deposits of Oregon, United States and was considered to form a distinct monotypic genus, Ocyplonessa. Histrionicus ceruttii, which lived in California during the Late Pliocene, was at first taken to be a species of the related genus Melanitta. The species is traditionally considered monotypic. The Eastern and Western populations are sometimes recognized as two different subspecies, the Eastern race being the nominate H. histrionicus histrionicus, and the Western race as H. h. pacificus, but there has been doubt on the validity of this taxon.