From Wikipedia, the free encyclopedia
This article is about the HOPE Scholarship in Georgia. For the national tax credit, see Hope Scholarship Credit.

The HOPE Program (Helping Outstanding Pupils Educationally) created in 1993 under the supervision of Georgia Governor Zell Miller, is Georgia's scholarship and grant program that rewards students with financial assistance in degree, diploma, and certificate programs at eligible Georgia public and private colleges and universities, and public technical colleges. [1] HOPE is funded entirely by revenue from the Georgia Lottery and is administered by the Georgia Student Finance Commission (GSFC). Students can benefit from HOPE in several ways. 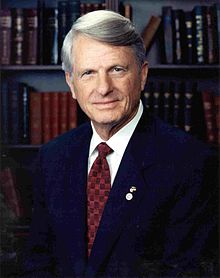 The program is entirely merit-based, meaning that a person's eligibility for the scholarship is based on their academic achievement in high school or college. Previously, traditional-college-age students whose family income exceeded $100,000 per year were disqualified from the program.

To receive HOPE Scholarship funding, students must meet one of the following academic requirements: [4]

And all of the following other requirements.

The Hope Scholarship regulations and requirements are codified in Georgia law and has undergone a number of changes by the Georgia Legislature. [5]

There is also another scholarship within HOPE called the Zell Miller Scholarship. In order to qualify for this scholarship, a student must meet all of the requirements of the HOPE Scholarship. A student must also graduate with a 3.7 High School HOPE GPA and must have a score of 1200 (CR+M) on a single administration of the SAT or a 26 ACT Composite and must maintain a college cumulative GPA of a 3.3. This Scholarship will pay for 100% of tuition, including $4,000 at private colleges. Books and mandatory fees have also been eliminated.

In 2005, a decrease in lottery revenue led to questions about whether sufficient funding would be available to continue offering the scholarship in its present form. Several suggestions were made to decrease the program's costs, including tying the scholarship to standardized test scores or checking students' college GPAs more frequently to avoid paying tuition for students who had dipped below 3.0. Political rivals of Governor Sonny Perdue criticized his management of the program, and HOPE's future became an important state political issue. Much of that year's debate was rendered moot when lottery sales increased the next year.

January 14, 1991: Zell Miller is inaugurated as Georgia's 79th governor. He introduces legislation before the General Assembly to establish a lottery. A statewide referendum must be passed to amend the Georgia Constitution to allow a lottery.

January 31, 1991: Resolution to put lottery amendment before voters passes the Georgia House 126-51 and is adopted by a 47-9 vote of the Georgia Senate.

July 1, 1994: HOPE makes its first expansion to cover four rather than two years of tuition. In addition, mandatory fees and a $100 per quarter book allowance will be paid for the first time.

July 11, 1995: President Clinton models his America's Hope program, a tax credit for the cost of two year of education beyond high school, after the success of Georgia's HOPE Program.

July 1, 1996: Private college students for the first time must earn and maintain a B average to receive HOPE. As a result, the previous $1,500 grant is changed to a $3000 scholarship.

November 3, 1996: Entering freshmen high school students (Class of 2000) must now earn a B average in the core curriculum courses of English, math, social studies, foreign language and science to receive the HOPE Scholarship upon graduation.

July 1, 1997: Nontraditional student may now qualify for HOPE after their freshman or sophomore years.

November 18, 1997: The Georgia Student Finance Commission adopts a policy to allow home school students who maintain a B average during their first year in college to retroactively qualify for a HOPE Scholarship during the 1997-1998 school year.

April 1998: The National Association of State Student Grant and Aid Programs (NASSGAP) releases a study that says Georgia is ranked Number One among the 50 states in academic-based student financial aid because of the HOPE Scholarship.

June 29, 1998: The Council on School Performance releases a study that concludes: "We found that recipients of Georgia's HOPE Scholarship are more likely to remain enrolled in college, have higher college grade point averages and have earned more credit hours than students without the scholarship."

May 17, 1999: For the second year in a row, the National Association of State Student Grant and Aid Programs ranked Georgia Number One among 50 states in academic-based student financial aid because of the HOPE Scholarship.

March 2000: For the third year in a row, the National Association of State Student Grant and Aid Programs ranked Georgia Number One among 50 states in academic-based student financial aid because of the HOPE Scholarship.

July 1, 2000: Students can receive the full benefits of Georgia's HOPE Scholarship and the federal Pell Grant making a college education for Georgia students even more affordable.

October 2000: Seven years after its inception, the HOPE Scholarship has more than 500,000 awards totaling $1 billion.

March 2001: For the fourth year in a row, the National Association of State Student Grant and Aid Programs ranked Georgia Number One among 50 states in academic-based student financial aid because of the HOPE Scholarship.

April 2002: HOPE reaches new milestones: More than 600,000 students have received HOPE awards totaling more than $1.5 billion. Also, thanks to HOPE, for the fifth year in a row Georgia leads the nation in providing academic-based financial aid.

March 2003: The Georgia General Assembly created the Improvement of the HOPE Scholarship Joint Study Commission. The purpose of the Commission was to identify and recommend actions to ensure adequate funding of the HOPE program for years to come.

April 2003: For the sixth year in a row, the National Association of State Student Grant and Aid Programs ranked Georgia Number One among 50 states in academic-based student financial aid because of the HOPE Scholarship.

January 2004: After meeting throughout the latter half of 2003, the HOPE Study Commission made its recommendations in January 2004.

May 2004: House Bill 1325 was signed into law, creating the most significant changes in the HOPE program since its beginning.

March 2011: Georgia Governor Nathan Deal, together with state legislative leaders, pushed a new law into effect, raising the GPA requirements for HOPE and eliminating payments for books and mandatory fees. The new HOPE Scholarship, or HOPE Lite, will now be based on Lottery revenue. The new scholarship within HOPE, the Zell Miller Scholarship, will cover 100% of tuition for those students who graduate with a 3.7 HOPE GPA and receive a score of 1200 (CR+M) on the SAT or a 26 ACT Composite at public colleges ($4,000 at private colleges), and maintain a 3.3 GPA while in college. Books and fees have also been eliminated for this scholarship as well. These changes also added additional academic rigor requirements to take effect in stages starting in 2015 and going through 2017. These requirements define the type and number of specific core academic courses required for graduation eligibility for the Hope Scholarship, including raising the required GPA for students to be eligible for the HOPE Grant to 3.0. [7] Although these changes have taken some of the strain off of Georgia's finances, it has also resulted in about 1/4th of all Technical College students dropping out of college and increases in the accrued debt of those who remained. [8]

March 2013: State Representative Stacey Evans introduces House Bill 54 to reverse some of the changes to the HOPE Scholarship program and, she claimed, help more Georgia students realize their dream and the original purpose of the HOPE program. [9] Her ideas were incorporated into House Bill 372 which lowered the required GPA for HOPE Grants (the HOPE Scholarship for Technical Schools) back to the original 2.0 and bringing back 5,000 students into Technical College in the first year alone. [10]

The money provided to HOPE Scholars varies and depends on the type of institution as well as the student's specific enrollment. [4]

To apply for the HOPE Scholarship, students must follow the registration demands of the school they chose.

Students planning to attend a public college, university, or technical college have two options for applying for the HOPE Scholarship.

Non Traditional Students were not grandfathered in with the 2011 Changes. [11] This has led to allegations of age discrimination [12] because students who had not received the grant before Summer 2011 and had graduated from high school more than seven years past were disqualified based on a new "seven year" criteria [13] [14] [15] that has in subsequent years been modified. Critics were with Governor Nathan Deal and the sponsors of the bill that caused this change.[ citation needed]

Similar scholarship lotteries in other states