From Wikipedia, the free encyclopedia
For other uses, see Grey Nuns (disambiguation).

Grey Nuns Convent in Montreal (circa 1880)

The congregation was founded when Marguerite d'Youville and three of her friends formed a religious association to care for the poor. They rented a small house in Montreal on 30 October 1738, taking in a small number of destitute persons. On 3 June 1753 the society received royal sanction, which also transferred to them the rights and privileges previously granted by letters patent in 1694 to the Frères Hospitaliers de la Croix et de Saint-Joseph, known after their founder as the Frères Charon. At that time they also took over the work of the bankrupt Frères Charon at the Hôpital Général de Montréal located outside the city walls. (In the seventeenth century, a "general hospital" was an institution that took in old people, the ill, and the poor. Medical care was dispensed at the Hôtel Dieu.) [2]

In 1755 the sisters cared for those stricken during a smallpox epidemic. As the sisters were not cloistered, they could go out to visit the sick. Those assisted included the First Nations people in Oka, who were among the benefactors who later helped rebuild the Hospital after a fire in 1765. [2]

After 1840, the order rapidly expanded, and over the next 100 years became a major provider of health care and other social services throughout Quebec, Western and Northern Canada, and the northern United States. [3] In 1855, the Grey Nuns were called to Toledo, Ohio, to care for many suffering from cholera. [4] St. Vincent's later became part of Catholic Health Partners.

St. Joseph Hospital was founded in 1906 in Nashua, by the parish of St. Louis de Gonzague primarily to serve Nashua's French Canadian community. The Sisters of Charity of Montreal began to staff it in 1907. The hospital was dedicated on May 1, 1908, [5] the Feast of St. Joseph the Worker. The sister also started a nursing school. In 1938, the parish transferred ownership to the "Grey Nuns". [6]

The city residents mocked the nuns by calling them "les grises" – a phrase meaning both "the grey women" and "the drunken women", in reference to the color of their attire and d'Youville's late husband, François-Magdeleine You d’Youville (1700–1730), a notorious bootlegger. Marguerite d'Youville and her colleagues adopted the particular black and beige dress of their religious institute in 1755: despite a lack of grey colour, they kept the nickname. [8] When a Grey Nun worked as a nurse in a hospital, she usually exchanged her taupe habit for a white one. [9] They wore a bonnet instead of a veil, as that was more practical for everyday work. [2]

The rule given to Marguerite d'Youville and her companions by the Sulpician priest, Father Louis Normant de Faradon, P.S.S, in 1745 received episcopal sanction in 1754, when Monseigneur de Pontbriant formed the society into an official religious community. This rule forms the basis of the present constitution, which was approved by Pope Leo XIII on 30 July 1880. Besides the three vows of poverty, chastity, and obedience, the sisters pledge themselves to devote their lives to the service of suffering humanity. 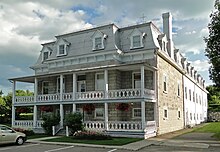 Convent of Deschambault, held by Sisters of Charity of Quebec between 1861 and 1994

The sisters undertook the first mission by a female religious institute to Western Canada in 1844, when a colony of Grey Nuns left their convent in Montreal and travelled to Saint Boniface, on the shore of the Red River. [10] Several sister communities branched off from the Sisters of Charity of Montreal:

Sisters of Charity of Saint-Hyacinthe

The congregation was founded by Marie-Michel-Archange Thuot (Mother Thuot). She joined the Grey nuns in 1803. She served in the infirmary and pharmacy, and later became mistress of novices. In 1840, Thuot and three other sisters left Montreal to establish a community in the rural farming community of Saint-Hyacinthe, Quebec, [11] and soon founded the Hotel-Dieu for their health care ministry. As a way to raise funds to support themselves and their ministry, they also took in female pensionnaires. [12]

In response to increased industrialization of the area, in 1864 they founded the workhouse of Saint Geneviève to " procure work for the poor women when they are unable to find any on the outside." [9] The workhouse produced woollen fabric and soap, and provided employment for ten women, fifteen girls, one man, and three boys. In 1888 the sisters founded the first hospital in Lewiston, Maine. They became a separate pontifical congregation in 1896.

Grey Nuns of the Sacred Heart

The only American congregation of Grey Nuns, the Grey Nuns of the Sacred Heart branched off from the Ottawa congregation in 1921, to establish an independent English-speaking congregation to minister in the United States. They founded D'Youville College in Buffalo, New York. In 1966, the mother house moved to Yardley, Pennsylvania. The sisters serve in a variety of ministries in the East Coast states New York, Pennsylvania and Massachusetts as well as in Georgia and Alaska. 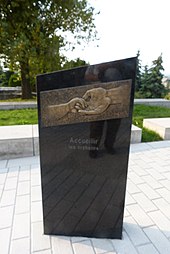 They once operated a number of major hospitals in Canada; as provincial governments and church, authorities moved to standardize both ownership and operation of hospitals, many of these hospitals passed into the hands of Church corporations (or, in some cases, governmental organizations) and the Grey Nuns changed focus. The Grey Nuns' Hospital building built in 1765 in Montreal was designated a national Historic Site of Canada in 1973 to commemorate the Grey Nuns. [15] In 2011, Grey Nuns Motherhouse, the former motherhouse of the Grey Nuns in Montreal, now part of Concordia University, was also designated a National Historic Site. [16]

They now operate shelters for battered women (with and without children), shelters for women in need, clothing and food dispensaries, centres for the disabled, and some health care facilities. St. Boniface General Hospital in Winnipeg is still owned by the Grey Nuns; hospitals previously owned, operated, or enlarged by the institute include the former Holy Cross Hospital in Calgary, [17] St. Paul's Hospital in Saskatoon, [18] and the Grey Nuns Community Hospital in Edmonton. [19] Many of these health care institutions were founded by missionary nuns sent out from convents in Quebec and Ontario. [19]

Grey Nuns may work with the incarcerated. [14] Some chapters are also dedicated to peace and justice; at least one chapter, the Grey Nuns of the Sacred Heart, has declared its properties a nuclear-free zone. [20]

Although the institute's informal name contains the word "nuns", members are actually classified by the Roman Catholic Church as religious sisters, as they are not cloistered and belong to a congregation, not an order. They no longer wear their distinctive habit and now wear street clothes. [14]

In 1993 it was estimated that there were just under 3,000 Grey Nuns in Canada, mainly in Quebec and Ontario. [10] By 2013 they will vacate their Mother House in downtown Montreal, after having sold the property to Concordia University in 2005. [21] As of 2014 there were about 136 nuns in the Montreal congregation, whose average age was around 85. [3] The Quebec congregation has not recruited any new members since before 2000. Sister Bernadette said the nuns' legacy will live on in other ways. [22]