From Wikipedia, the free encyclopedia
Metropolitan region in the United States

Greater Hartford is a region located in the U.S. state of Connecticut, centered on the state's capital of Hartford. It represents the only combined statistical area in Connecticut defined by a city within the state, being bordered by the Greater Boston region to the northeast and New York metropolitan area to the south and west. [1] Sitting at the southern end of the Metacomet Ridge, its geology is characterized by land of a level grade along the shores of Connecticut River Valley, with finer-grained soil than other regions in the state.

Hartford's role as a focal point for the American insurance industry is known nationally. The vibrant music and arts scene defines the region's culture. The region's economy is closely tied with Springfield, Massachusetts,[ citation needed] as Hartford and Springfield are twin cities,[ citation needed] only 25 miles apart. The area is served by Bradley International Airport as well as the smaller Hartford-Brainard Airport.

New England City and Town Areas (NECTA) are cluster of cities and towns throughout all of New England defined by the Office of Management and Budget. The Hartford-East Hartford-Middletown, CT Metropolitan NECTA consists of 54 towns, including 25 in Hartford County, 5 in Litchfield County, 6 in Middlesex County, 2 in New London County, 12 in Tolland County, and 4 in Windham County.

The United States Census Bureau also defines the Hartford–East Hartford–Middletown, CT Metropolitan Statistical Area (MSA) based on towns as building blocks. The area contains 54 towns of Hartford County, Tolland County, and Middlesex County. [3] The 2015 population estimate for the MSA is 1,211,324 [4] and is ranked as the 47th largest metropolitan area by population in the United States. The MSA definition of the area contains a significant portion of the Lower Connecticut River Valley, which is not commonly considered as part of Greater Hartford.[ citation needed]

Municipalities with 100,000 or more inhabitants

Municipalities with fewer than 1,000 inhabitants

The Aetna headquarters in Hartford

Notable companies based in surrounding towns 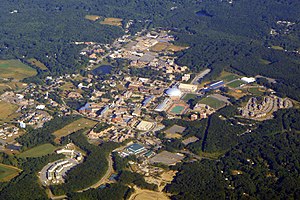 Public, two-year community colleges in the area include: [28]

Private, nonprofit, four-year universities in the area include: [30] 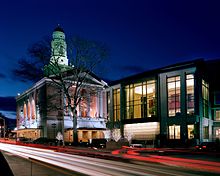 The Bushnell Center for the Performing Arts at night

The Bushnell Center for the Performing Arts is one of the largest indoor performing arts venues in the area. It houses two theaters within the complex: the 2,800-seat Mortensen Hall and the 906-seat Belding Theater, and is home to the Hartford Symphony Orchestra, the premiere orchestra in Connecticut. Other theaters in the area include the Hartford Stage and TheatreWorks.

The area is also home to the Xfinity Theatre, a 7,500-seat open-air amphitheater. The lawn outside the theater is capable of holding roughly 22,500 people, bringing total capacity to around 30,000 people.

The New England Air Museum in Windsor Locks also hosts many events, with three large hangars available for use. One of the more popular events held there is FlightSimCon.

In addition, AOPA has held their annual aviation summit in Hartford. [33]

Wadsworth Atheneum in the wintertime

Greater Hartford is home to multiple minor league professional sports teams and college teams. There are currently no major league professional sports teams. However, it was home to the Hartford Whalers ice hockey team from 1974 to 1997. The Whalers came to Hartford playing in the World Hockey Association, until they were admitted to the National Hockey League in 1979. In 1997, the team relocated to North Carolina, where they were renamed the Carolina Hurricanes.

Throughout the mid-1990s, the New England Patriots were negotiating with the state of Connecticut for a brand new football stadium located in downtown Hartford to replace the aging Foxboro Stadium where they played. The team eventually agreed to another proposal that saw the construction of Gillette Stadium. With the Patriots no longer in the equation, the state instead decided to construct a smaller football stadium on the former United Technologies-owned airfield in East Hartford. Pratt & Whitney Stadium at Rentschler Field seats approximately 40,000 spectators and is home to the Connecticut Huskies football team.

Entrance to the Westfarms Mall 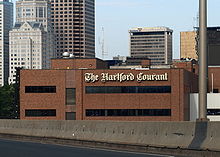 Headquarters of the Hartford Courant

Major shopping centers in the area include:

The Hartford Courant is the daily broadsheet newspaper serving the Greater Hartford area. Founded in 1764 as the Connecticut Courant, it is generally considered to be the oldest continually published newspaper in the United States. It is owned by Tribune Publishing.

From 1817 to 1976, the area was also served by another daily newspaper, the Hartford Times.

The Bulkeley Bridge carries I-84 across the Connecticut River

I-384 looking east from Exit 3 in Manchester, Connecticut

Westbound on Route 2 at its interchange with I-84

There were several plans to expand the highway system (with at least one plan calling for a full beltway). Various plans encountered resistance due to budgetary and environmental concerns. However, some highways were ultimately constructed, if only partially:

Public bus transportation is operated by the Hartford division of CTTransit. It provides service to 30 local routes and 12 express routes seven days a week throughout the metropolitan area. [34]

2015 saw the opening of the CTfastrak, a bus rapid transit system that runs from downtown New Britain to Hartford Union Station. The dedicated busway is over 9 miles long and stops at 10 stations. [35] [36] [37]

Bradley International Airport ( IATA: BDL, ICAO: KBDL, FAA LID: BDL) is located in the town of Windsor Locks, approximately 10 miles from Hartford. Bradley is the second-largest airport in New England (behind Logan International Airport), and was ranked the 55th busiest airport in the United States in 2008. [38] [39] Southwest Airlines, Delta Air Lines, JetBlue Airways, and US Airways account for more than half of the airport's passenger traffic. [40] [41] The Bradley Airport Connector provides highway access to the airport from Interstate 91.

Several Amtrak routes run through the metropolitan area, including the Northeast Regional, Vermonter, as well as a daily shuttle between New Haven and Springfield, Massachusetts.

The Hartford Line is a planned commuter rail service. It will use the same line as the Amtrak shuttle, and will stop at 12 stations along the way. Service is anticipated to begin in late 2016. [43] 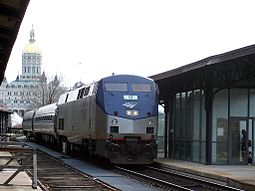 Terminal A of Bradley International Airport