From Wikipedia, the free encyclopedia
Metropolitan area in the United States

Greater Boston is the metropolitan region of New England encompassing the municipality of Boston, the capital of the U.S. state of Massachusetts and the most populous city in New England, as well as its surrounding areas. The region forms the northern arc of the US northeast megalopolis and as such, Greater Boston can be described either as a metropolitan statistical area (MSA), or as a broader combined statistical area (CSA). The MSA consists of most of the eastern third of Massachusetts, excluding the South Coast region and Cape Cod; while the CSA additionally includes the municipalities of Providence, Rhode Island, Manchester (the largest city in the U.S. state of New Hampshire), Worcester, Massachusetts (the second largest city in New England), as well as the South Coast region and Cape Cod in Massachusetts. While the small footprint of the city of Boston itself only contains an estimated 685,094, the urbanization has extended well into surrounding areas; the CSA is one of two in Massachusetts, the only other being Greater Springfield. Greater Boston is the only CSA-form statistical area in New England which crosses into three states (Massachusetts, New Hampshire and Rhode Island).

Some of Greater Boston's most well-known contributions involve the region's higher education and medical institutions. Greater Boston has been influential upon American history and industry. The region and the state of Massachusetts are global leaders in biotechnology, engineering, higher education, finance, and maritime trade. [1]

Over 80% of Massachusetts' population lives in the Greater Boston metropolitan region. Greater Boston is ranked tenth in population among US metropolitan statistical areas, home to 4,875,390 people as of the 2018 US Census estimate, and sixth among combined statistical areas, with a population of 8,285,407. [2] The area has hosted many people and sites significant to American culture and history, particularly American literature, [3] politics, and the American Revolution.

Plymouth was the site of the first colony in New England, founded in 1620 by the Pilgrims, passengers of the Mayflower. In 1692, the town of Salem and surrounding areas experienced one of America's most infamous cases of mass hysteria, the Salem witch trials. [4] In the late 18th century, Boston became known as the "Cradle of Liberty" [5] for the agitation there that led to the American Revolution.

The Greater Boston region has played a powerful scientific, commercial, and cultural role in the history of the United States. Before the American Civil War, the region was a center for the abolitionist, temperance, [6] and transcendentalist [7] movements. [8] In 2004, Massachusetts became the first U.S. state to legally recognize same-sex marriage as a result of the decision of the Massachusetts Supreme Judicial Court in Boston. [9] Many prominent American political dynasties have hailed from the Boston region, including the Adams and Kennedy families.

Harvard University in Cambridge is the oldest institution of higher learning in the United States, [10] with the largest financial endowment of any university, [11] and whose Law School has spawned a contemporaneous majority of United States Supreme Court Justices. [12] Kendall Square in Cambridge has been called "the most innovative square mile on the planet", in reference to the high concentration of entrepreneurial start-ups and quality of innovation which have emerged in the vicinity of the square since 2010. [13] [14] Both Harvard University and the Massachusetts Institute of Technology, also in Cambridge, have been ranked among the most highly regarded academic institutions in the world. [15]

The most restrictive definition of the Greater Boston area is the region administered by the Metropolitan Area Planning Council. [16] The MAPC is a regional planning organization created by the Massachusetts legislature to oversee transportation infrastructure and economic development concerns in the Boston area. The MAPC includes 101 cities and towns that are grouped into eight subregions. These include most of the area within the region's outer circumferential highway, I-495. In 2013, the population of the MAPC district was 3.2 million, which was 48% of the total population of Massachusetts, [17] in an area of 1,422 square miles (3,680 km2), [16] of which 39% is forested and an additional 11% is water, wetland, or other open space. [18]

Notably excluded from the MAPC and its partner planning body, the Boston Region Metropolitan Planning Organization, are the Merrimack Valley cities of Lowell, Lawrence, and Haverhill, much of Plymouth County, and all of Bristol County; these areas have their own regional planning bodies. Bristol County is part of the Greater Boston CSA, as part of the Providence MSA.

Cambridge and Boston; MIT and Kendall Square in the foreground, and Boston's Financial District in the background

The urbanized area surrounding Boston serves as the core of a definition used by the US Census Bureau known as the New England city and town area (NECTA). The set of towns containing the core urbanized area, along with surrounding towns with strong social and economic ties to the core area, is defined as the Boston–Cambridge–Nashua, MA–NH Metropolitan NECTA. [19] The Boston NECTA is further subdivided into several NECTA divisions, which are listed below. The Boston, Framingham, and Peabody NECTA divisions together correspond roughly to the MAPC area. The total population of the Boston NECTA was 4,540,941 (as of 2000 [update]).

An alternative definition defined by the United States Office of Management and Budget, using counties as building blocks instead of towns, is the Boston–Cambridge–Newton, MA–NH Metropolitan Statistical Area, which is further subdivided into three metropolitan divisions. The metropolitan statistical area had a total population of approximately 4,875,390 as of 2018 [update] and is the tenth-largest in the United States. The components of the metropolitan area with their estimated 2018 populations are listed below.

A wider functional metropolitan area based on commuting patterns is also defined by the Office of Management and Budget as the Boston–Worcester–Providence combined statistical area. This area consists of the metropolitan areas of Manchester, Worcester, Providence, as well as Cape Cod, in addition to greater Boston. The total population as of 2018 [update] for the extended region was estimated at 8,285,417. The following areas, along with the above MSA, are included in the combined statistical area, with their estimated 2018 populations: 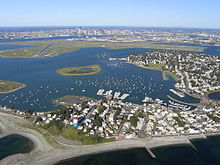 The Census Bureau defines the following as principal cities in the Boston NECTA [19] using criteria developed for what the Office of Management and Budget calls a Core Based Statistical Area: [20]

Cities and towns in the Boston CSA with at least 50,000 residents:

St. Patrick's Day Parade in Scituate, Massachusetts, in Plymouth County, the municipality with the highest percentage identifying Irish ancestry in the United States, at 47.5% in 2010. [22] Irish Americans constitute the largest ethnicity in Greater Boston.

Boston's Chinatown, with its paifang gate, is home to many Chinese and also Vietnamese restaurants. 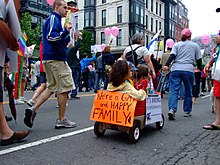 The 40 most diverse Census tracts in the Boston CSA: [23]

The 40 census tracts in the Boston CSA with the highest percentage of residents who identify as Hispanic or Latino: [23]

Census tracts in the Boston CSA with the highest percentage of residents who identify as Black American: [23]

Census tracts in the Boston CSA with the highest percentage of residents who identify as Asian American: [23]

Census tracts in the Boston CSA with the highest percentage of residents who identify as Irish American: [24]

Census tracts in the Boston CSA with the highest percentage of residents who identify as Italian American: [25]

Census tracts in the Boston CSA with the highest percentage of residents who identify as Portuguese American: [26]

Census tracts in the Boston CSA with French or French Canadian listed as first ancestry: [27]

Greater Boston has a sizable Jewish community, estimated at between 210,000 people, [28] [29] and 261,000 [30] or 5–6% of the Greater Boston metro population, compared with about 2% for the nation as a whole. Contrary to national trends, the number of Jews in Greater Boston has been growing, fueled by the fact that 60% of children in Jewish mixed-faith families are raised Jewish, compared with roughly one in three nationally. [28]

The City of Boston also has one of the largest LGBT populations per capita. It ranks fifth of all major cities in the country (behind San Francisco, and slightly behind Seattle, Atlanta, and Minneapolis respectively), with 12.3% of the city identifying as gay, lesbian, or bisexual. [31]

Harvard University (top) and MIT (bottom) are both widely regarded as in the top handful of universities worldwide for academic research in various disciplines. [15]

A long established center of higher education, the area includes many community colleges, two-year schools, and internationally prominent undergraduate and graduate institutions. The graduate schools include highly regarded schools of law, medicine, business, technology, international relations, public health, education, and religion. Greater Boston contains seven R1 Research Institutions as per the Carnegie Classification of Institutions of Higher Education. This is, by far, the highest number of such institutions in a single Metropolitan Statistical Area in the United States.

Changes in house prices for the Greater Boston area are publicly tracked on a regular basis using the Case–Shiller index; the statistic is published by Standard & Poor's and is also a component of S&P's 10-city composite index of the value of the residential real estate market.

The MBTA district, with Commuter Rail lines in purple

The first railway line in the United States was in Quincy. See Neponset River. 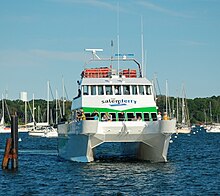