Map showing the location of the Great South Bay

Great South Bay, actually a lagoon, [1] is situated between Long Island and Fire Island, in the State of New York. It is approximately 45 miles (72 km) long and has an average depth of 4 foot 3 inches and is 20 feet at its deepest. [2] It is protected from the Atlantic Ocean by Fire Island, a barrier island, as well as the eastern end of Jones Beach Island and Captree Island. 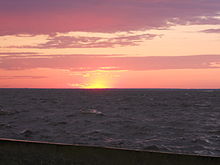 Sunset over the bay

The bay is accessible from the ocean through Fire Island Inlet, which lies between the western tip of Fire Island and the eastern tip of Jones Beach Island. The bay adjoins South Oyster Bay on its western end, and Patchogue and Moriches bays at the east end. 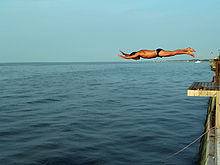 A man dives into the Bay

In the late nineteenth century Great South Bay provided many of the clams consumed throughout the region and even the country. The first oysters to be exported from the US to Europe came from Great South Bay. By the latter 20th century, a significant percentage of the habitat was lost. [4] Recently the largest storm on record since 1938, Hurricane Sandy, made landfall with devastating impact to Fire Island sea shores, including multiple breaches. The largest forming just south of Bellport, Long Island. This was formerly known as Old Inlet. Residents were concerned it would have effects on tidal increases and potential flooding, when in actuality it has allowed the bay to relieve some of its captive water, which has changed the salinity and nitrogen levels in the bay. [5]The Bay has, after roughly 75 years, begun flushing itself out which may improve the water condition within the bay. [6] Regulations set forth by the US Government National Wildlife Preserve, which has a seven-mile stretch of land (The Otis Pike Fire Island High Dune Wilderness) prohibit any unauthorized parties from performing any kind of man made changes, thus the inlet has remained open. There have been a number of ongoing public meeting discussing the future of the Inlet. [7] All the other breaches were closed by the Army Corps of Engineers. In 2012 The Save the Great South Bay (STBSB) not-for-profit organization was formed in order to work towards better conservation of the water and its beachfronts. [8] [9]Save The Great South Bay has increased concerns about boat sewerage pumpouts in The Great South Bay as a serious ecological concern. [10]