From Wikipedia, the free encyclopedia
(Redirected from Grand Canyon Association)

Grand Canyon Conservancy was founded in 1932 as the Grand Canyon Natural History Association by naturalist Edwin "Eddie" McKee. [2] A ranger working on the South Rim of Grand Canyon National Park, McKee saw the need for a park partner that would support interpretive programs and publications about the canyon, and from its beginnings the natural history association did just that, funding interpretive talks, research, and scientific papers. In 1937, the GCNHA was legally established as a cooperating association, a private, nonprofit organization whose mission was to support the education and preservation programs of federally protected lands. [3] The purpose of the GCNHA was "to stimulate and encourage scientific research and investigation in the field of geology, botany, zoology, ethnology, archaeology, and related subjects in the Grand Canyon region." [4]

In October 1994, the conservancy's board of directors approved changing the name of the association from the Grand Canyon Natural History Association to Grand Canyon Association, in part to emphasize an expanding list of services, books, and products focusing on cultural history, thus not always fitting the bill of "natural history." [5]

Grand Canyon Conservancy has helped to fund and execute a variety of projects within the park. Recent projects include: 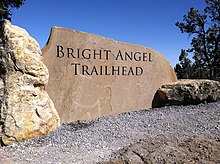 The new Bright Angel Trailhead sign, installed as part of the renovations.

A Grand Vision is Grand Canyon Conservancy and National Park Services' strategic vision for improvements at the park. The campaign will celebrate Grand Canyon's Centennial in 2019. The projects listed below are the priorities of the campaign.

Because trail restoration is so challenging, it’s estimated that a single mile of trail restoration work costs $250,000. Mules haul equipment and materials to work sites and often the trail crews only tools are pickaxes and shovels.

A Grand Vision Campaign hopes to establish a Trails Forever endowment which will support a full season of Youth Conservation Corps workers dedicated to trail restoration and will allow the park to plan a comprehensive program for trail restoration.

Desert View Watchtower was designed by Mary Colter in the 1930s. Grand Canyon Conservancy, the National Park Service and the Inter-tribal Advisory Council plan to transform the Desert View area into a thriving space that celebrates the tribal heritages of Grand Canyon and create a visitor experience that informs visitors from around the world of the diverse cultures at Grand Canyon.

Grand Canyon National Park is one of the last places in the United States where one can experience a star-filled night sky. One-third of the world's population - including 80% of Americans - can no longer see the Milky Way.

32,000 new Junior Rangers. Children complete a series of activities during their park visit and are then sworn to protect the park

In association with the Grand Canyon National Park, GCC publishes a supporter magazine, Canyon Views on a seasonal basis.

Supporter contributions have an immediate impact by supporting restoration of world-renowned trails and historic buildings, funding wildlife and habitat preservation, and helping educate the next generation of park stewards.