The idea to hold a World's Fair to commemorate the completion of the Bay Bridge and Golden Gate Bridge started from a letter to The San Francisco News in February 1933. [1] Architects W.P. Day and George Kelham were assigned to consider the merits of potential sites around the city, including Golden Gate Park, China Basin, Candle Stick Point, and Lake Merced. [2] By 1934, the choice of sites had been narrowed to the areas adjoining the two bridges: either "an island built up from shallow water" north of Yerba Buena Island which would go on to be named Treasure Island, or the Presidio, which had previously been used in 1915 for the Panama–Pacific International Exposition. [3] Yerba Buena Shoals was chosen as the site in February 1935. [4] In August 1935, a $10 million proposal using federal WPA funds for construction work was advanced, [5] and in October of that year, Leland W. Culter, president of San Francisco Bay Exposition, Inc., announced that President Roosevelt had approved US$3,000,000 (equivalent to $55,940,000 in 2019) to help fund the cost of reclaiming land at Yerba Buena Shoals. [6]

Built by the federal government, Treasure Island was intended to serve as the municipal airport for San Francisco, an idea which had first been advanced in 1931. [11] Air service would have included Pan American's transpacific flying boats, like the China Clipper. Due to wartime needs, it was taken over by the US Navy as Naval Station Treasure Island from 1941 to 1997. [12]

Pageant of the Pacific 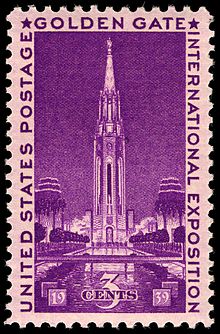 1939 U.S. commemorative stamp featuring the Tower of the Sun

The theme of the exposition was "Pageant of the Pacific", as it showcased the goods of nations bordering the Pacific Ocean. The theme was physically symbolized by "The Tower of the Sun;" by an 80-foot statue of Pacifica, goddess of the Pacific ocean; and by architect Mark Daniels' Chinese village. [15]

As the boundaries of human intercourse are widened by giant strides of trade and travel, it is of vital import that the bonds of human understanding be maintained, enlarged and strengthened rapidly. Unity of the Pacific nations is America's concern and responsibility; their onward progress deserves now a recognition that will be a stimulus as well.
Washington is remote from the Pacific. San Francisco stands at the doorway to the sea that roars upon the shores of all these nations, and so to the Golden Gate International Exposition I gladly entrust a solemn duty. May this, America's World's Fair on the Pacific in 1939, truly serve all nations in symbolizing their destinies, one with every other, through the ages to come.

— President Franklin D. Roosevelt, via radio, during the opening ceremonies. [16]>

The San Francisco Downtown Association created the 49-Mile Scenic Drive to promote the exposition and the city. The drive started at San Francisco City Hall and ended on Treasure Island after winding around the " City by the Bay."

W.P. Day, a locally prominent architect, was appointed director of works and George W. Kelham served as the chief architect until his death in October 1936, when he was succeeded by Arthur Brown Jr. [17]

During the Expo in 1939, Master carver John Wallace (Haida) demonstrated the art of carving totem poles for visitors. [18]

The Art in Action exhibition was staged at GGIE during its second session in the summer of 1940 to show artists at work and attract visitors.

As part of the exposition, the California Coliseum, located near the grounds' northeast corner, hosted the Western Regional Semifinal and Final rounds of the first-ever NCAA Division I Men's Basketball Tournament. The Coliseum, listed in NCAA guidebooks as having a capacity of 9,476, [19] hosted two Elite Eight games and a Final Four game (before 1952, there were only two regions and the champions met in the National Championship game, which was the only game played at what is now considered a "Final Four" site). The Western regional included the Oklahoma Sooners, Oregon Webfoots, Texas Longhorns, and Utah State Aggies. In the opening of round of Regional Semifinals (now referred to as the Elite Eight), Oregon beat Texas 56-41 and Oklahoma beat Utah State 50-39. In the Regional Final round (now known as the National Semifinal round), the Webfoots beat the Sooners 55-37, advancing to the National Championship game in Evanston, Illinois, where they won the first ever national championship 46-30 over the Ohio State Buckeyes. There was also a regional third place game played in the Coliseum, which was won by the Aggies, 51-49. 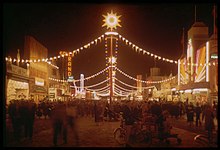 The Key System ran special trains to the fair from the East Bay area during the first year, bearing the "X" designation for "Exposition". These trains ran along the same East Bay routes as the Key transbay trains, and used the same rolling stock, the "bridge units", but instead of using the newly opened bridge railway, they were diverted to the old Key System ferry pier ("mole") as there was no stop available at Yerba Buena Island. A ferry crossed the relatively short span of water between the end of the pier and Treasure Island. This service ended at the close of the first phase of the exposition at the end of 1939. In 1940, the "X" train-ferry service was entirely replaced by Key System buses, also designated "X".

The Atchison, Topeka and Santa Fe Railway started a passenger train, the Valley Flyer, to carry passengers between Bakersfield and Oakland during the exposition. [24] The Chicago, Burlington, and Quincy Railroad, Denver and Rio Grande Western Railroad, and the Western Pacific Railroad launched the Exposition Flyer passenger service between Chicago and Oakland, named for the Golden Gate International Exposition. [25]

In October 2010, the National Building Museum in Washington, D.C. opened an exhibition titled Designing Tomorrow: America’s World’s Fairs of the 1930s. [26] This exhibition, which was available for view until September 2011, prominently featured the Golden Gate International Exposition.

Many of the art pieces that were created from the Art in Action exhibition, including the Pan American Unity mural by Diego Rivera, three Dudley C. Carter wood carvings, and two Frederick E. Olmsted sculptures are now housed and displayed at City College of San Francisco. [27]

The Fauna and Flora of the Pacific mural by Miguel Covarrubias is now on display at the de Young museum in San Francisco. The colorful and oversized map depicts the four Pacific Rim continents with examples of their flora and fauna suspended in a swirling Pacific Ocean populated with sea creatures. [28]