From Wikipedia, the free encyclopedia
(Redirected from God TV)

GOD TV is an evangelical Christian media network that started in the UK and is now worldwide. The network has a strong presence in Israel and the US and its main offices are located in Plymouth, England, UK, [2] and Orlando, Florida, US. Regional offices are situated in India, Sri Lanka, South Africa, Kenya, Ghana and Australia.

GOD TV's original productions have won awards from the Christian Broadcasting Council of the UK. Its schedule has five regional variations: USA; UK & Europe; Africa; Asia and Australasia each with local programming.

The Plymouth Herald quotes a GOD TV regional director in 2014 as stating that it can reach 262 million homes worldwide including 93 million homes in India. [5] 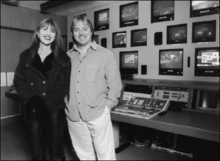 GOD TV was founded by Rory and Wendy Alec in England in 1995 as the Christian Channel Europe, the Continent's first daily Christian television network. It started broadcasting on 1 October, two hours each day. [6] This increased to seven hours in 1997 and 24-hours in 1999. The 'GOD' logo appeared in 1997 and the Christian Channel was rebranded as the GOD Channel. The GOD Channel became part of the Dream Family Network, later known as GOD Digital and then GOD TV in 2002. The same year GOD TV's broadcast uplink was moved to Israel. [7] This provided for international expansion via satellite and GOD TV was launched across Africa and Asia with new offices in Cape Town and Chennai.

In 2003 a GOD TV office was established in the US in Orlando FL and in 2005 GOD TV launched across Australia and New Zealand. GOD TV launched on DIRECTV, America's largest satellite platform in 2006 [8] and opened a new office in Colombo, Sri Lanka in 2008. GOD TV also expanded into China during 2008. [9] Further offices were opened in Nairobi and Melbourne in 2009.

Rory Alec was the network's CEO from 1995 to 2014, when GOD TV announced his resignation due to "moral failure." [10] The couple divorced in 2015. Wendy Alec attributed the end of their marriage to Satan leading her husband to have an affair. [11] Wendy Alec took over as President and CEO, a position she held for two years, before appointing Ward Simpson.

In January 2018, GOD TV launched www.godtv.com as a new digital publishing arm of the organization.

Communications scholar Pradip N. Thomas places the history of GOD TV into the larger context of a neo-imperialist project within Christian fundamentalism, comparing GOD TV's Christian Zionist messages to Franklin Graham's travel to wartime Baghdad, which Graham presented as a triumph of Christianity over Islam. Thomas notes that in India, GOD TV provides a platform for a "closing of ranks" among different Indian Christian groups, allowing an expression of Christian unity which is partly a reaction against Hindu nationalism. [12]

Much of GOD TV's programming caters to a youth audience. [13] The network aims to air 'relevant youth programming' that comprises series and events from leading youth ministries and featuring bands such as Leeland, Switchfoot, Rend Collective, Jars of Clay, Guvna B and Newworldson.

GOD TV publishes content by Exodus International and Focus on the Family that advocates for conversion therapy, [14] the pseudoscientific practice of attempting to change sexual orientation. [15]

According to the BBC, GOD TV was criticized by the organizations Pride in Plymouth and Plymouth Humanists for inviting televangelist Andrew Wommack to "publicly preach discrimination towards LGBT people" at an annual gathering in 2015. [17]

David Amsalem, Israeli Minister of Communications, warned GOD TV's Israeli affiliate in May 2020 that it may be in violation of a law against proselytising and risks being shut down. [18] It was later determined to violate said law and was ordered off Israeli airspace a month later in June. [19]

Television satirist and critic Victor Lewis-Smith described GOD TV's programming as "hour upon hour of hate-filled, rabble-rousing, homophobic bigotry, much of it featuring (and funded by) right-wing American evangelists" in 2002. [12]

GOD TV has several specific regions, each with its own regional director and office overseeing local content, distribution and providing viewer services. The regions are: the USA; UK, Europe, Scandinavia and Nordic countries; Africa and East Africa; Asia and the Middle East; Israel; Sri Lanka and Australasia.

GOD TV launched in the US in 2006 on DirecTV. It is also available in some US cities via cable. [20]

GOD TV launched in Orlando, Florida in 2012 via WACX's second subchannel over-the-air; some GOD TV programming is also seen on the station's main schedule. [21] As part of the Orlando launch, the Bay Revival on Tour was broadcast from Calvary Assembly of God in Winter Park with John Kilpatrick, Nathan Morris and Lydia Marrow. [22] The network maintains an office in Orlando.

The Angel Foundation is GOD TV's registered charity in Europe and is regulated by the Charity Commission for England and Wales. Based in Plymouth the Angel Foundation states that it is committed to "the advancement of the Christian religion and education, and the relief of poverty, distress and sickness." [23] As of 2010 [update] GOD TV was "potentially available to up to 14 million homes in the UK". [24]

Fergus Scarfe is GOD TV's Regional Director for the UK & Ireland, based in Plymouth [25]

Some European networks carry GOD TV in their satellite and cable television packages in Belgium, France, [28] and Germany. [29]

Angel Television Africa was established in South Africa in 2002 and GOD TV launched across Africa on 31 May of the same year. [30] Marcél Olivier is GOD TV's Regional Director for Africa and heads up the office in Cape Town. Erastus Maina oversees GOD TV's East Africa Region, with an office in Nairobi.

GOD TV's programming can be accessed across Africa via satellite. It can be watched via ViewSat covering 20 million homes across Sub-Saharan Africa on the IS20 satellite. [31] In Kenya GOD TV is carried on Kiss TV. [32]

The network hosts tours to Israel which include visiting Bible sites and staging events that are broadcast worldwide. The largest tour to date was in 2008 with 1,800 tour goers who attended 'A Celebration of Israel's 60th Anniversary'. Held at the Davidson Center alongside the Western Wall in the Old City, this was attended by both Jewish and Christian guests. [35] GOD TV's Arise Zion Tour will take place in 2018 as part of Israel's 70th Anniversary celebrations.

In 2009 GOD TV partnered with the Jewish National Fund (JNF) US$500,000 to plant trees on land said to be inhabited by Bedouin tribes in Israel's Negev region. A coalition of Jewish and Arab human rights groups denounced the project, accusing GOD TV and the JNF of teaming up to force the Bedouin out of the area to make way for Jewish communities. [36]

GOD TV's CEO Ward Simpson was in Israel in October 2017 at the invitation of the Israeli government, to address a Christian Media Summit in Jerusalem. [37]

In June 2020, the channel was ordered to shut down for violating the country's laws concerning proselytism. [19]

Angel Christian Charitable Foundation India was founded in 2002 with an office in Chennai headed by Thomas Robinson. [38]

GOD TV has broadcast a 'Middle East Special' helping to provide food for beleaguered Christians and Muslims in war-torn Iraq. [40]

Angel Christian Television Australia Limited was established in 2005 [42] enabling GOD TV to be watched on the Optus D2 satellite. [43] GOD TV's office for this region is in Melbourne and is managed by Wayne Knapman. [44]

Corrective Services Queensland has allowed Instal-Life to provide equipment enabling inmates across the state to access GOD TV in their cells. Prisons in Western Australia have also installed GOD TV and it is available in other rehabilitation centres and remote indigenous communities. [49]

The Melbourne office also manages Hong Kong, Macau and Greater China. Macau Cable has been broadcasting the GOD TV signal into Macau since 1 October 2006. GOD TV launched its Greater China service on 16 October 2008 [9] and has televised events from China. [50] The Kingdom Culture Conference has aired on GOD TV from Hong Kong.

In Malawi, it cares for HIV/AIDS orphans by supporting Kondanani Children's Village, founded by Annie Chikhwaza. [51] and is involved in various charitable initiatives in Sri Lanka. In the UK it supports Mercy Ministries, a charity helping young women suffering from abuse.

GOD TV has raised funds to help Christians in Iraq at St George's Church in Baghdad, through a Middle East Special. [52] A target of its humanitarian work has been to provide clean water in arid regions of Africa (Kenya and Tanzania) where it has drilled water wells. A community 'Life Center' was built in Tanzania in conjunction with Pat Boone. [53]