The Gerald Desmond Bridge is a through arch bridge that carries four lanes of Ocean Boulevard from Interstate 710 in Long Beach, California, west across the Back Channel to Terminal Island. The bridge is named after Gerald Desmond, a prominent civic leader and a former city attorney for the City of Long Beach.

Prior to 1944, the only road access to Terminal Island was via Badger Avenue (later Henry Ford Avenue, after an assembly plant that was built on the island) over the Henry Ford Bridge.

The first bridge linking the eastern end of Terminal Island and Long Beach was an unnamed "temporary" pontoon bridge constructed during World War II to accommodate traffic resulting from the expansion of the Long Beach Naval Shipyard. The pontoon bridge was intended to last six months, but was not replaced until 1968, 24 years after it had opened. Depending on the level of the tide, road traffic had to descend 17 to 25 feet (5.2 to 7.6 m) below the level on the shore. When marine traffic required the bridge to open, traffic delays of up to 15 minutes could occur. [1] An estimate of seven people died after driving off the pontoon bridge. [1] [2]

The 1968 through-arch bridge was designed by Moffatt & Nichol [3] Engineers and was constructed by Bethlehem Steel [4] as a replacement for the World War II-era pontoon bridge. [5] Gerald Desmond served as City Attorney for Long Beach and played a significant role in obtaining tideland oil funds which helped finance the bridge that would later bear his name. Desmond died in office at age 48 of kidney cancer. [6] One year after Desmond's death in January 1964, ground-breaking for the construction of the new bridge occurred on October 19, 1965, and it was completed in June 1968. Desmond's son, also named Gerald, sank the final "golden" bolt. [6]

It has a 527-foot-long (161 m) suspended main span and a 155-foot (47 m) vertical clearance spanning the Cerritos Channel. The western terminus of the bridge is on the east side of Terminal Island; the eastern terminus is close to downtown Long Beach. The bridge separates the inner harbor (north of the bridge) of the Port of Long Beach from the middle harbor.

The bridge was retrofitted with vibration isolators and additional foundation work (widening footings and adding pilings) was performed to upgrade the seismic resistance from 1996–97 prior to the transfer of ownership from the Port of Long Beach to Caltrans. [7]

At the time of its completion in 1968, traffic was projected to be modest and mainly limited to workers commuting to jobs at the Long Beach Naval Shipyard. When the Long Beach NSY was closed in 1997, that land was converted and served as home to one of the busiest container terminals in the United States, resulting in greater cargo truck and marine traffic. By some estimates, truck traffic across the bridge tripled in the years following the closure of the Long Beach NSY. [8] By 2010, the 155-foot (47 m) vertical clearance of the 1968 bridge was one of the lowest for a commercial seaport, especially at the Port of Long Beach, which remains one of the busiest container ports in the United States. [9] In addition, the bridge was not designed for the traffic it carried (62,000 vehicles daily in 2012), and the added stress was causing pieces of concrete to fall from the bridge's underside, forcing the Port of Long Beach to install nylon mesh "diapers" in 2004 to catch these chunks. [8] Studies to widen the bridge were funded in 1987. [10] Caltrans rated the structural sufficiency of the Desmond Bridge at 43 points out of possible 100 in 2007. [11]

Also, since the 1968 bridge roadway lacks emergency/breakdown lanes, multiple lanes would be shut down in the event of an accident, snarling traffic. [12] Other deficiencies cited include the steep approach grades (5.5 percent on the west side and 6 percent on the east side) [13]

Competition in the marine shipping industry meant shipping companies were interested in boosting operating efficiency, mainly by building ever-larger container ships. The Gerald Desmond Bridge became a barrier for large ships entering the Inner Harbor at Long Beach, with its restrictive 155-foot (47 m) vertical clearance. This restrictive vertical clearance was cited as a factor in an observed drop in the Port of Long Beach's share of United States container imports. According to U.S. census data, the ports of Long Beach and Los Angeles handled 32% of U.S. container imports in 2013, down from 39% in 2002. [14] Port officials estimated that 10% of all waterborne cargo in the United States passed over the Desmond Bridge (either going to or coming from the Ports of Long Beach and Los Angeles) in 2004, [8] raising the estimate to 15% by 2010. [11]

In March 2012, the insufficient vertical clearance of the bridge prevented passage of the 12,562  TEU MSC Fabiola, the largest container ship ever to enter the Port of Long Beach. The height restriction prevented the ship from docking at the Mediterranean Shipping Company (MSC) dock; it docked at the Hanjin terminal instead. [15]

View of the old Gerald Desmond Bridge from the north, looking south-southeast. Netting is visible on the bottom of the truss spans flanking the main arch span, serving to catch chunks of decaying concrete that occasionally fall from the structure.

The 1968 steel arch bridge developed numerous issues (detailed above), and the Port of Long Beach suggested it would be more economical to replace the bridge. After several years of studies, a cable-stayed bridge with 205 feet (62 m) of vertical clearance to be built north of the existing bridge was identified as the preferred alternative in the final environmental impact report (2010 FEIR). [13] The new bridge will allow access to the port for the tallest container ships, and will be the first long-span cable-stayed bridge in California, and the first and only cable-stayed bridge in the Los Angeles metropolitan area. [17] For the bridge to be so tall, long approaches will be required to allow trucks to cross. [18] A joint venture of Parsons Transportation Group and HNTB performed preliminary engineering for the main span and the approaches. Earlier reports had studied and discarded various alternatives, including an alternative alignment with a new bridge south of the existing bridge, rehabilitation of the existing bridge, and a tunnel instead of an elevated bridge. [13]

The current roadway is four lanes (two in each direction) with a fifth climbing lane on each end. The replacement bridge will carry a six-lane roadway with emergency lanes on each side, and the grade will decrease by building a longer approach, despite the higher vertical clearance over the Back Channel; the planned improvements will bring the bridge up to current freeway standards. [19] The replacement bridge will also carry a pedestrian/bike path and observation decks over the water along the south side of the bridge. The path is named for Mark Bixby, a longtime proponent of adding bike lanes to the replacement for the Gerald Desmond Bridge [20] [21] and a descendant of one of the original founders of Long Beach. Mark Bixby died in a March 2011 plane crash at the Long Beach Airport. [22]

Ocean Boulevard, currently carried by the 1968 bridge, is operated by the City of Long Beach. When the replacement bridge is completed, the roadway it carries will be redesignated the western extension of I-710, extending to its intersection with State Route 47, and it will become the responsibility of Caltrans, District 7. [19]

By extending the approach structures, approach grades are reduced to no more than 5 percent. [13]

As the tallest structure in the area, the 2018 cable-stayed bridge will be a prominent addition to the Long Beach skyline. [24] 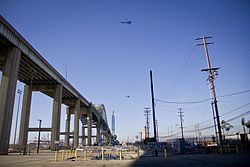 Helicopters hover 515 feet (157 m) above the ground during the January 8, 2013 groundbreaking ceremony, illustrating the height of the two cable towers in the planned replacement bridge.

Three of the pre-qualified bidders submitted proposals by March 2012, with Kiewit dropping out at the bid stage. [27] In May 2012, the Long Beach Board of Harbor Commissioners approved Port of Long Beach staff’s recommendation that the “best value” design-build proposal to replace the Gerald Desmond Bridge was submitted by the SFI joint venture team, comprising Shimmick Construction Company Inc., FCC Construction S.A. and Impregilo S.p.A., [28] and the contract was awarded to the SFI JV in July 2012. [29] Major participants in the joint venture also include Arup North America Ltd. and Biggs Cardosa Associates Inc. [30]

The project is to be completed as a design-build in contrast to the traditional design-bid-build used typically in infrastructure improvement. [30]

During the groundbreaking ceremony on January 8, 2013, two helicopters hovered 515 feet (157 m) above ground level, illustrating the height of the two cable towers for the planned replacement bridge. [31]

The new bridge was delayed shortly after breaking ground. The new piers were delayed by the relocation and/or removal of numerous old and active oil wells and utility lines, which prevented foundation work from beginning. The bridge is located in the midst of the Wilmington Oil Field, one of the most prolific oil-producing fields located in the United States. [33]

Another part of the cost increase and schedule delay is attributed to a 2013 redesign of the support towers. [34] Caltrans and the Port of Long Beach required the tower redesign, executed by the SFI joint venture, allegedly to ensure seismic safety and to preserve long term structural integrity. The redesign set the estimated completion of the bridge back by 12 to 18 months. [35] Other cost increases are attributed to extra oversight required by innovative, yet contractually compliant products and materials proposed by the designers of the replacement bridge. [17]

The roadway for the approach structures will be supported during construction by an underlane self-launched movable scaffold system (MSS), [36] and it will be the first project in California to use a MSS. [37] The MSS is designed to bridge the 235 ft (72 m) span between piers and will support the concrete as it is poured for each span. Once the concrete has cured, the MSS will move to the next pier and repeat the pour. The orange MSS is being used on the western (Terminal Island) approach, and a similar blue MSS is being used on the eastern approach. [37]

By October 2014, work had started on the pilings which would serve as foundations for the new bridge's piers. [38] The two cable-stay support towers were started in March (eastern tower) and April 2015 (western tower). [36] Approach spans were underway by April 2016. [37] By August 2016, the project had passed the halfway mark, and the two cable support towers were already more than 200 ft (61 m) high. [39] On December 5, 2017, a "topping-out" ceremony was held to celebrate the completion of the two cable support towers. [16]

The 1968 arch bridge had a featured role in the film Head, featuring rock group The Monkees, released in 1968. The first scene of the film features the actual dedication ceremony for the bridge, which is interrupted by the Monkees running into the middle of the ceremony and Micky Dolenz jumping off the bridge. At the conclusion of the film, the Monkees return to the bridge and each of them jumps from it.

Elysian Freeway Bridge, based on the 1968 arch bridge is also featured in the 2013 video game Grand Theft Auto V . It carries the Elysian Fields Freeway in-game.