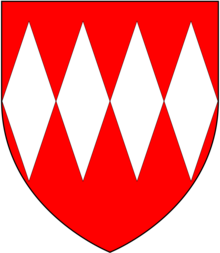 Vice Admiral Sir George Carteret, 1st Baronet ( c.1610—18 January 1680 N.S.) was a royalist statesman in Jersey and England, who served in the Clarendon Ministry as Treasurer of the Navy. He was also one of the original lords proprietor of the former British colony of Carolina and New Jersey. Carteret, New Jersey, as well as Carteret County, North Carolina, both in the United States, are named after him. He acquired the manor of Haynes, Bedfordshire, (alias Hawnes) in about 1667. [1]

Carteret was the son of Elias de Carteret and Elizabeth Dumaresq of Jersey, who both died in 1640[ citation needed] (George dropped the "de" from his surname when he entered the English navy, concerned that it sounded too French). He was "bred for the sea" and served as an officer in various naval ships in the 1630s and commanded the Mary Rose before becoming Comptroller of the Navy in 1641. [2]

As a result of his early life at sea, he received little or no formal education, and his embarrassing ignorance was a source of much ridicule in later life. Andrew Marvell mocked his poor command of English, and Samuel Pepys remarked that his ignorance of even the most basic Latin phrases would cause a schoolboy to be whipped. "Such ignorance is not to be borne in a Privy Councillor', wrote Pepys severely.

On the commencement of the Civil War he retired from the navy, and withdrew with his family to Jersey, but subsequently returned to aid the projects of the royalists. He afterwards, on the ruin of the royal cause, afforded an asylum to the Prince of Wales ( Charles Stuart) and other refugees of distinction within his government of Jersey, where he served as Bailiff (1643–1651), [2] and defended Jersey against the Parliamentarians: the island in October and then Elizabeth Castle, finally surrendering in December 1651.

George Carteret also had Charles II proclaimed King in Saint Helier on 17 February 1649, after the execution of his father, Charles I. [3] Charles II never forgot this gesture. However, he had to surrender Jersey to the Commonwealth of England. He then went into exile in France, where he was imprisoned in 1657 and then exiled from there, after which he went to Venice. The warmth and kindness with which he received the refugees earned him a permanent place in the King's affections, and also the friendship of Edward Hyde, 1st Earl of Clarendon, the King's chief adviser during his exile and for the first few years after the Restoration.

Carteret was sworn into the Privy Council, appointed Vice-Chamberlain of the Household, and constituted Treasurer of the Navy. [2] His career for the next decade is documented in the diary of Samuel Pepys, who joined him as Clerk of the Acts to the Navy Board in 1660. In 1667, he exchanged his office as Vice-Chamberlain with Lord Anglesey for that of Vice-Treasurer of Ireland, an office which he sold in 1669 for £11,000. [2] His influence seems to have been at its height in 1665, when he boasted to Pepys that the King did nothing without his knowledge; however, as the naval war dragged on, the Treasurer of the Navy was an obvious target of the opposition, and Pepys noted that by the spring of 1666 Carteret was being attacked on all sides. By the autumn of 1667, he confessed to Pepys that he was longing for the quiet of retirement. As Treasurer he was hard working and free from any suspicion of corruption, although his colleagues at the Navy Board complained that they found his accounts difficult to follow.

From 1661 to 1679 he represented Portsmouth, sponsored by the Admiralty, in the Cavalier Parliament. Although sitting on a number of committees he was a fairly inactive member of the house. [4]

The fidelity with which Carteret, like John Berkeley, 1st Baron Berkeley of Stratton, had clung to the royal cause, gave him also great influence at court: he was close to Clarendon, and to the Earl of Sandwich, whose daughter married Carteret's eldest son. He had, at an early date, taken a warm interest in the colonization of America. In recognition of all the help given to him during his exile in Jersey in the 1640s, Charles II gave Carteret a large grant of land previously named New Netherland, which was promptly renamed New Jersey under his charge. [5] With Berkeley, he became one of the proprietors of the Province of Carolina prior to their becoming jointly interested in East Jersey. Carteret County, North Carolina and town of Carteret, New Jersey are named after him, [2] and the city of Elizabeth, New Jersey, is named after his wife, [6] as is Elizabethtown, North Carolina. [7]

In 1665, Carteret was one of the drafters of the Concession and Agreement, a document that provided freedom of religion in the colony of New Jersey. It was issued as a proclamation for the structure of the government for the colony written by the two proprietors, Lord Berkeley and Sir George Carteret.

Carteret was signatory to "The Several Declarations of The Company of Royal Adventurers of England Trading into Africa". This document was published in 1667 by the Royal Africa Company, which attempted to form a monopoly on the transatlantic slave trade in the late 1660s. [8] [9] [10]

In 1669, he faced expulsion from the House of Commons for misconduct as Vice Chamberlain, being accused of embezzlement. [11] After a statement from the king expressing his satisfaction with Carteret and an acquittal by the House of Lords, the inquiry against him lapsed. He was, in fact, generally regarded as an honest man. [12]

In 1673, he was appointed one of the Lords of the Admiralty, and continued in the public service until his death on 14 January 1680.

Shortly before Carteret's death, the king proposed to give him the title Baron Carteret, but Carteret died too soon, so the honour was granted to his grandson George.

Samuel Pepys liked and admired Lady Carteret "the most kind lady in the world." [14]

In 2014, a constable of Saint Peter sought and received over £36,000 in public funds to build a sculpture of Carteret in Jersey to commemorate the 350th anniversary of the founding of New Jersey. [15]

In June 2020, following the killing of George Floyd and the widespread removal and destruction of monuments honoring slave traders around the world, the Carteret statue in Saint Peter was defaced with white paint due to his involvement with the Royal African Company. [16] One historian called the company Carteret funded "the single most prolific trader of slaves". [17] After calls from black residents of Jersey and others to put it in a museum were ignored, [18] the statue was defaced again in August with red paint and chains. [19] [20]