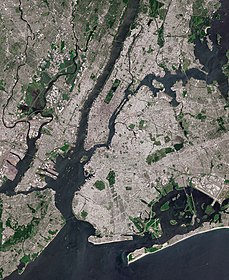 Satellite image showing most of the five boroughs, portions of eastern New Jersey, and the main waterways around New York Harbor

The geography of New York City is characterized by its coastal position at the meeting of the Hudson River and the Atlantic Ocean in a naturally sheltered harbor. The city's geography, with its scarce availability of land, is a contributing factor in making New York the most densely populated major city in the United States. Environmental issues are chiefly concerned with managing this density, which also explains why New York is among the most energy-efficient and least automobile-dependent cities in the United States. The city's climate is temperate. 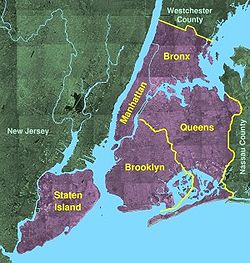 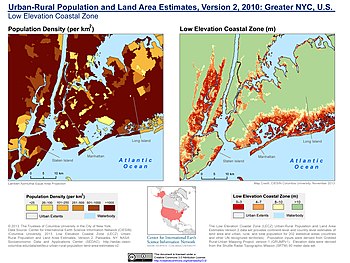 New York City is located on the coast of the Northeastern United States at the mouth of the Hudson River in southeastern New York state. It is located in the New York–New Jersey Harbor Estuary, the centerpiece of which is the New York Harbor, whose deep waters and sheltered bays helped the city grow in significance as a trading city. Much of New York is built on the three islands of Manhattan, Staten Island, and western Long Island, making land scarce and encouraging a high population density.

The boroughs of New York City straddle the border between two geologic provinces of eastern North America. Brooklyn and Queens, located on Long Island, are part of the eastern coastal plain. Long Island is a massive moraine which formed at the southern fringe of the Laurentide Ice Sheet during the last Ice Age. The Bronx and Manhattan lie on the eastern edge of the Newark Basin, a block of the Earth's crust which sank downward during the disintegration of the supercontinent Pangaea during the Triassic period. The Palisades Sill on the New Jersey shore of the Hudson River exposes ancient, once-molten rock that filled the basin. Tough metamorphic rocks underlie much of Manhattan, providing solid support for its many skyscrapers.

The city's land has been altered considerably by human intervention, with substantial land reclamation along the waterfronts since Dutch colonial times. Reclamation is most notable in Lower Manhattan with modern developments like Battery Park City. Much of the natural variations in topography have been evened out, particularly in Manhattan. [1] The West Side of Manhattan retains some hilliness, especially in Upper Manhattan, while the East Side has been considerably flattened. Duffy's Hill in East Harlem is one notable exception to the East Side's relatively level grade.

The city's land area is estimated to be 321 square miles (830 km2). [2] However, a more recent estimate calculates a total land area of 304.8 square miles (789.4 square kilometres). [3] The highest natural point in the city is Todt Hill on Staten Island, which at 409.8 ft (124.9 m) above sea level is the highest hill on the Eastern Seaboard south of Maine. The summit of the ridge is largely covered in woodlands as part of the Staten Island Greenbelt.

New York City comprises five boroughs, an unusual form of government used to administer the five constituent counties that make up the city. Throughout the boroughs there are hundreds of distinct neighborhoods, many with a definable history and character all their own. If the boroughs were each independent cities, four of the boroughs (Brooklyn, Queens, Manhattan, and the Bronx) would be among the ten most populous cities in the United States. 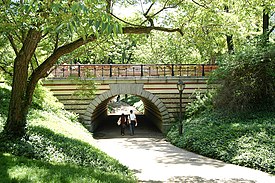 Central Park is nearly twice as big as the world's second-smallest country, Monaco. Historically its reservoirs were important components of the city's water supply.

New York City plays an important role in the green policy agenda because of its size. Environmental groups make large efforts to help shape legislation in New York because they see the strategy as an efficient way to influence national programs. New York City's economy is larger than Switzerland's, a size that means the city has potential to set new de facto standards. Manufacturers are also attuned to the latest trends and needs in the city because the market is simply too big to ignore.

Although cities like San Francisco or Portland, Oregon are most commonly associated with urban environmentalism in the United States, New York City's unique urban footprint and extensive transportation systems make it more sustainable than most American cities.