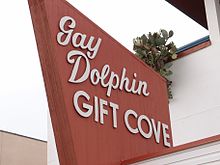 One of the signs outside the Gay Dolphin Gift Cove.

The Gay Dolphin Gift Cove is located at 910 North Ocean Boulevard in Myrtle Beach, South Carolina, United States, and calls itself "the nation's largest gift shop". [1] As of 2011, the Gay Dolphin had 26,000 square feet (2,400 m2) [2] and store owner Justin "Buz" Plyler said the store averaged 70,000 items. [3] Located in 50 sections called "coves", [4] including an Elvis Cove, [5] items include " sea shells, brushes for bald men and noisy seat cushions." [6] Larger items have included a fountain with three dolphins costing $7,000 and a life-size cigar store Indian. [6] Tom Pierce's Trader Bill's Shark's Tooth Cove rents space in the building. People can bring in their own shark teeth and have them made into jewelry. [7] [8]

Justin Whitaker Plyler and Eloise Plyler opened the Gay Dolphin in 1946; [3] [9] Justin Plyler Sr. "wanted a whimsical nautical name for his store", according to his son Buz, [6] born three years after the store opened. Hurricane Hazel in 1954 destroyed the original store, which was rebuilt on the same site, starting near the beach. Eventually, the store completed a six-story glass tower next to Ocean Boulevard. In the 1950s, the Plylers also ran an amusement park and a wildlife show. Buz Plyler, born in 1949, started working for his parents at age 8, doing the jobs his father disliked and eventually buying all of the store's merchandise. As of 2011, he has dealt with some sellers for fifty years. Plyler also purchases merchandise from bankrupt suppliers at a discount. [3] The Gay Dolphin was the first tourist-oriented store to stay open year-round. [10]

An annex used to be located across Ocean Boulevard, but it has been replaced by Ripley's Haunted Adventure. [11] A sign with wooden dolphins remains there, despite the city's efforts to have it removed. It went up in the 1970s but had to come down for Hurricane Hugo. Although a 1979 zoning law said such a sign could not be replaced even if taken down for repairs, it went back up in 1994. [12]

For many years, people could climb the circular steel steps to the top of the glass tower, at one time the city's tallest building, and see the view of Myrtle Beach from the roof. The cost was $1 as of 2000. However, persons unable to find their name on the wall of bicycle license plates could climb up without charge. Liability and insurance claim concerns put an end to the practice of climbing the tower in 2006. [8] [10] [13] [14]

At the end of Mr. Joe White Avenue, where Castaways Motel, Myrtle Beach National Wax Museum and two beachwear stores were located, a park was planned next to the ocean. In 2000, Myrtle Beach City Council had approved the purchase of 0.85 acres for the park, in exchange for several alleys near existing motels that planned expansions, plus cash. The buildings on the site had leases until 2002, after which they could be torn down. [19] [20] The park was dedicated to the elder Justin Plyler at the Sun Fun Festival on June 3, 2005. [9]

With the opening of the Boardwalk in 2010, Plyler Park became the location of a concert series called "Hot Summer Nights". [21] Myrtle Beach SkyWheel, the largest Ferris wheel in the eastern United States at the time of its construction, opened next to the park in 2011. [22] [23]