Gail June Edwards (born September 27, 1952) is an American former actress. She is known for her roles as Dot Higgins in ABC's It's a Living, Sharon LeMeure in NBC's Blossom, and Vicky Larson in ABC's Full House.

Edwards, a native Floridian, was raised in Coral Gables and caught the performing bug early in life. She had her father hang the curtain and lights while she choreographed, costumed, and starred in her own neighborhood musicals.

In the sixth grade, Edwards played Little Mary in The Women at the Coconut Grove Playhouse where famed theatre producer- playwright George Abbott came backstage to single out her performance. [1] This appearance became her launching pad for numerous industrial films and local television commercials in South Florida. 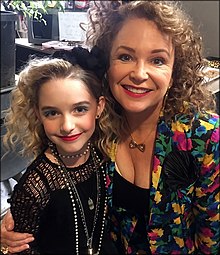 Upon moving to Los Angeles in 1976, Edwards signed with the Ro Diamond Agency (later with the Gersh Agency) and immediately began landing guest-star roles on such television series as Happy Days, Lou Grant, M*A*S*H and Taxi.

In 1979, Edwards auditioned for a Witt/Thomas production, in which she landed the role of Dot Higgins on ABC's It’s a Living. The series ran on ABC from 1980 to 1982 and was revived in first-run syndication from 1985 to 1989. Edwards, along with Barrie Youngfellow, Paul Kreppel, and the late Marian Mercer, were the only four members of the It's a Living cast who lasted during the network and syndicated runs. After ABC canceled the show in 1982, Edwards' management was informed by the producers of Happy Days that they were offering her the role of new character K.C. Cunningham, the niece of Howard and Marion Cunningham who was moving in with the family. Without informing Edwards of the offer, her management declined the opportunity, reportedly stating that they did not want Edwards "playing a new character on an old show". Crystal Bernard was then hired for the part. Edwards did not learn of the incident until many years later. In 1985, Edwards and Bernard wound up as co-stars on It's a Living, when the latter resumed production for first-run syndication.

Edwards also appeared in many movies-of-the-week during the 1980s, along with numerous other guest-star appearances in such series as Benson, Buffalo Bill, Doogie Howser, M.D., Knight Rider, Night Court and the premiere episode of Amazing Stories, directed by Steven Spielberg and original music/score by John Williams.

In 1990, Edwards was reunited with former Happy Days producers Thomas L. Miller and Robert L. Boyett, when she was cast as divorced mother Hilary Kozak on their single-season CBS sitcom The Family Man. Upon the series' cancellation in the summer of 1991, Edwards was asked by Miller and Boyett to join the cast of their hit ABC series Full House. They felt Edwards was right for the role of Vicky Larson, a talk show host who strikes up a relationship with Danny Tanner. Edwards made her Full House debut late that year, when the Vicky character first appeared as a substitute host for Rebecca Donaldson, who was on maternity leave, on (the fictional) Wake Up, San Francisco. Vicky and Danny soon embark on a long-term relationship and are engaged in the show's seventh season. Edwards' co-star on The Family Man, Scott Weinger, was transferred over to Full House along with her, playing Steve Hale, the high school boyfriend of D.J. Tanner.

During her tenure on Full House, Edwards also had the recurring guest role of Sharon LeMeure, the fast-talking mother of Six on NBC’s Blossom. Edwards' work on Blossom reunited her with former It's a Living producers Paul Junger Witt and Tony Thomas, who produced both series. [3] 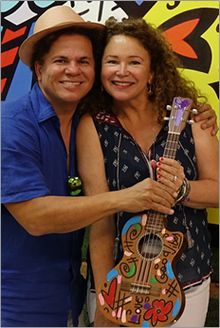 Edwards concluded her roles in Full House (with Vicky Larson having a mutual breakup with Danny Tanner) and Blossom in the spring of 1994. She retired from show business at that time and moved to the Southwest.

In September 2017, it was announced that Edwards would return to acting by reprising her role as Vicky Larson in the third season of the Full House sequel series Fuller House. [4] She appears in the Season 3 finale, "Here Comes the Sun". Edwards then made one final appearance in the series finale, "Our Very Last Show, Again". [5]

Edwards has used her celebrity to support/participate in many charities – one of which is performing for the Veterans Administration playing her ukulele that she learned just for this purpose. While in Miami, Edwards had an impromptu visit with Romero Britto who painted her ukulele, [6] for which she thanked him in song via YouTube. [7]