From Wikipedia, the free encyclopedia
Atoll in Hawaii

May, 2002 NASA picture of the French Frigate Shoals 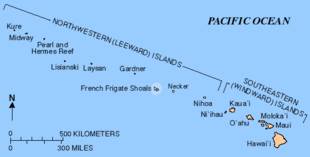 Location of the French Frigate Shoals 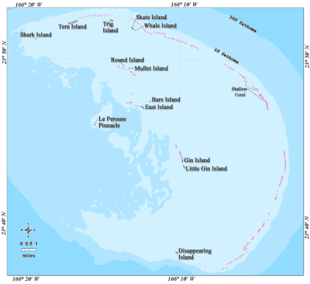 Map of the French Frigate Shoals

The French Frigate Shoals ( Hawaiian: Kānemilohaʻi) is the largest atoll in the Northwestern Hawaiian Islands. Its name commemorates French explorer Jean-François de La Pérouse, who nearly lost two frigates when attempting to navigate the shoals. It consists of a 20-mile (32 km) long crescent-shaped reef, twelve sandbars, and the 120-foot (37 m) high La Perouse Pinnacle, the only remnant of its volcanic origins. The total land area of the islets is 61.508 acres (24.891 ha). Total coral reef area of the shoals is over 232,000 acres (94,000 ha). Tern Island, with an area of 26.014 acres (10.527 ha), has a landing strip and permanent habitations for a small number of people. It is maintained as a field station in the Hawaiian Islands National Wildlife Refuge by the United States Fish and Wildlife Service. The French Frigate Shoals are about 487 nautical miles (902 km; 560 mi) northwest of Honolulu.

Although there is no evidence of extensive human activity or presence in the area, the earliest human visitors to the French Frigate Shoals probably came from the main Hawaiian Islands, which were settled by Polynesians between 1100 and 1300  CE. [1]

The Hawaiian island chain lay outside the routes followed by early European explorers, and it was not until La Pérouse's near-disastrous discovery that the shoals were known to the outside world. La Pérouse, aboard the frigate Boussole, was sailing westward from Monterey en route to Macau. During the night of 6 November 1786, sailors sighted breakers directly in their path, about a thousand feet ahead. Both the Boussole and her companion vessel, the frigate Astrolabe, were immediately brought about, passing within a few hundred feet of the breakers. At daybreak, the ships returned and mapped the southeastern half of the atoll, as well as finding the rock that would later be named after La Pérouse. La Pérouse named the shoals Basse des Frégates Françaises, the "Shoal of the French Frigates". [1]

During the late 19th century, American and European companies became interested in the possibility of mining guano in the Hawaiian Islands. U.S. Navy Lieutenant John M. Brooke, sailing on the naval schooner USS Fenimore Cooper, formally took possession of French Frigate Shoals for the United States on 14 January 1859, in accordance with the Guano Islands Act. In 1894, French Frigate Shoals, Kure Atoll, Midway Atoll, and Pearl and Hermes Reef were leased for 25 years by the Republic of Hawaii to the North Pacific Phosphate and Fertilizer Company; however, guano and phosphate deposits at French Frigate Shoals were found to be impractical to mine. The Republic did not formally claim possession of the shoals until 13 July 1895. [1]

French Frigate Shoals was included among the islands acquired by the United States on 7 July 1898, when Hawaii became a United States territory. In 1909 it was made a part of the Hawaiian Islands Bird Reservation.

In March 1942, Imperial Japanese Navy planners took advantage of the shoal's isolation to use its protected waters as an anchorage and refueling point for the long-range flying boats employed in their Operation K. The whole plan involving no less than 4 I type submarines of the Imperial Japanese Navy and 2 of their flying boats. Which stopped to refuel in the Shoals from two Imperial submarines, the I-15 and the I-19. In the aftermath of that attack, Commander, U.S. Pacific Fleet Chester W. Nimitz ordered a permanent United States Navy presence at the shoals. [2]

After the Battle of Midway, the United States Navy built a naval air station on Tern Island, enlarging the island sufficiently to support a 3,300-foot (1,000 m) landing strip; Tern Island now has a land area of 26.014 acres (10.527 ha). The station's main function was as an emergency landing site for planes flying between Hawaii and Midway Atoll. French Frigate Shoals Airport comprises what remains of the original seawall, coral and gravel runway, and buildings. [3]

The United States Coast Guard operated a LORAN navigation station on East Island until 1952, and Tern Island until 1979. At any one time, 15 to 20 military personnel were billeted to French Frigate Shoals. The LORAN station was staffed with USCG enlisted specialists such as Radioman, Electronic Technician, Fireman, Boatswain's Mates, other military occupational ratings. The commanding officer was typically a Lieutenant Junior Grade officer, the executive officer a chief petty officer enlisted rank. The Coast Guard designated the French Frigate Shoals billet as "isolated duty." Because of the billet's remoteness, a duty term was limited to one year. In December 1969 a tsunami devastated the islands, forcing the crew on Tern Island to evacuate the station, which was destroyed. The station was off air from 1 to 6 December. [4]

The United States Fish and Wildlife Service continues to maintain a permanent field station there. [5] In 2000, the atoll became part of the Northwestern Hawaiian Islands Coral Reef Ecosystem Reserve, which was incorporated into the Northwestern Hawaiian Islands National Monument in 2006. In 2009 the islands were evacuated during the approach of Hurricane Neki by landing a USCG C-130 on Tern's coral airstrip. [6]

In October 2018, Hurricane Walaka eroded away most of East Island, the second largest island of the French Frigate Shoals. [7] [8] 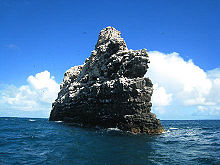 La Perouse Pinnacle, a rock outcrop in the center of the atoll, is the oldest and most remote volcanic rock in the Hawaiian chain. It stands 120 feet (37 m) tall and is surrounded by coral reefs. Because of its shape, the pinnacle is often mistaken for a ship from a distance. [9] [10]

Whale-Skate Island is a submerged island in the French Frigate Shoals. These islands suffered considerably from erosion starting in the 1960s, and by the late 1990s, Whale-Skate Island was completely washed over. [11]

The reef system at French Frigate Shoals supports 41 species of stony corals, including several species that are not found in the main Hawaiian Island chain. More than 600 species of marine invertebrates, many of which are endemic, are found there as well. [12]

More than 150 species of algae live among the reefs. Especially diverse algal communities are found immediately adjacent to La Perouse Pinnacle. This has led to speculation that an influx of additional nutrients – in the form of guano – is responsible for the diversity and productivity of algae in this environment. [12] The reef waters support large numbers of fish. The masked angelfish (Genicanthus personatus), endemic to the Hawaiian Islands, is relatively common there. Most of Hawaii's green sea turtles travel to the shoals to nest. The small islets of French Frigate Shoals provide refuge to the largest surviving population of Hawaiian monk seals, the second most endangered pinniped in the world. [5] 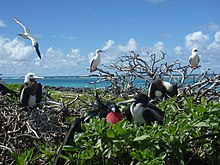 A three-week research mission in October 2006 by the National Oceanic and Atmospheric Administration (NOAA) led to the discovery of 100 species never seen in the area before, including many that are totally new to science. The French Frigate Shoals project is part of the Census of Coral Reef Ecosystems of the International Census of Marine Life. [15]

This table lists the islands of the French Frigate Shoals: