Fremont Street is a street in downtown Las Vegas, Nevada that is the most famous street in the Las Vegas Valley, and Nevada, besides the Las Vegas Strip. Named in honor of explorer John Charles Frémont and located in the heart of the downtown casino corridor, Fremont Street is today, or was, the address for many famous casinos such as Binion's Horseshoe, Eldorado Club, Fremont Hotel and Casino, Golden Gate Hotel and Casino, Golden Nugget, Four Queens, The Mint, and the Pioneer Club. 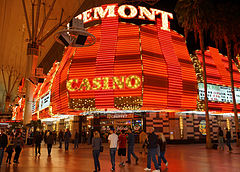 Prior to the construction of the Fremont Street Experience, the western end of Fremont Street was the representative scene for Las Vegas that was included in virtually every television show and movie that wanted to depict the glittery lights of Las Vegas. The abundance of neon signs, like cowboy Vegas Vic, earned the street the nickname of "Glitter Gulch".

Fremont Street is designated between Main Street and Sahara Avenue in a northwest–southeast direction, although auto traffic actually begins at Las Vegas Boulevard. At Sahara, it leaves Las Vegas proper and continues as Boulder Highway. Fremont Street formerly carried several national highways, including U.S. Route 93 (US 93), US 95, and US 466. US 93 and US 95 have been rerouted along Interstate 515, while US 466 has been decommissioned. The section of Fremont Street east of the Fremont East District is currently designated Nevada State Route 582.

Although prostitution has been illegal in Clark County since 1971, [1] the street has a reputation for prostitution. [2]

Fremont Street dates back to 1905, when Las Vegas itself was founded. Fremont Street was the first paved street in Las Vegas in 1925 [3] and received the city's first traffic light in 1931. [4] Fremont Street also carried the shields of U.S. Route 93 (US 93), US 95, and US 466 before the construction of the interstate freeways, including I-15.

While gambling was established prior to being legalized, the Northern Club in 1931 received one of the first 6 gambling licenses issued in Nevada, and the first one for Fremont Street.

Glitter Gulch on Fremont Street, was closed to vehicle traffic in September, 1994, to begin construction on the Fremont Street Experience. 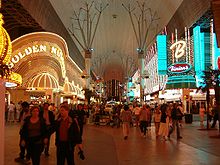 The Golden Nugget and Binion's casinos at night 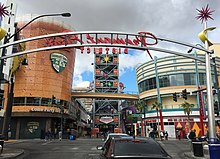 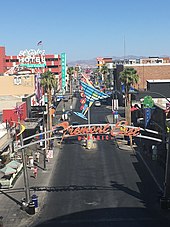 In 2002 the city of Las Vegas created the Fremont East Entertainment District (FEED), an entertainment district in the heart of downtown Las Vegas. [7] In 2004 the city announced plans to redevelop a three block section of Fremont Street east of the Fremont Street Experience as an arts and entertainment area within FEED. The $5.5 million streetscape improvement project was a public private partnership with 50% paid by landlords via new businesses and 50% paid with tax dollars as part of a plans to revitalize Downtown Las Vegas. [8] The area was redesigned to increase the draw to downtown, with a compact entertainment area of bars and clubs. [9] [10]

Currently, the Fremont East Entertainment District comprises a total of six blocks. The boundaries are from Las Vegas Boulevard East to 8th Street, and then from Ogden Street South to Carson. [7] The historic El Cortez hotel and casino are within the district as well as the staple cocktail bar Downtown Cocktail Room . Beyond this district on Fremont businesses include The Writer's Block and the bulk of Tony Hsieh's Downtown Project.