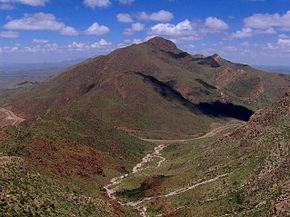 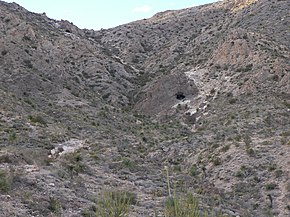 Caves on the Ron Coleman Trail

Franklin Mountains State Park is a Texas state park in El Paso, Texas, in the United States. Park headquarters are located at an elevation of 5,426 feet (1,654 m) with the highest peak reaching 7,192 feet (2,192 m). [1] It is one of the largest urban parks in the nation lying completely within city limits, covering 24,247.56 acres (9,813 ha). [2] Franklin Mountains State Park is open year-round for recreational hiking, mountain biking, picnicking and scenic driving and vistas.

Native Americans and other travelers have used the natural resources in the Franklin Mountains when crossing the gap between the Franklin Mountains and the Juarez Mountains that is now Ciudad Juárez across the Rio Grande in Mexico and El Paso. Pictograms and mortar pits confirm a human presence in the mountains dating back more than 12,000 years. [2]

The Franklin Mountains are most likely named after Benjamin Franklin Coons, who in 1849 purchased a ranch in what is now El Paso. At first known as Coons Ranch, by 1851 the settlement took on Coons' middle name and was called Franklin. [3] Despite the town being officially named El Paso in 1852, the locals continued to call it Franklin throughout the 1850s. [4]

The El Paso Tin Mining and Smelting Company operated a tin mine on the northeast slope of North Franklin Mountain from 1909 to 1915. While the mine had the distinction of being the only tin mine ever located in the U.S., it was an economic failure. [2] [5]

Efforts to grant protected status to the Franklin Mountains began as early as 1925. A real estate developer sought to build housing on the mountains and in 1979 he built a road up into them. A local organization known as the Wilderness Park Coalition was able to convince the Texas Legislature to protect the mountains in 1979. Despite this success the legislature, in the same bill, prohibited funding for the development, operation and maintenance of the park. [6] The property was formally acquired in 1981. [2] Changes to the legislation were made in 1985 when a plan for park development was established [6] and the park was opened to the public in 1987. [2]

The Franklin Mountains are 23 miles (37 km) long and 3 miles (4.8 km) wide and stretch from El Paso into New Mexico. [7] The Franklins were formed due to crustal extension related to the Cenozoic Rio Grande rift. Although the present topography of the range and adjoining basins is controlled by extension during rifting in the last 10 million years, faults within the range also record deformation during the Laramide orogeny, between 85 and 45 million years ago. [7]

Franklin Mountains State Park is part of the Chihuahuan Desert. The plants and wildlife found in the park, despite it being within a city, are typical of those found throughout the rest of the desert. Barrel cactus, yucca, Mexican and California poppies are common plants. [2] Trees like cottonwood, hackberry, juniper and oak grow along the springs on the mountain slopes. [5] Mammals in the park include mule deer, mountain lions, ring-tailed cat and a variety of rodents. [2] [5] Birds observed at the park included golden eagles, owls, hawks, and a wide variety of smaller birds. [2]

Franklin Mountains State Park is open for year-round recreation. Development of the park is limited and much of the land is far from paved access roads and parking areas. Two hiking trails can be accessed from Woodrow Bean Transmountain Drive. Plans for a network of 100 miles (160 km) of hiking trails are under consideration. [2] Rock climbing is permitted in the park and well established climbing areas are located in McKelligon Canyon The park headquarters is also located in McKelligon Canyon. Five camping areas are found in the Tom Mays Unit of the park with picnic facilities. [2]

The Wyler Aerial Tramway is an aerial tramway operated by the Texas Parks and Wildlife Department and is located in the Franklin Mountains State Park. The tram is closed to public as of Sept. 2018. The tramway complex covers 196 acres (0.79 km2) on the east side of the Franklin Mountains. The gondolas travel along two 2600 foot 1 3/8" diameter steel cables to Ranger Peak, 5,632 feet (1,717 m) above sea level. The trip takes about four minutes and lifts riders up 940 vertical feet above the boarding area.