Bartholdi was born in Colmar, France, 2 August 1834. [3] He was born to a family of German Protestant ( Alsatian) heritage, with his family name romanticized from Barthold. [4] His parents were Jean Charles Bartholdi (1791–1836) and Augusta Charlotte Bartholdi ( née Beysser; 1801–1891). Frédéric Auguste Bartholdi was the youngest of their four children, and one of only two to survive infancy, along with the oldest brother, Jean-Charles, who became a lawyer and editor.[ citation needed]

Bartholdi's father, a property owner and counselor to the prefecture, died when Bartholdi was two years old. [4] Afterwards, Bartholdi moved with his mother and his older brother Jean-Charles to Paris, where another branch of their family resided. [4] With the family often returning to spend long periods of time in Colmar, [4] the family maintained ownership and visited their house in Alsace, which later became the Bartholdi Museum. While in Colmar, Bartholdi took drawing lessons from Martin Rossbach. In Paris, he studied sculpture with Antoine Étex. He also studied architecture under Henri Labrouste and Eugène-Emmanuel Viollet-le-Duc. [4]

Bartholdi attended the Lycée Louis-le-Grand in Paris, and received a baccalauréat in 1852. He then went on to study architecture at the École nationale supérieure des Beaux-Arts[ citation needed] as well as painting under Ary Scheffer [3] [4] in his studio in the Rue Chaptal, now the Musée de la Vie Romantique.[ citation needed] Later, Bartholdi turned his attention to sculpture, which afterward exclusively occupied him and his life. [3]

Early sculptures and work in Colmar 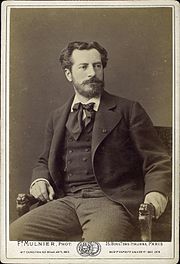 Bartholdi early in his career.

In 1853, Bartholdi submitted a Good Samaritan-themed sculptural group to the Paris Salon of 1853. The statue was later recreated in bronze. Within two years of his Salon debut, Bartholdi was commissioned by his hometown of Colmar to sculpt a bronze memorial of Jean Rapp, a Napoleonic General. [4] In 1855 and 1856 Bartholdi traveled in Yemen and Egypt with travel companions such as Jean-Léon Gérôme and other "orientalist" painters. The trip sparked Bartholdi's interest in colossal sculpture. [4]

In 1869, Bartholdi returned to Egypt to propose a new lighthouse to be built at the entrance of the Suez Canal, which was newly completed. The lighthouse, which was to be called Egypt Carrying the Light to Asia and shaped as a massive draped figure holding a torch, was not commissioned. [4] Both the khedive and Lessups declined the proposed statue from Bartholdi, citing the expensive cost. [5] The Port Said Lighthouse was built instead, by François Coignet in 1869.

The war and Statue of Liberty

Bartholdi sculpting. To the left is a miniature of Liberty Enlightening the World.

Bartholdi served in the Franco-Prussian War of 1870 as a squadron leader of the National Guard, and as a liaison officer to Italian General Giuseppe Garibaldi, representing the French government and the Army of the Vosges.[ citation needed] As an officer, he took part in the defense of Colmar from Germany. Distraught over his region's defeat, over the following years he constructed a number of monuments celebrating French heroism in the defense against Germany. Among these projects was the Lion of Belfort, which he started working on in 1871, not finishing the massive sandstone statue until 1880. [4]

In 1871, he made his first trip to the United States, where he pitched the idea of a massive statue gifted from the French to the Americans in honor of the centennial of American independence. The idea, which had first been broached to him in 1865 by his friend Édouard René de Laboulaye, resulted in the Statue of Liberty in New York harbor. [4] After years of work and fundraising, the statue was inaugurated in 1886. [4] During this period, Bartholdi also sculpted a number of monuments for American cities, such as a cast-iron fountain in Washington, DC completed in 1878. [4]

In 1875, he joined the Freemasons Lodge Alsace-Lorraine in Paris. [6] In 1876, Bartholdi was one of the French commissioners in 1876 to the Philadelphia Centennial Exposition. There he exhibited bronze statues of The Young Vine-Grower, Génie Funèbre, Peace and Genius in the Grasp of Misery, receiving a bronze medal for the latter. [3] His 1878 statue Gribeauval became the property of the French state. [3]

A prolific creator of statues, monuments, and portraits, Bartholdi exhibited at the Paris Salons until the year of his death in 1904. [4] He also remained active with diverse mediums, including oil painting, watercolor, photography, and drawing, [4] and received the rank of Commander of the Legion of Honor in 1886. Bartholdi died of tuberculosis at age 70 in Paris on 4 October 1904.[ citation needed]

In 1876, he married Jeanne-Emile Baheux in Providence, Rhode Island. [4] Throughout his life Bartholdi maintained his childhood family home in Colmar; in 1922, it was made into the Musée Bartholdi. [4]

The Statue of Liberty

The work for which Bartholdi is most famous is Liberty Enlightening the World, better known as the Statue of Liberty. Soon after the establishment of the French Third Republic, the project of building some suitable memorial to show the fraternal feeling existing between the republics of the United States and France was suggested, and in 1874 the Union Franco-Américaine (Franco-American Union) was established by Edouard de Laboulaye. [3] Bartholdi's hometown in Alsace had just passed into German control in the Franco-Prussian War. These troubles in his ancestral home of Alsace are purported to have further influenced Bartholdi's own great interest in independence, liberty, and self-determination.[ citation needed] Bartholdi subsequently joined the Union Franco-Américaine, among whose members were Laboulaye, Paul de Rémusat, William Waddington, Henri Martin, Ferdinand Marie de Lesseps, Jean-Baptiste Donatien de Vimeur, comte de Rochambeau, Oscar Gilbert Lafayette, [3] François Charles Lorraine, and Louis François Lorraine.[ clarification needed] 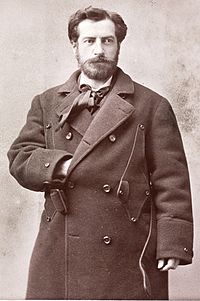 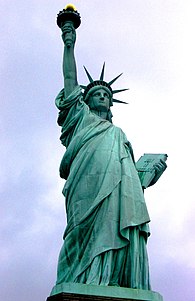 The Statue of Liberty

Bartholdi broached the idea of a massive statue and once its design was approved, the Union Franco-Américaine raised more than 1 million francs throughout France for its building. [3] In 1879, Bartholdi was awarded design patent U.S. Patent D11,023 for the Statue of Liberty.[ clarification needed] On 4 July 1880, the statue was formally delivered to the American minister in Paris, the event being celebrated by a great banquet. [3] In October 1886, the structure was officially presented as the joint gift of the French and American people, and installed on Bedloe's Island in New York Harbor . [3] It was rumored in France that the face of the Statue of Liberty was modeled after Bartholdi's mother. [7] The statue is 151 feet and 1 inch high, and the top of the torch is at an elevation of 305 feet 1 inch from mean low-water mark. [8] It was the largest work of its kind that had been completed up to that time. [3]

Bartholdi's hometown Colmar (modern political administrative region of Grand Est) has a number of statues and monuments by the sculptor, as well as a museum founded in 1922 in the house in which he was born, at 30 Rue des Marchands. 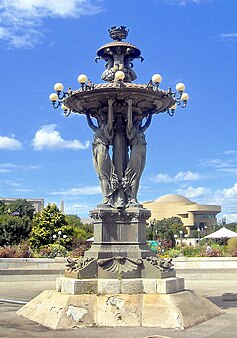 Bartholdi's other major works include a variety of statues at Clermont-Ferrand; in Paris, and in other places. Notable works include:

The Statue of Liberty is a 1985 documentary film by Ken Burns which focuses on the statue's history and its impact on society.

Bartholdi's life and creation of Liberty Enlightening the World are also featured in the 2019 documentary film, Liberty: Mother of Exiles.