From Wikipedia, the free encyclopedia
US Army post near Grovetown, GA, USA

Fort Gordon, formerly known as Camp Gordon, is a United States Army installation established in October 1941. It is the current home of the United States Army Signal Corps , United States Army Cyber Corps, and Cyber Center of Excellence. It was once the home of The Provost Marshal General School and Civil Affairs School. The fort is located southwest of the city Augusta, Georgia. One of the major components of the installation is Advanced Individual Training for Signal Corps military occupational specialties. In 1966–68 the Army's Signal Officer Candidate School (located at Fort Monmouth during World War II and the Korean War) graduated over 2,200 Signal officers. Signals Intelligence has become more visible and comprises more and more of the fort's duties.

It is named after John Brown Gordon, a Major General in the Confederate States Army during the Civil War. [1]

The United States Army established many war-training camps during World War I. Chamblee, northeast of Atlanta, was selected for one of the state's largest army cantonments. It was named Camp Gordon in honor of John Brown Gordon, who was a major general in the Confederate army, a Georgia governor, a U.S. senator, and a businessman. The camp opened in July 1917, becoming a training site and home of the famous 82nd Division. [2] The division was composed of men from several different states, but men from Georgia made up almost half its number. Among the men trailed at Camp Gordon, during that period, was the future Congressional Medal of Honor recipient Alvin York. [3] This camp was in operation until the sale of real estate and buildings was ordered in 1920. It was abandoned in September 1921. During WWI the US Army Camp Hancock was located in Augusta, Georgia in the general vicinity of the current Daniel Field. Camp Hancock was the home of the 28th Infantry Division from Pennsylvania. Camp Hancock was abandoned and turned over to a caretaker detachment March 27, 1919. From 1919 until 1941, there was no army installation named Camp Gordon in existence, nor was there an installation located near Augusta, Georgia. [4] [5] [6]

Camp Gordon was approved as the name for a WWII division training camp which began construction in July 1941. The U.S. War Department approved a contract to construct facilities on a new training area near Augusta, in Richmond County, Georgia that had been selected several months earlier. A groundbreaking and flag-raising ceremony took place in October. In response to the attack on Pearl Harbor Colonel Herbert W. Schmidt, camp commander, moved his small staff from his temporary office in the Augusta post office building to the unfinished headquarters building at Camp Gordon on 9 December 1941 and the 4th Infantry Division began to establish operations there.

The post was home to three divisions during the war; the 4th Infantry, the 26th Infantry, and the 10th Armored. From October 1943 to January 1945 Camp Gordon served as an internment camp for foreign prisoners of war. From May 1945 until April 1946 the U.S. Army Personnel and Separation Center processed nearly 86,000 personnel for discharge from the Army. [7] 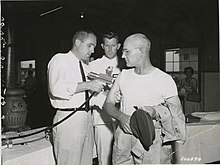 From early 1946 to June 1947, the U.S. Army Disciplinary Barracks for convicted criminals was located at Camp Gordon, and the installation was scheduled for deactivation. In September 1948 the Army relocated the Military Police School from Carlisle Barracks, Pennsylvania, to Camp Gordon, and in October 1948 a Signal Corps training center was activated.

During the Vietnam War, Fort Gordon was home to Camp Crockett, an area of the post conducting 9-week advance airborne infantry training courses for soldiers in line to attend the remaining 3 weeks of Airborne training at Fort Benning, Georgia, and then be assigned to Airborne units in Vietnam. The location closed as the war ended and today the site is overgrown with pine trees. [8] Between 1966 and 68, approximately 2,200 Signal Officers were trained at Fort Gordon's Signal Officer Candidate School (OCS), before all US Army branch OCSs were merged with the Infantry OCS at Fort Benning. Until 1974 Ft. Gordon was also a training location for the Military Police Corps, located in the World War II wooden barracks corridor between Brainard Ave. and Avenue Of The States, and in the Brems Barracks area of the fort.

During the 1950s and into the 1970s Fort Gordon served as a basic training facility under the US Third Army. In 1974 the Army moved its main Signal School from Ft. Monmouth NJ to Ft. Gordon to consolidate all signal training in one location. The activity was designated the US Army Signal Center and Fort Gordon. At the same time, the Army moved the MP School to Ft. McClellan AL and the Civil Affairs School to Ft. Bragg NC. Since June 1986 Fort Gordon has been the home of the Signal Corps Regiment, the branch of the U.S. Army responsible for providing and maintaining information systems and communication networks. The US Army Signal School's primary purpose is to conduct specialized instruction for all Signal Corps military and civilian personnel. During the 1990s the post served as a home for deployable Signal and Military Intelligence units as well. The other major activity was health care, to include a Dental Lab along with a major Army Hospital, Dwight D. Eisenhower Medical Center. Fort Gordon is a diversified post where army Signal, Military Intelligence, Medical and now Cyber are housed. The senior mission partner however remains the US Army Cyber Center of Excellence.

In October 2016, Fort Gordon marked its 75th year as a continuous active US military installation near Augusta, GA. In 2018, the Installation Management Command became part of the Army Material Command and the installation facilities now belongs to AMC, with the TRADOC Cyber Center of Excellence commander serving as the senior mission partner in addition to his TRADOC duties of education and training. 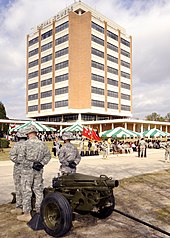 Fort Gordon's official name is the U.S. Army Cyber Center of Excellence & Fort Gordon, or CyberCoE&FG. While the TRADOC school itself is a major function, the post is home to the following active-duty tenant units:

Fort Gordon has approximately 30,000 military and civilian employees and currently has an estimated $1.1 billion economic impact on the Augusta-Richmond County economy.

Fort Gordon is home to the US Army Signal and Cyber Schools. [10] The Signal school focuses primarily on communications technology that is currently being utilized by the United States Army to provide the DODIN or Department of Defense Information Network, the platform for cyberspace operations. One MOS or Military Operational Specialty that is currently being trained at Fort Gordon by the Signal School are the Signal Support System Specialists whose MOS designation is 25U or 25 Uniform. Soldiers that can perform both Signal and Cyber related jobs are in high demand throughout the army and because of this Fort Gordon has a steady stream of soldiers training on base in those disciplines. [11]

Due to increases in the need and use of cyber technology the US Army decided to consolidate the United States Army Cyber Command into one location. Fort Gordon along with Fort George Meade were in the running to receive the command. [12] In December 2013 it was announced that Fort Gordon was selected. [13] 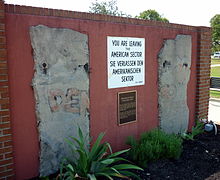 Fort Gordon's display of sections of the Berlin Wall

In Freedom Park, located off Rice Road, across from Barton Field, is a display of two sections of the Berlin Wall, as well as a sign from the wall. [14]