Origin of the leather subculture 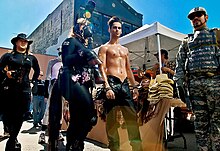 A mixture of kink and leather subcultures mix at the festival. The man on the right may be into uniform and military interests while these other 2007 fair-goers seem to be interested in animal roleplay including a bare-chested man with his "pony".

Although sadomasochism has been practiced for many centuries, the modern gay leather scene in the United States developed beginning in 1945 when thousands of gay servicemen were given blue discharges from service after World War II and came to the major port cities of the United States to live in gay ghettos. In 1953, the Marlon Brando film The Wild One appeared, and some butch gays began to imitate Brando by wearing black leather jackets, a black leather cap, black leather boots and jeans and, if they could afford it, by also riding motorcycles. [9] In the 1950s, the magazine Bizarre familiarized people with sexual fetishism.

History of the leather community in San Francisco 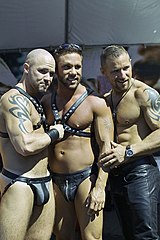 The first proto-leather bar in San Francisco was the Sailor Boy Tavern, which opened in 1938 near the Embarcadero YMCA and catered to U.S. Navy infantry looking for same-sex sexual encounters. [9]

Folsom Street has been the center of San Francisco's men's leather community since the mid-1960s. Before centering in the South of Market neighborhood, leather friendly bars were located in the Embarcadero (Jack's On The Waterfront at 111 Embarcadero 1952-1963, On The Levee ?-1972), and the Tenderloin (The Spur Club at 126 Turk - raided and closed in 1959, The Why Not at 518 Ellis - opened and closed in 1960, The Hideaway at 438 Eddy - raided and closed in 1961). The first leather bar in SOMA was the Tool Box, a gay leather bar which opened in 1961 at 339 4th St and closed in 1971. [10] It was made famous by the June 1964 Paul Welch Life article entitled "Homosexuality In America," the first time a national publication reported on gay issues. Life 's photographer was referred to the Tool Box by Hal Call, who had long worked to dispel the myth that all homosexual men were effeminate. The article opened with a two-page spread of the mural of life size leathermen in the bar, painted by Chuck Arnett, a patron and employee. [11] The article described San Francisco as "The Gay Capital of America" and inspired many gay leathermen to move there. [10]

The first leather bar on Folsom Street was Febe's, on the southwest corner of 11th and Folsom, which opened July 25, 1966. The Stud bar, which opened in 1966 at 1535 Folsom St., was a gay leather bar that was also originally a Hell's Angels hangout; by 1969 it had become a dance bar for hippies on the margins of the leather scene and had a psychedelic black light mural by Chuck Arnett (in 1987, it moved to 399 9th St. at Harrison). In 1967 A Taste of Leather, one of the first in-bar leather stores, was established at Febe's by Nick O'Demus. As of late 2009, A Taste of Leather announced it would be going out of business after 43 years. 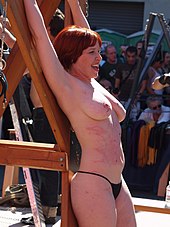 The predecessor of the Folsom Street Fair was the CMC Carnival (California Motorcycle Club Carnival), a gay leather BDSM dance (with DJs and a rock band) and fair, with vendors and a back room for casual sex. It was held on the second Sunday of November every year from 1966 to the last one in 1986 at various indoor venues including most often at the Seafarer's International Union Hall (referred to as Seaman's Hall for short) at 350 Fremont Street in the Embarcadero area of SOMA. In the early 1970s, the CMC Carnival was attended by a few hundred people and by the time of the last large CMC Carnival in 1982 at what was then the Yellow Cab Building at Jones and Turk in the Tenderloin, it was attended by over 4,000 people. [13] [14]

These gay motorcycle clubs also organized many benefits for charity at various leather bars. During the 1970s and early 1980s one could see many dozens of motorcycles belonging to people who were members of these clubs parked up and down the length of Folsom Street on the Miracle Mile. The membership of these motorcycle clubs was decimated by the AIDS crisis beginning in 1982. [16]

Some leather people of the 1960s and 1970s felt that one wasn't really a leather person but just a poseur unless one owned an actual motorcycle, preferably a Harley Davidson. [18]

The San Francisco South of Market Leather History Alley consists of four works of art along Ringold Alley honoring leather culture; it opened in 2017. [19] [20] The four works of art are: A black granite stone etched with a narrative by Gayle Rubin, an image of the "Leather David" statue by Mike Caffee, and a reproduction of Chuck Arnett's 1962 mural from the Tool Box, a gay leather bar, engraved standing stones that honor community leather institutions including the Folsom Street Fair, leather pride flag pavement markings through which the stones emerge, and metal bootprints along the curb which honor 28 people who were an important part of the leather communities of San Francisco. [20]

Beginnings of the Folsom Street Fair

The community had been active in resisting the city's ambitious redevelopment program for the South of Market area throughout the 1970s. City officials had wanted to "revitalize" the historically blue collar, warehouse, industrial district by continuing successful high rise development already underway on Rincon Hill.

But as the AIDS epidemic unfolded in the 1980s, the community's relative autonomy from City Hall was dramatically weakened. The crisis became an opportunity for the city (in the name of public health) to close bathhouses and regulate bars, which they did beginning in 1984. [21]

As these establishments for the leather community were rapidly closing, a coalition of housing activists and community organizers decided to start a street fair. The fair would enhance the visibility of the community, provide a means for much-needed fundraising, and create opportunities for members of the leather community to connect to services and vital information (e.g., regarding safer sex) that bathhouses and bars might otherwise have been situated to distribute. [21]

Thanks to the success of the first Folsom Street Fair, the organizers created the Up Your Alley Fair on Ringold Street in 1985. This fair moved to Dore Street ("Dore Alley") between Howard and Folsom in 1987.

Street photographer Michael Rababy says that a century of artists and poets are being replaced by algorithmicists and trust-fund hipsters, but as the millennium tower sinks, the Folsom Street Fair stands its ground. [22] 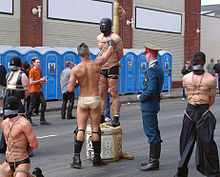 Bondage demonstration with Van Darkholme at the 2003 Folsom Street Fair 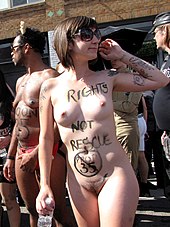 A woman uses her body to demonstrate for sex workers' rights.

As one of the few occasions when sadomasochistic activities are encouraged and performed in public, it attracts a considerable number of sightseers and those who enjoy the attention of onlookers as well as hundreds of photographers and videographers. Although the costumes and activities are frequently transgressive, many people come together at the food court [23], many attendees find the event "eye-opening" and positive. [24] On the other hand, the event has at times drawn public and internal criticism for its bawdy atmosphere and broad tolerance of lewd behavior, [25] [26] and it is a regular target for anti-gay organizations such as Americans for Truth about Homosexuality. [27]

The organizers have reportedly earned a great amount of trust from city officials as they have demonstrated not only an exceptional level of community and volunteer support, but also have risen to be a role-model for other street fairs in San Francisco which have faced opposition from various neighborhood groups. With the assistance of the high-profile Sisters of Perpetual Indulgence, the gate donations totaled more than $300,000 in 2006 and the methodology emulated at other street fairs like the Sisters' Pink Saturday, the Castro Street Fair and San Francisco Lovefest.

The fair claims it draws 250,000 visitors annually, [5] including leather fetishists from around the world, and is the third-largest street event in California, after the Tournament of Roses Parade and San Francisco Pride parade. [28] [29] Each year, net proceeds from Folsom Street Fair, including gate donations and beverage sales, are given to qualified local charities ("beneficiaries"). These include charities working in public health, human services, and the arts, as well as beverage partners, and the Sisters of Perpetual Indulgence who lead the organizing effort at the gates. The event regularly generates over $300,000 annually for charity. [30] Money raising events also include a charity spanking booth, live BDSM demonstrations and a twister stage. 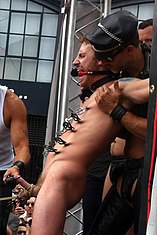 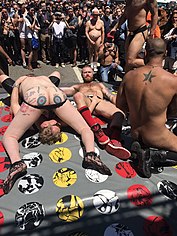 Folsom Europe was established in Berlin, Germany in 2003 in order to bring the non-profit leather festival concept pioneered by the Folsom Street Fair in San Francisco to Europe. [32]

The Toronto version of Folsom Street Fair was dubbed Folsom Fair North, FFN or FFNTO, [33] and was held annually in July from 2003, until it was canceled permanently in 2008. 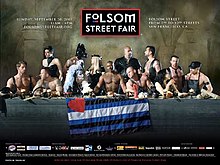 The official poster for the 2007 Folsom Street Fair

From a press release about the poster, Andy Copper, Board President of Folsom Street Events, a non-profit organization, stated, "There is no intention to be particularly pro-religion or anti-religion with this poster; the image is intended only to be reminiscent of the 'Last Supper' painting. It is a distinctive representation of diversity with women and men, people of all colors and sexual orientations" [38] and "We hope that people will enjoy the artistry for what it is - nothing more or less. Many people choose to speculate on deeper meanings. The irony is that da Vinci was widely considered to be homosexual. In truth, we are going to produce a series of inspired poster images over the next few years. Next year's poster ad may take inspiration from ' American Gothic' by Grant Wood or Edvard Munch's ' The Scream' or even ' The Sound of Music'! I guess it wouldn't be the Folsom Street Fair without offending some extreme members of the global community, though."

The Catholic League, Concerned Women for America and the Family Research Council targeted the largest mainstream sponsor of the event, Miller Brewing Company, threatening to boycott their products for the company's support of the event and allowing its logo to appear in the ad. [39] [40] Miller asked for its logo to be removed from the poster with a statement on its website: "While Miller has supported the Folsom Street Fair for several years, we take exception to the poster the organizing committee developed this year. We understand some individuals may find the imagery offensive and we have asked the organizers to remove our logo from the poster effective immediately." [41] The Catholic League dropped the boycott within a month [42] with no evidence of Miller's sales being affected.

Nancy Pelosi, Speaker of the United States House of Representatives who represents San Francisco and who is also Roman Catholic, fielded a question on this image as part of her Friday morning press conference. [35] She responded,

It's a Constitutional question. It's a religious question. It's about as global a question as you could ask ... I'm a big believer in the First Amendment. I do not believe Christianity has been harmed by the Folsom Street Fair. [43]

In 2018, Delancey Street Press published the Folsom Street Food Court [44], with images captured by Michael Rababy. The book is a documentary photography monograph that captures San Francisco's infamous Folsom Street Fair. The unguarded images feature people in various states of dress and undress in the rarely photographed street fair food court. The book documents two years shot a decade apart, 2007 and 2017, to demonstrate that although the city of San Francisco has gentrified over time, the Folsom Street Fair seems to maintain it’s authenticity.