SR 417 was originally planned to be a full beltway around Orlando. Eventually, the beltway was divided, with the west side being designated SR 429, and the east side retaining the SR 417 designation. The two expressways will be non-continuous, until circa 2022, when SR 429 will be extended via Wekiva Parkway to meet SR 417 in the Sanford/Heathrow area.

The Southern Connector as well as the beltway begins at an interchange with Interstate 4 in Celebration. This section, run by Florida's Turnpike Enterprise is 6.4-mile-long (10.3 km), extending to the International Drive interchange. [3]

Between the International Drive interchange and the Orange– Seminole county line, the tollway is known as the Central Florida GreeneWay, and is operated by CFX.

The Seminole Expressway section of the tollway begins at the county line. This section, also run by Florida's Turnpike Enterprise is 17-mile-long (27 km), extends to an interchange with I-4 in Sanford at the end of the beltway. [4]

Phase I: The Eastern Beltway 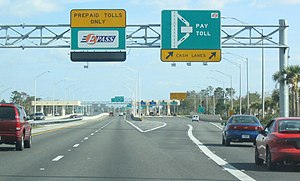 The first phase of SR 417, then termed the Eastern Beltway, extended from the current east end of the East–West Expressway northward to SR 426 (Aloma Avenue) in Seminole County. It allowed commuters to bypass the crowded Semoran Boulevard, as well as give expressway access to the University of Central Florida. 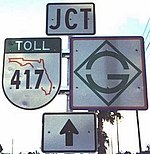 Phase II, the "Southeastern Beltway", was considered one of the most important parts of the Eastern Beltway because motorists could use this portion to travel from downtown Orlando to the Orlando International Airport without ever getting off the expressway system. This portion of the GreeneWay had passed through some of the most barren portions of Orange County. It skirts the Econlockhatchee River marshes that cover some of eastern Orange and northern Osceola.

The OOCEA began construction of the Southeastern Beltway, from Colonial Drive to the Beachline Expressway in January 1989, and opened ahead of schedule in July 1990. The 7.6-mile (12.2 km) route cost $72 million, with an estimated $13 million being spent on acquiring the right-of-way.

The "Southern Connector" was to become a route extending from SR 528 all the way to SR 535. The OOCEA began construction of the 22-mile (35 km) road in November 1991 and completed construction July 1, 1993, at a cost of $273 million. It was during the construction of this section that the entire beltway project was renamed the Central Florida GreeneWay. From 2015 through 2016, a limited interchange was completed with SR 417 and Florida's Turnpike. As of 2017, motorists traveling on SR 417 in either direction can exit onto Florida's Turnpike in both northbound and southbound directions, but only motorists on Florida's Turnpike northbound are able to exit onto SR 417, and only onto the northbound direction of SR 417. However, construction has begun as of late 2017 to complete the originally planned fully directional interchange.

The original logo for the Seminole County Expressway

The initial stretch, from just south of Aloma to US 17/ 92 opened in phases in 1994. The final six miles (10 km) connect to Interstate 4 near Sanford/ Lake Mary, and opened to traffic on September 15, 2002, approximately seven months ahead of the final schedule. This leg features only one mainline toll plaza (just south of CR 427), but it is also the priciest toll plaza on SR 417 at $2.50 per vehicle. This section also features the only "free movement" on SR 417. No toll is collected for motorists traveling between I-4 and Rinehart Road (whose interchange with SR 417 is used for travelers on SR 46 and CR 46A to get to and from SR 417).

Due to the multiple entities involved, which included OOCEA, Walt Disney World, Osceola County, private landowners, the Reedy Creek Improvement District, and the Florida's Turnpike Enterprise, building the southernmost 6.4-mile (10.3 km) between I-4 and the GreeneWay became a complex task. Eventually, they agreed on the Southern Connector Extension, as well as the 12.4-mile (20.0 km) Osceola Parkway.

Florida's Turnpike began construction of the 6.4-mile (10.3 km) extension from the GreeneWay to I-4 in 1994 and completed construction in mid 1996. The project cost almost $153 million, with $74 million coming from contributions from the private parties involved in building this route, making it possible to get from Walt Disney World to the Orlando International Airport without ever driving on Interstate 4.

In 2008, the Turnpike Enterprise began a $49 million project to reconstruct the Lake Jesup toll plaza, allowing for the inclusion of SunPass/E-PASS express lanes. The project was completed in April 2011. [6]

The Turnpike Enterprise and OOCEA (now CFX) agreed to build a partial interchange between SR 417 and Florida's Turnpike in the late 2000s, after negotiations dating back to a 1991 field study. [8] [9] The interchange is being built in two phases. The first phase, built by CFX, added ramps from southbound SR 417 to southbound Florida’s Turnpike and from northbound Florida’s Turnpike to northbound SR 417. Construction on the first phase began in September 2013 and opened on January 26, 2015. The second phase, completing the interchange, will be built by the Turnpike Enterprise with construction beginning in late 2014 and expected to be completed in 2017, several years ahead of its original completion date. [10] [11]

The OOCEA 2030 Master Plan suggests widening the entire expressway to six lanes from International Drive to the Seminole County line. [15] Florida's Turnpike Enterprise has completed a project development & environment study (PD&E) to evaluate the widening of the Seminole Expressway, the portion of SR 417 north of University Boulevard. Construction between University Boulevard and SR 434 is currently not scheduled to begin until 2020. [16]

In 2019, construction is anticipated to start on a new interchange between SR 429 (Wekiva Parkway), SR 417, and Interstate 4. This will complete the beltway around Orlando. [17]