From Wikipedia, the free encyclopedia
Lower house of the Florida Legislature

The Florida House of Representatives is the lower house of the Florida Legislature, the state legislature of the U.S. state of Florida, the Florida Senate being the upper house. Article III, Section 1 of the Constitution of Florida, adopted in 1968, defines the role of the Legislature and how it is to be constituted. [4] The House is composed of 120 members, each elected from a single-member district with a population of approximately 157,000 residents. Legislative districts are drawn on the basis of population figures, provided by the federal decennial census. Representatives' terms begin immediately upon their election. As of 2020, Republicans hold the majority in the State House with 71 seats; Democrats are in the minority with 46 seats. Three seats are vacant.

Article III of the Florida Constitution defines the terms for state legislators.

The Constitution requires state representatives to be elected for two-year terms.

On November 3, 1992, almost 77 percent of Florida voters backed Amendment 9, the Florida Term Limits Amendment, which amended the state Constitution, to enact eight-year term limits on federal and state officials. Under the Amendment, former members can be elected again after a break. [5] In 1995, the U.S. Supreme Court ruled that states could not enact congressional term limits, but ruled that the state level term limits remain. [6]

Florida legislators must be at least twenty-one years old, an elector and resident of their district, and must have resided in Florida for at least two years prior to election. [7]

Each year during which the Legislature meets constitutes a new legislative session.

On the fourteenth day following each general election, the Legislature meets for an organizational session to organize and select officers.

Special legislative sessions may be called by the governor, by a joint proclamation of the Senate president and House speaker, or by a three-fifths vote of all legislators. During any special session the Legislature may only address legislative business that is within the purview of the purpose or purposes stated in the special session proclamation. [11]

The Florida House is authorized by the Florida Constitution to create and amend the laws of the U.S. state of Florida, subject to the governor's power to veto legislation. To do so, legislators propose legislation in the forms of bills drafted by a nonpartisan, professional staff. Successful legislation must undergo committee review, three readings on the floor of each house, with appropriate voting majorities, as required, and either be signed into law by the governor or enacted through a veto override approved by two-thirds of the membership of each legislative house. [12]

Its statutes, called "chapter laws" or generically as " slip laws" when printed separately, are compiled into the Laws of Florida and are called " session laws". [13] The Florida Statutes are the codified statutory laws of the state. [13]

In 2009, legislators filed 2,138 bills for consideration. On average, the Legislature has passed about 300 bills into law annually. [14]

The House also has the power to propose amendments to the Florida Constitution. Additionally, the House has the exclusive power to impeach officials, who are then tried by the Senate.

The House is headed by a speaker, elected by the members of the House to a two-year term. The speaker presides over the House, appoints committee members and committee chairs, influences the placement of bills on the calendar, and rules on procedural motions. The speaker pro tempore presides if the speaker leaves the chair or if there is a vacancy. The speaker, along with the Senate president and governor of Florida, control most of the agenda of state business in Florida.

The majority and minority caucus each elect a leader.

*Elected in a special election. 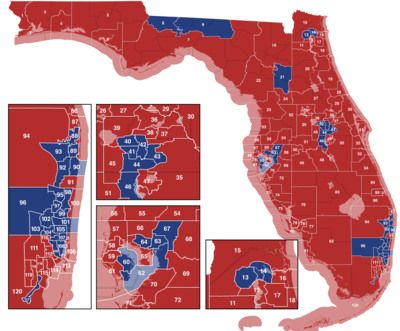 Past composition of the House of Representatives

From 1874 to 1996, the Democratic Party held majorities in the Florida House of Representatives. Following sizable GOP gains in the 1994 election, which significantly reduced the Democratic Party majority in the Florida House, Republicans captured a majority in the 1996 election. The Republican Party has been the majority party since that time in the House.

Additional information on the past composition of the Florida House of Representatives can be found in Allen Morris's The Florida Handbook (various years, published every two years for many years).