The guided missile cruiser USS Anzio sails past the Statue of Liberty at the beginning of Fleet Week 2004 in New York City. 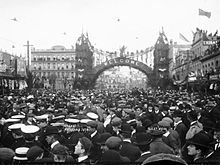 Fleet Week is a United States Navy, United States Marine Corps, and United States Coast Guard tradition in which active military ships recently deployed in overseas operations dock in a variety of major cities for one week. Once the ships dock, the crews can enter the city and visit its tourist attractions. At certain hours, the public can take a guided tour of the ships. Often, Fleet Week is accompanied by military demonstrations and air shows such as those provided by the Blue Angels.

The first Fleet Week was celebrated in San Diego, California, during the 1935 California Pacific International Exposition. [2] The years between World War I and World War II saw an increasing military build-up in both Japan and Germany, while the communist Soviet Union (USSR) was given over to the wave of Stalinist nationalism. Most United States citizens experienced little sense of urgency about foreign developments because of isolationism and concerns with the ongoing economic Great Depression. However, then- U.S. President Franklin D. Roosevelt, a former Assistant Secretary of the Navy, was intent on expanding the U.S. Navy in response to world political trends. A major aircraft company was moving to Lindbergh Field, (today more commonly known as San Diego International Airport). In this atmosphere, Fleet Week was born.

At 11 a.m. on May 29, 1935, a color guard of the U.S. Marine Corps led a parade across Cabrillo Bridge to Plaza del Pacifico, where the U.S. flag was raised to open the Exposition officially. At 8 p.m., Roosevelt spoke by telephone and designated two selected orphans to press the buttons turning on the lights which bathed the grounds in color. In his remarks, heard over the loudspeaker system, Roosevelt said: "The decision of the people of San Diego thus to dedicate the California Pacific International Exposition is, I believe, worthy of the courage and confidence with which our people now look to the future. No one can deny that we have passed through troubled years. No one can fail to feel the inspiration of your high purpose. I wish you great success."

During Fleet Week in June 1935, 114 warships and 400 military planes arrived under command of U.S. Navy Admiral Joseph M. Reeves, Commander-in-Chief of the U.S. Fleet. It was described as the mightiest fleet ever assembled under the U.S. flag. It included forty-eight battleships, cruisers and aircraft carriers, with more than 3,000 commissioned officers and 55,000 enlisted men. The U.S. Navy men visited the Exposition and, in turn, thousands of San Diegans and other fairgoers were guests on the various ships.

For years it was common for several U.S. Navy ships to dock in San Francisco, California for a similar series of events. One or more fleet ships were docked as a "visit ship" for tourists to board, and the local community took in sailors for home visits; drinks were often discounted to uniformed sailors at area bars and restaurants. The highlight of the San Francisco Fleet Week is the Air Show on San Francisco Bay with the Blue Angels as the center of attention. [3] The Air Show also features stunt planes and parachute team and coast guard demonstrations. [4] Another highlight of the Fleet Week SF is a parade of ships under the Golden Gate Bridge. [5]

The revived name of Fleet Week was applied to an expanded and more heavily publicized fleet visit in 1981, in conjunction with Columbus Day Weekend celebrations during the second week of October. Since then, the event has been held each year during the Columbus Day Weekend without a break and celebrated its 25th anniversary in 2005. The event is estimated to attract over one million people who watch the air show along the San Francisco Bay waterfront stretching from the Ferry Building to the Golden Gate Bridge. [6] The event was canceled for 2013, due to federal budgetary issues., [7] but was revived in 2014, and continues to be an annual event.

For more than 20 years, Fleet Week Port Everglades has been produced as a signature event for South Florida each spring by Broward Navy Days, a non-profit 501(c)(3). FW PEV provides an annual opportunity for residents to honor and celebrate Sailors, Marines and Coast Guardsmen for their service to their country as well as witness first-hand the latest capabilities of today's modern navy. With the support of sponsors and assistance of hundreds of volunteers representing veterans, civic and service organizations, FW PEV offers opportunities to enjoy shore leave and participate in a wide variety of recreational, vocational and community service activities. Popular events include:

The Air & Sea Show was an annual air show in Ft. Lauderdale, Florida in which military and civilian performances took place on the four mile stretch of beach from Oakland Park to Las Olas Boulevard. The show existed from 1995 until 2007.

US Naval vessels had visited New York City in a celebratory manner dating back to the aftermath of the Spanish–American War in 1898, when Commodore George Dewey was celebrated as the hero of the battle of Manila Bay. However, the first official Fleet Week began in New York City in 1982. Fleet Week in New York City is generally timed to coincide with the Memorial Day holiday weekend.

During the New York City Fleet Week, ships are docked at New York Passenger Ship Terminal on the Hudson River on the West Side of the borough of Manhattan and also at Stapleton in the borough of Staten Island. In 2012, ships visited Brooklyn for the first time, docking at the Cruise Ship Terminal.

NYC Fleet Week 1998 was May 20-27 and included the aircraft carrier USS John F. Kennedy. NYC Fleet Week 1999 included the amphibious assault ship USS Wasp. NYC Fleet Week 2002 began on May 22, and was the first Fleet Week following the September 11, 2001 terrorist attacks that destroyed the World Trade Center. Thirteen U.S. Navy ships, five U.S. Coast Guard ships, one ship representing the Canadian Navy and one representing the Danish Navy sailed up the Hudson River to piers 86 and 88 near the Intrepid Sea-Air-Space Museum and to Staten Island. US ships included USS Sentry.

New York City Fleet Week 2009 was May 20–26, 2009, with representatives from both the U.S. military and the Royal Canadian Navy. The visiting ships were:

On April 8, 2014, the Navy announced that visiting ships would be:

On April 13, 2015, the Navy announced that visiting ships would be:

On April 4, 2016, the Navy announced visiting ships would be:

On March 27, 2020, it was announced that Fleet Week had been cancelled due to the COVID-19 pandemic.

Maryland Fleet Week is an biennial tradition in Baltimore and is managed by Historic Ships in Baltimore.

1936 was the first Fleet Week for Portland, although navy ships had visited Portland previously starting in 1892 as part of civic celebrations. [19]

For 2013 all Fleet Weeks were canceled due to budget issues

Seattle, Washington includes fleet week during the annual Seafair. Seattle's Fleet Week was an outgrowth of its "Golden Potlatch" event that started in 1911. The Golden Potlatch was suspended in 1914, but was revived in 1934 as the "Seattle Potlatch of Progress and Fleet Week". This Fleet Week included a number of U.S. Navy ships.

Naval Station Norfolk opens to the public and conducts ship tours during its Norfolk Fleet Fest. [20]

Boston occasionally hosts Fleet Week as a part of larger events and sometimes as a part of their annual Marine Week.

Fleet Week and similar traditions in other cities include: