Fitbit, Inc. [1] is an American company headquartered in San Francisco, California. Its products are activity trackers, smartwatches, wireless-enabled wearable technology devices that measure data such as the number of steps walked, heart rate, quality of sleep, steps climbed, and other personal metrics involved in fitness. Before October 2007, the company was previously named Healthy Metrics Research, Inc. [2] While these devices appear to increase physical activities, [3] there is little evidence that they improve health outcomes. [4]

While activity tracking devices appear to be useful when used with other interventions to increase physical activity, [3] one review of six studies found that there is little evidence that they improve health outcomes. [4] Of five studies that looked at weight loss, one found benefit, one found harm, and three found no effect. [4] It is unclear whether activity changes occur in children and adolescents who use activity tracking devices. [9] [10]

Headquartered in San Francisco, California, Fitbit was founded on March 26, 2007 by James Park (CEO) and Eric Friedman (CTO). On May 7, 2015, Fitbit announced it had filed for IPO with a NYSE listing. [11] The IPO was filed for $358 million. [12] The company's stock began trading with the symbol "FIT" [13] on June 18, 2015. [14] After Fitbit's stocks fell more than 50% in 2016, CEO James Park announced in October that the company was undergoing a major transformation from what he called a "consumer electronics company" to a "digital healthcare company." [15]

In February 2018, Fitbit announced that it would be partnering with Adidas to release an Adidas-branded Fitbit Ionic. The special edition Ionic was released on March 19, 2018. [16]

In August 2018, Blue Cross Blue Shield Association announced a partnership with Fitbit in which BCBS will include Fitbit's wearables and fitness trackers in its Blue365 program. [17] 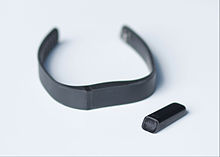 Fitbit Flex, with the functioning unit removed from the replaceable wristband.

Alongside the activity trackers, Fitbit began offering a website and mobile app for iOS, Android and Windows 10 Mobile in 2014. [18] This allowed the trackers to sync to devices such as mobile phones via Bluetooth, or to a Bluetooth-equipped computer running Windows or MacOS. Users now had the ability to log their food, activities, and weight, to track over time and set daily and weekly goals for themselves for steps, calories burned and consumed, and distance walked. The app also offered a community page where users could challenge themselves and compete against other users. [19] The social element anticipated an increase in motivation, and found that users took an average of 700 more steps per day when they had friends on the app. [19] Users could also choose to share their progress pictures and achievement badges.

The first product released was the Fitbit Tracker. [20] The company released its Fitbit Ionic smartwatch in October 2017 [21] and a redesigned, lower-priced version in 2018 called the Versa. [22] [23]

The Fitbit Charge 3, a wristband health and fitness tracker introduced in October 2018, was the first device to feature an oxygen saturation (SPO2) sensor; however, as of January 2019, it was non-functional and Fitbit had not provided an implementation timeline. [24]

The Fitbit Charge 3 comes with two different-sized bands: small and large. The small is around between 5.5 - 7.1 inches and the large is 7.1- 8.7-inches. Additionally, the screen is larger than the Charge 2 by approximately 40%. Fitbit Charge 3 comes in two color combos: a Rose-Gold case with a Blue Grey band and a “Graphite Aluminum” screen case with a Black band. [25]

On December 17, 2018, Fitbit released the Fitbit OS 3.0, which included an extended dashboard, quick logging for weight and water intake, and goal-based exercise mode. The new extended on-device dashboard (Fitbit Today) would include more data regarding sleep, water intake and weight. [26]

There are three versions of the Fitbit Versa, standard, Special, and Lite.[ citation needed]

On December 19, 2018, Emirates NBD announced its support of Fitbit Pay, providing services to the app. Emirates NBD is the first bank in the Middle East to offer this service. [27]

That same month, Fitbit added an API and open source tools to allow developers to better build apps for its smartwatch products. [29]

A 2019 study found that the Fitbit Charge 2 accurately measures the average heart rate of healthy adults during sleep, and that it is most accurate for medium range of heart rate. [33]

A 2019 study found that Fitbit Charge 2 relative to EEG, overestimated sleep efficiency by about 4%, but there was no difference in measured total sleep time. [34]

A 2019 review found that Fitbit devices, which utilize the sleep-staging feature, show a better performance than non-sleep-staging models, especially in differentiating wake from sleep. [35]

On February 20, 2014, Fitbit worked with the Consumer Protection Safety Commission to recall the Fitbit Force because some users experienced allergic reactions to the materials used in the product. [36] On March 12, 2014, the Consumer Product Safety Commission (CPSC) made the recall official. [37] At that time, there were 9,900 reports of skin irritation and 250 reports of blistering. [37]

In April 2017, a woman claimed her Flex 2 malfunctioned and caught fire, causing second-degree burns on her arm. [38] Following an investigation, Fitbit was adamant that the exploding tracker was caused by external forces, and assured customers that it was not aware of any other complaints and that they could wear their own Fitbits without concern. [39]

On March 12, 2016, Fitbit acquired smart credit card company Coin, which included key personnel and intellectual property, but excluded any of Coin's hardware products, which stopped being produced around the time of the acquisition. Fitbit shut down the Coin Rewards and Coin Developer Program during the acquisition. Coin said that existing Coin cards will continue to work until the battery runs out and that existing Coin cards will remain under their one-year manufacturer's warranty. [42] [43]

On January 10, 2017, Fitbit acquired Romania-based smartwatch startup Vector Watch SRL. Vector said that there will be no new products with the Vector name, but that existing Vector watches will continue to work. [46]

On February 13, 2018, Fitbit acquired US-based software startup Twine Health for an undisclosed amount. A Fitbit spokesperson said that “nearly all” of Twine Health's employees would start working at Fitbit. [47]

To set up and use the hardware, one has to create an account with Fitbit and agree to data collection, transfer and privacy rules. [56]

Starting in June 2011, Fitbit was criticized for its website's default activity-sharing settings, which made users' manually-entered physical activities available for public viewing. [57] All users had the option to make their physical activity information private, but some users were unaware that the information was public by default. One specific issue, which technology blogs made fun of, was that some users were including details about their sex lives in their daily exercise logs, and this information was, by default, publicly available. [58] Fitbit responded to criticism by making all such data private by default and requesting that search engines remove indexed user profile pages from their databases. [57]

The company's devices have also been used in criminal investigations; in one instance, a rape claim against an unnamed intruder was turned around to a criminal charge for false reports based on data from the claimant's Fitbit. [59] [60] [61] [62] [63]

The company's proposed sale to Alphabet has resulted in concern that Fitbit user data could be combined with other Google services data or sold for purposes such as targeted advertising, causing some to look for alternative devices. [64] In response, Fitbit stated that user data would not be used or sold for advertising by Google, citing that trustworthiness was "paramount" to the company, and that the sale would not change their historic commitment to user privacy and security. [65]

In December 2019, it was reported that the Federal Trade Commission and the Department of Justice intended to review the merger between Fitbit and Google due to concerns that the purchase would allow Google increased access to personal data. [66]

A Fitbit device played a role in solving a murder. [67] Connie Dabate was murdered by her husband Richard Dabate. Initially, Richard framed the situation, telling police and law enforcement officials that an intruder had broken into their home and fatally shot his wife. However, Connie's Fitbit tracker showed that she was at the gym at the time Richard told police his wife was shot. Using Connie's Fitbit and analyzing her movements, analysts were able to create a timeline that proved Richard had created a false story. [68]

On March 10, 2015, a woman fabricated a story [69] in which an intruder appeared in her employer's home she was staying at and raped her. Risley told police that a man had assaulted her around midnight. Police found a Fitbit lying on the floor when they arrived at the scene. Prosecutors used the Fitbit as evidence and data to determine what had occurred. The Fitbit revealed that the woman was active throughout the night, and the Fitbit surveillance analysis demonstrated the woman had not gone to bed like she stated to the police, proving that the woman had lied to the police.

A Fitbit device played a role in solving another murder in 2018. Anthony Aiello murdered his stepdaughter Karen Navarra while visiting her home and her body was found five days later. Data from her Fitbit fitness tracker showed that her heart rate spiked when Aiello visited her and stopped five minutes before he left. Aiello was arrested in September 2018 on murder charges and was booked into the Santa Clara County Jail. [70] [71]