The state park is near the site of the first landing on April 26, 1607 of Christopher Newport and the Virginia Company colonists before establishing themselves at Jamestown. The park includes cabins, areas for camping, fishing, and swimming, a public beach, and over 19 miles (31 km) of trails for hiking and biking. Virginia's most popular state park, it's visited by over a million people each year. Its main entrance is located on Shore Drive across from the beach camping entrance. First Landing State Park charges a fee for its camping facilities and for the overnight use of its cabins.

Originally built by the Civilian Conservation Corps in the 1930s, First Landing State Park is located on the Chesapeake Bay. The park, which is Virginia's most visited state park, is nestled in Virginia Beach. First Landing offers boating, swimming, nature and history programs, hiking, biking, picnicking, a boat launch, cabins and 19 miles (31 km) of trails on 2,888 acres (11.69 km2). It also has campsites that have water and electric hook-ups and nearby access to restrooms and showers. The park's name was changed in 1997 from Seashore State Park to First Landing State Park to reflect its heritage as the first place where members of the Virginia Company landed (though its former name is still commonly used by Tidewater locals). 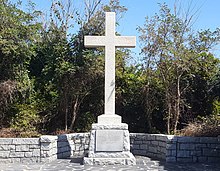 Development of the Seashore State Park began in 1933 by the Civilian Conservation Corps on 1,060 acres (4.3 km2) of donated land. Most of the workers were African American men. The new park opened on June 15, 1936. Several additions of land and adjustments of the border with Joint Expeditionary Base East resulted in the current total area of the park of 2,888 acres (11.69 km2).

The 3,598-acre (14.56 km2) Seashore Natural Area, a portion of which is located within the park, was listed as a National Natural Landmark in 1965. The designation recognized the significance of the park's forested dunes and semitropical vegetation. [1] In 1997, the park's name was changed from Seashore State Park to First Landing State Park to reflect its heritage as the first place where members of the Virginia Company landed. 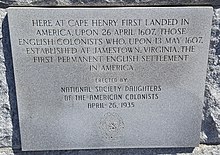 A cross was erected in the state park by the Daughters of the American Colonists on April 26, 1935 to mark the location of the first landing by English colonists at the site, along with a placard at the base of the cross with the dates of the landing and the settlement at Jamestown, Virginia.

The Seashore State Park Historic District is a 2,889-acre (11.69 km2) historic district (comprising the entire park) with significance dating to 1933 for its architecture/engineering. It includes work by CEGG Assoc. LC, the National Park Service, and others. It includes eight contributing buildings, six contributing sites and 10 contributing structures. [2]

The park was the first planned state park of the Virginia State Park system. Its plan was designed and developed with extensive consultation of the National Park Service, which provided architectural drawings and plans, and which educated about traffic circulation and other aspects of already-designed U.S. national parks. The work of actually building roads and buildings and other structures and features of the park was accomplished by Civilian Conservation Corps workers, who were housed in three camps of 200 men each. [4]