From Wikipedia, the free encyclopedia
(Redirected from Fight Hunger Bowl)

The plans for the inaugural 2002 San Francisco Bowl were established on Dec. 2, 2002, when the Air Force Falcons football program accepted a bid to play against an undetermined team from the Big East Conference. [4] Their initial sponsor was Diamond Foods, a producer of walnuts and other nuts under the Emerald brand name, resulting in the name Diamond Walnut San Francisco Bowl, and later the Emerald Bowl.

In 2010, Kraft Foods became the sponsor of the bowl and announced the new name, which the corporation launched as part of a broader hunger relief program. [5] According to Sports Illustrated, the executive director of the bowl, Gary Cavalli, was paid a $377,475 salary in 2009. [6] Mondelēz International continued to support the game and the program related with Feeding America in 2013.

On July 12, 2016, the San Francisco 49ers NFL team announced that it had taken over management of the Foster Farms Bowl from the San Francisco Bowl Game Association, and also announced a new, four-year broadcast rights deal with Fox Sports, replacing ESPN. [9]

The game had a contract to host the Pac-12's sixth-place team during the 2010 through 2013 seasons. There were multiple contracts that determined the opponent. In 2011, the Pac-12 team's opponent was Illinois, replacing Army, which did not achieve bowl eligibility; in 2012, it was Navy; and in 2013, it was BYU. Had these teams not qualified for bowl eligibility, they would have been replaced by teams from the Atlantic Coast Conference (ACC) or the Mid-American Conference (MAC).

Beginning with the 2014 season, teams come from the Pac-12 and Big Ten conferences. [12] With Oregon's appearance in the 2018 edition, Colorado and Washington State are the only Pac-12 members who have not appeared in the game.

Because AT&T (now Oracle) Park is a baseball park and not normally used for football, arrangement of the field required both teams to be on the same sideline (southeast), separated by a barrier at the 50-yard line (in shallow right-center field). The opposite sideline (northwest) ran along the third base line, with an end zone near the first base dugout, and the other near the left field wall. Primary seating was in the third base grandstand, with temporary bleacher seating in right-center field.

Rankings are based on the AP Poll prior to the game being played. 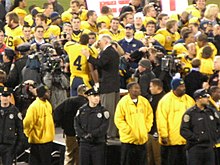 Teams with a single appearance